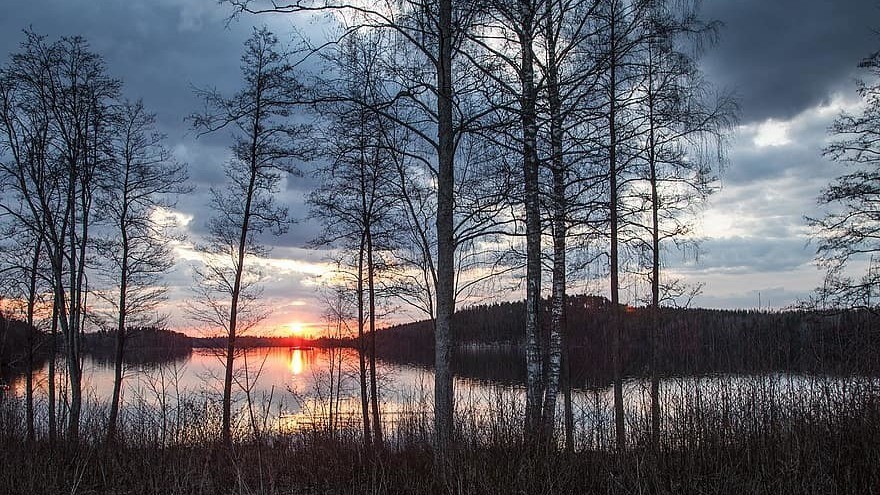 Jean Sibelius’ Symphony No. 4 in A minor enters a dark, austere, and occasionally terrifying sonic landscape. At first listen, it is undoubtedly the strangest and most unsettling of Sibelius’ seven symphonies. Its four movements probe frigid, mysterious depths. Yet, upon entering this forbidding territory, we are rewarded with glimpses of rugged beauty and awe-inspiring power.

Sibelius called the Fourth “a psychological symphony.” It is the stuff of Expressionism, murky dreams, and Sigmund Freud’s excursions into the unconscious. Completed in 1911 as Europe teetered on the brink of the First World War, its atmosphere was once summed up by Sibelius with a gloomy quote by the playwright, August Strindberg: “Det är synd om människorna” (“One feels pity for human beings”). In 1908, the composer had confronted his own mortality with the removal of a cancerous tumor from his throat. His diary entries from the time speak of “dark shadows.” Artistically, he felt increasingly alienated from the stylistic trends of music written by his Central European contemporaries, and wrote to a friend that the Fourth Symphony “stands as a protest against present-day music. It has absolutely nothing of the circus about it.”

The April 3, 1911 premiere in Helsinki was met with confusion and hostility. The austerity of the music earned it the nickname, Barkbröd (“Bark-bread”), a reference to the nineteenth century Scandinavian famine during which time the people resorted to eating tree bark. “Everything was so strange,” one reviewer wrote. According to the composer’s wife, “People avoided our eyes, shook their heads. Their smiles were embarrassed, furtive or ironic. Not many people came backstage to the artists’ room to pay their respects.” Yet, the critic Oskar Merikanto wrote, “I feel as if entirely new worlds were now opening for Sibelius as a composer of symphonies, worlds which have not been shown to others and which he, with his astonishingly highly developed sense of colour and melody, can see and describe to others.” Sibelius stood by his vision with intense conviction, commenting in the 1940s, “I cannot find a single note in it that I could remove, nor can I find anything to add. This gives me strength and satisfaction.”

In the opening bars of the first movement (Tempo molto moderato, quasi adagio), the pitches C, D, F-sharp, and E emerge out of the depths of the orchestra (cellos, basses, and bassoons) with a brusque growl. These pitches outline a fragment of the whole-tone scale, reordered to hint at a searing tritone (the “devil’s interval”). This dissonant interval pervades the entire symphony, soon returning as an icy flash in the horns. Alex Ross observes that

The first few bars of the symphony extrapolate a new dimension in musical time…[the opening motif] feels like the beginning of a major thematic statement, but it gets stuck on the notes F-sharp and E, which oscillate and fade away. Meanwhile, the durations of the notes lengthen by degrees, from quarter notes to dotted quarters and then to half notes. It’s as if a foreign body were exerting gravitational force on the music, slowing it down.

This disintegrating, failed thematic statement opens the door to the forlorn voice of the solo cello. As one faltering phrase leads to the next, we find ourselves drifting through a bleak and barren landscape. There is the sensation of gradual forward motion, but we end up going nowhere. Climactic moments of arrival embody the timeless majesty and permanence of a towering mountain. Perhaps they contain a spiritual pull similar to what Sibelius felt when he visited the mighty Finnish peak, Koli, in 1909 and listened to the “sighing of the winds and the roar of the storms.” As the first movement unfolds, we encounter hushed, shivering string tremolo and ghostly cries in the woodwinds. Vague echoes of the third movement of Berlioz’ Symphonie fantastique can be heard in the pastoral oboe and the distant thunder of the timpani.

The second movement (Allegro molto vivace) begins as a frolicking and seemingly carefree dance, set in the Lydian mode. But soon, ominous shadows fall. What was at first an innocent waltz turns into a demonic scherzo. Again, we get the sense of a gradual faltering and slowing of momentum. The tritone rises out of the shadows like a snarling ghost. The tonal center disintegrates into an amorphous sea. The movement fades away abruptly with three quiet timpani taps.

In the third movement (Il tempo largo), a theme emerges gradually out of disparate, halting fragments. Ghostly strands search for a way forward and drift into silence. As a lamenting conversation unfolds between instrumental voices, again we get the sense of music on the edge of disintegration. A majestic yet mournful chorale develops, rises towards a climax but ultimately falls short. We are left with the pitch of C-sharp, which repeats with a sense of numb alienation.

While composing the Fourth Symphony, Sibelius worked on an orchestral song setting of Edgar Allan Poe’s The Raven, commissioned by the prominent soprano, Aino Ackté. The project, which Sibelius found to be an annoying distraction, remained unfinished. But some of the music from The Raven found its way into the Symphony’s final movement (Allegro). This restless rondo is launched into motion with the same pitch, C-sharp, which concluded the previous movement. The opening bars erupt in jubilant frivolity, with sparkling splashes in the glockenspiel and vigorous lines in the solo cello. Again, the celebration is short-lived as gloomy clouds gather on the horizon. There is none of the triumph and transcendence we experience at the end of Sibelius’ Fifth Symphony. Instead, the final bars offer only grim, stoic resignation. For many listeners, the circular, unresolved nature of this music is deeply disturbing.

I have thought I heard a couple of explosive world catastrophes. Probably they are extinguished dark suns which crash together with such racket and power that they light up again and throw sparks around themselves… Furthermore, we hear in the finale the regular rocking of ether waves, and at length we are carried back into the incomprehensible circulation of eternity, into the same dusk of nebulae where this whole cosmic symphony originated.

Here is Leif Segerstam’s 2006 recording with the Helsinki Philharmonic Orchestra. If you are new to this music, I recommend that you listen multiple times: