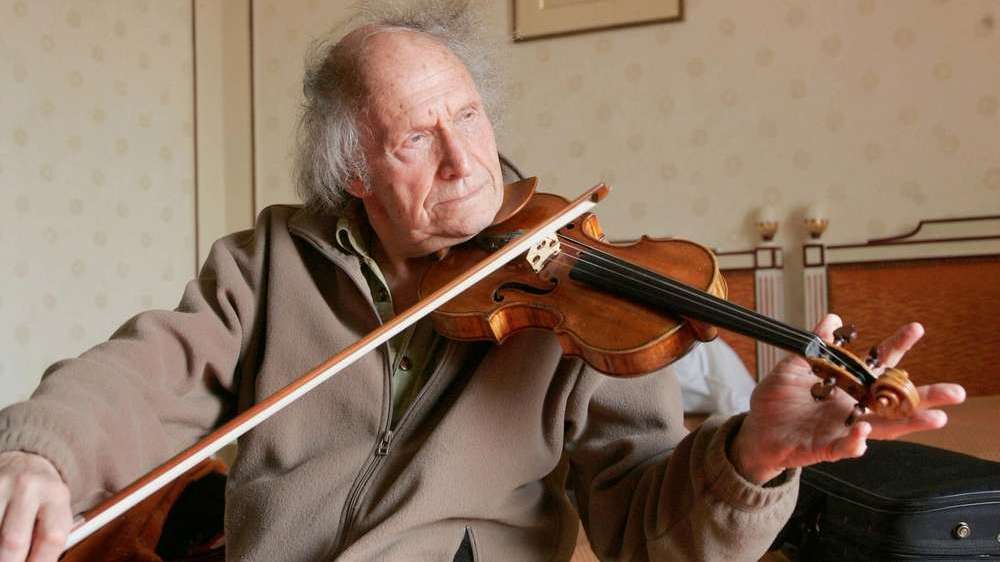 Ivry Gitlis, the legendary Israeli violinist, has passed away. He was 98.

Born in Haifa, Palestine to Russian-Jewish parents, Gitlis began playing the violin at the age of five. His teacher, Elisheva Velikovsky, had been a student of the German violinist, Adolph Busch. (About the same time, a  young Zvi Zeitlin studied with Velikovsky). Later, Gitlis studied with Mira Ben-Ami (a student of Joseph Szigeti). The influential violinist Bronisław Huberman opened doors which allowed Gitlis to move to Paris in 1933. In Europe, he studied with Georges Enescu, Jacques Thibaud and Carl Flesch, among others. This rich lineage highlights Ivry Gitlis’ links to the prewar “Golden Age” of violin playing.

On June 21, 1940, Gitlis sailed across the English Channel on the last ship to leave occupied France. He later remembered that the tugboat, intended to carry 500 passengers, was filled with “4,500 Poles, Jews and clergymen” and miraculously escaped being sunk by the Germans. During the Second World War, Gitlis worked in a munitions factory and then performed for Allied troops as part of the British Army’s artists unit.

Ivry Gitlis’ career blossomed in the 1950s, with a Paris debut and concerts throughout the United States. In 1963, he became the first Israeli violinist to perform in the Soviet Union. In 1968, he participated in The Rolling Stones Rock and Roll Circus film project, performing “Whole Lotta Yoko” with Yoko Ono and The Dirty Mac. In 1990, Gitlis was designated a UNESCO Goodwill Ambassador.

In his later years, Gitlis was as much a philosopher, actor, and teacher as a musician. “When you make music, this is your breath,” he said, observing that neshama, the Hebrew word for “soul” also refers to breathing. A wild, spontaneous sense of the “life force” is evident in Gitlis’ playing.

Saint-Saëns: Introduction and Rondo Capriccioso in A minor, Op. 28

Ivry Gitlis’ soulful, singing tone and free-spirited sense of style are on display in this exhilarating performance from the 1960s:

Gitlis once said, “rubato is the art of playing in tempo.” We can hear this elastic yet natural approach to phrasing in this excerpt from Brahms’ Violin Sonata No. 3:

In this clip from 1968, Ivry Gitlis joins the great French-Italian jazz violinist, Stéphane Grappelli, who accompanies at the piano. The sense of freedom in Gitlis’ artistry is apparent in this performance: