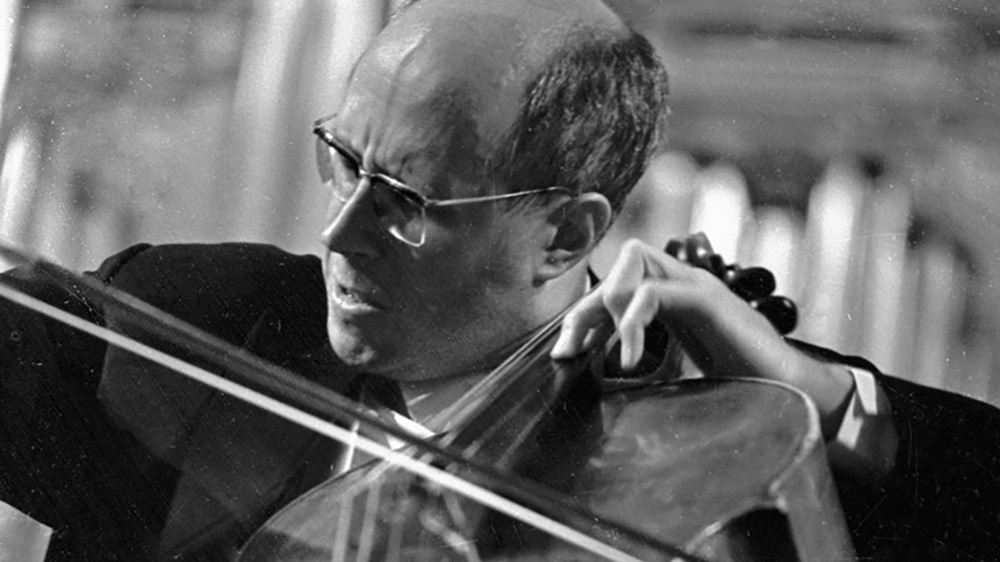 In 1943, the 16-year-old Mstislav Rostropovich was in Dmitri Shostakovich’s orchestration class at the Moscow Conservatory. When Shostakovich heard the young cellist play, he was overcome with praise, commenting on the “the intense, restless mind and the high spirituality that he brings to his mastery.” Later, he wrote,

Mstislav Rostropovich, never resting, always searching and growing—is of such significance that it seems already possible to claim his name will come to be given to a whole era of cello playing, an era in which the range of possibilities for the instrument has been immeasurably broadened, and in which players have been set new tasks and new problems.

Shostakovich wrote both of his Cello Concertos for Rostropovich. The First, completed in 1959, is a thorny and virtuosic work filled with the recurring DSCH motif (Shostakovich’s initials transferred to musical notation) and mocking quotes of Stalin’s favorite song. Famously, Rostropovich memorized it in four days before giving the premiere.

Composed in Crimea in the spring of 1966, the Second Cello Concerto is from the composer’s late period. It is symphonic in nature, with the instrumental voices of the orchestra rising to equal prominence to engage in a haunting dialogue with the solo cello. In a letter to his friend, Isaak Glikman, Shostakovich wrote, “It seems to me that the Second Concerto could have been called the Fourteenth Symphony with a solo cello part.” Throughout the Concerto, we hear distant echoes of Mahler’s symphonies. For example, notice the recurring voice of the solo horn with its wandering, nocturnal lament. Near the end of the final movement, there is a grotesque parody of the triumphant fanfares which conclude Mahler’s First Symphony.

The first movement (Largo) begins with the lamenting voice of the solitary cello. A mournful melodic strand, set with falling, sighing half steps, opens the door to a dark, ever-intensifying musical conversation. The instrumental voices seem to awaken gradually to find a dark, ominous, yet strangely beautiful, landscape. The woodwinds enter in their lowest registers as a wrenching, anguished choir. The second theme arrives as a bizarre, sardonic dance initiated by the xylophone and woodwinds. A single, motivic fragment repeated with obsessive persistence, leads to a frenzied climax. Then, the music disintegrates into a solo cello cadenza, punctuated by violent bass drum strikes.

The main theme of the second movement (Allegretto) is a grotesque quote of an Odessa street vendor’s song, Bubliki, kupitye, bubliki (“Pretzels, Buy My Pretzels!”). The commentator David Hurwitz suggests there is a “bitter, forced, hollow joy” in the Jewish-flavored folk melodies which crept into Shostakovich’s last works. As the music progresses, the falling half step motif from the beginning of the first movement is heard as a persistently repeating jeer in the horns, bassoons, and throughout the orchestra.

This demonic scherzo leads without pause to the final movement (also Allegretto). The snare drum accompanies darkly comic fanfares in the horns. This fanfare figure reaches a climax near the end of the movement with a parody of the conclusion of Mahler’s First Symphony. There is no triumphant moment of transcendence, as in the Mahler. Instead, Shostakovich’s fanfares lead to a restatement of the second movement’s Pretzel song and a sharp crack of the whip. The final bars fade away with an incessant “tick-tock” in the percussion. We are left with absurdity and quiet menace.

Here is Mstislav Rostropovich’s 1976 recording with Seiji Ozawa and the Boston Symphony Orchestra: