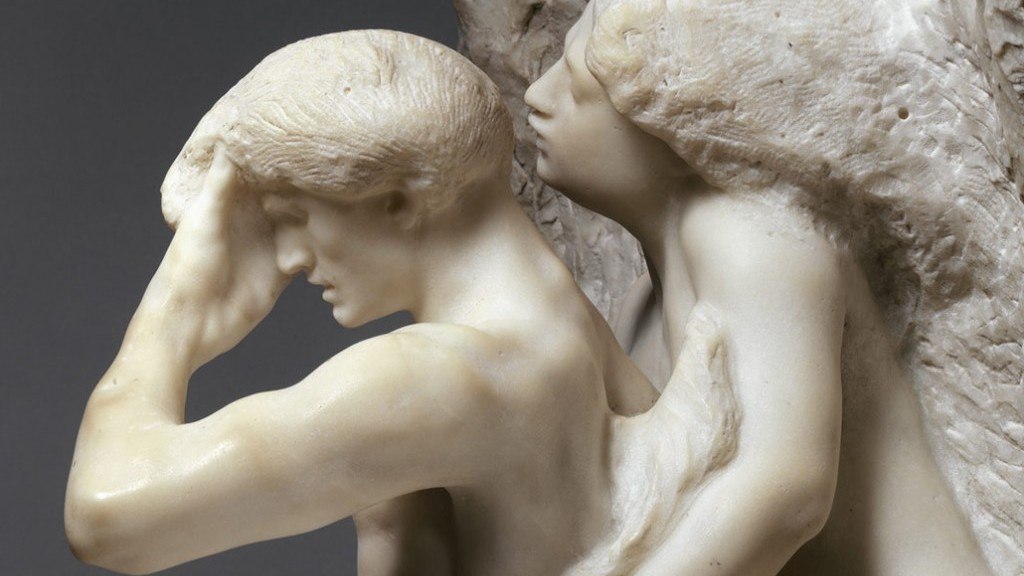 “Myths never were, but always are,” wrote the 4th century Roman commentator, Sallustius.

So it is with the story of Orpheus, which inspired Igor Stravinsky and George Balanchine in mid-twentieth century Hollywood as deeply as it did Claudio Monteverdi in 1607 and the lyric poet Ibycus in the 6th century BC.

In 1946, Stravinsky received a commission from Balanchine and the impresario, Lincoln Kirstein, for a contemporary treatment of the Orpheus story. The resulting thirty minute long neoclassical ballet in three tableaux was premiered by the Ballet Society on April 28, 1948. It was this performance that launched New York City Ballet as a permanent organization. (Orpheus’ lyre, as depicted by the production’s set designer, Isamu Noguchi, remains the company’s official symbol).

The elements of melancholy, of love, and of mystery in the Orpheus tragedy always fascinated me. Orpheus the demigod—a son of Apollo and the muse Calliope—introduced the arts and civilized life amongst the savage peoples. He was a poet and a prophet, also learned in medicine and the history of the heavens. Orpheus, by the power of Sun, tamed savage beasts, made the trees follow him, and awakened inanimate nature into life and rapture. He played so divinely on the lyre that all Nature stopped to listen to his music. When his wife Eurydice died, he went after her to Hades, and the strains of his lyre softened even the stern gods of the dead. Eurydice was released, and followed him to the upper world.

Stravinsky’s score finds the ultimate purity of expression in a kind of restrained formality, austerity, and detachment. It feels magically distant and dreamlike. The composer described the character of the music as “a long sustained, slow, chant.” The mythic story expresses eternal truths which transcend its origins in ancient Greece. Similarly, Stravinsky’s music avoids “unessential ethnographic details for the sake of a higher symphonic reality.” The piece unfolds with the pristine, well-ordered lines of early polyphony. Stravinsky studied the music of Monteverdi, which he described as “amazingly modern and, if one can say such a thing, near to me in spirit,” particularly in terms of its rhythmic invention.

As the first tableau opens, “Orpheus weeps for Eurydice. He stands motionless, with his back to the audience.” The mournful strumming of Orpheus’ lyre can be heard in the hypnotic, descending lines of the harp, set in the Phrygian mode. The first Air de Danse (2:26) arrives as a rude interruption with the solo violin (often considered the devil’s instrument), rising over a persistent walking bass line. The Angel of Death arrives (5:36) amid a mysterious blur of wind sonorities and shifting colors. As the Angel leads Orpheus to Hades (7:01), we hear the ghostly, supernatural voice of the solo trombone, accompanied by shivering string tremolo, followed by a solitary trumpet call. As Scene 1 ends, “the Angel and Orpheus reappear in the gloom of Tartarus.”

The second tableau begins with the “agitation and their threats” of the swirling Pas de Furies (9:56). Orpheus soon calms these tormented spirits with the sound of his lyre (12:51). In this second Air de Danse, a stately Neo-Baroque duet emerges in the oboes, concluding with a canonic conversation between the slightly deeper-toned English horn and harp. In the Pas d’Action which follows, “Hades, moved by the song of Orpheus, grows Calm. The Furies surround him, bind his eyes and return Eurydice to him.” (16:47). Orpheus and Eurydice are reunited with the quiet, sensuous warmth and intimacy of the Pas de Deux (18:16). Yet, joy soon melts away. When Orpheus tears the bandage from his eyes, breaking his vow, the music stops and there is a terrifying moment of silence. Eurydice falls dead. “Now, Bacchantes attack Orpheus, seize him and tear him to pieces” with a ferocious Pas d’Action filled with jagged rhythms that might remind you of the Sacrificial Dance from the  Rite of Spring (25:11).

With the brief third tableau, the ballet ends where it began (27:31). Again, we hear the mournful harp lines. This time, the strings emerge with an icy ponticello (the raspy sound created when the bow is played next to the bridge). In this tragic Apotheosis, “Apollo appears. He wrests the Lyre from Orpheus and raises his song heavenwards.” A numb fugue between the horns brings a sense of serene order.

Music is something that occupies architecturally a certain portion of time. In the dance, unless your body fills time, occupies time, as music does, then it means nothing. Gesture is meaningless.