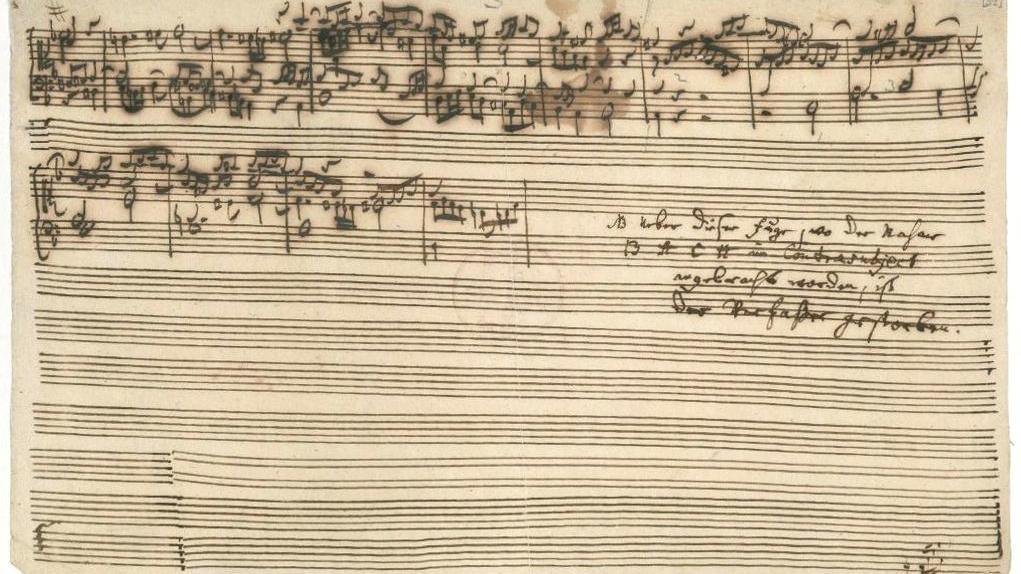 The Art of Fugue was one of J.S. Bach’s final monuments to musical posterity.

Written during the last ten years of the composer’s life, the collection is made up of 14 fugues and four canons which develop from a single, sublimely simple musical subject. As the work unfolds, Bach moves from double, triple, and mirror fugues to a quadruple fugue in an increasingly complex and technically varied exploration of contrapuntal possibilities. The music was notated on an open score with independent staves, suggesting that it can be played by any combination of instruments.

Ultimately, The Art of Fugue takes us on an unresolved journey. The final fugue breaks off abruptly in the middle of its third section. In these final lines, Bach signs his name in the music, using a motif (B-flat, A, C and B-natural) which corresponds to B-A-C-H in the German alphabet. A message in the manuscript which has been attributed to Bach’s son, Carl Philipp Emanuel, reads, “At the point where the composer introduced the name B-A-C-H in the countersubject to this fugue, the composer died.” This made-for-Hollywood account has been discredited by scholars. In the final months of Bach’s life, his eye sight and general health would not have allowed him to pen such a score. Bach began editing The Art of the Fugue before his death, something he never did before finishing a piece. The completed manuscript could have been lost. Or perhaps it was Bach’s intention to lead us up to the contrapuntal summit, only to trail off in middle of a measure. Perhaps Bach, the great teacher and improvisor, wanted us to realize that the compositional solutions to this given problem are endless. Perhaps he was saying, “Here are all of the tools. Now, you finish it.”

The Italian composer Luciano Berio (1925-2003) took up this challenge in his 2001 adaptation for 23 players, entitled Contrapunctus XIX. Throughout his works, Berio forged a creative path forward by revisiting the past and casting it anew. Much of his music emerges out of quotes and transcriptions. Contrapunctus XIX demonstrates the timelessness, adaptability, and eternally relevant nature of Bach’s music. Rather than completing Bach’s fugue, Berio preserves a sense of openness and possibility. In the final bars, clear contrapuntal lines melt into a dissonant collection of pitches, outlining the B-A-C-H motif.

In music, as I find myself forever saying, things don’t get better or worse: they evolve and transform themselves.

Here is the original unfinished fugue as Bach wrote it, performed by Schaghajegh Nosrati:

Featured Image: The final page of Bach’s unfinished manuscript for The Art of Fugue