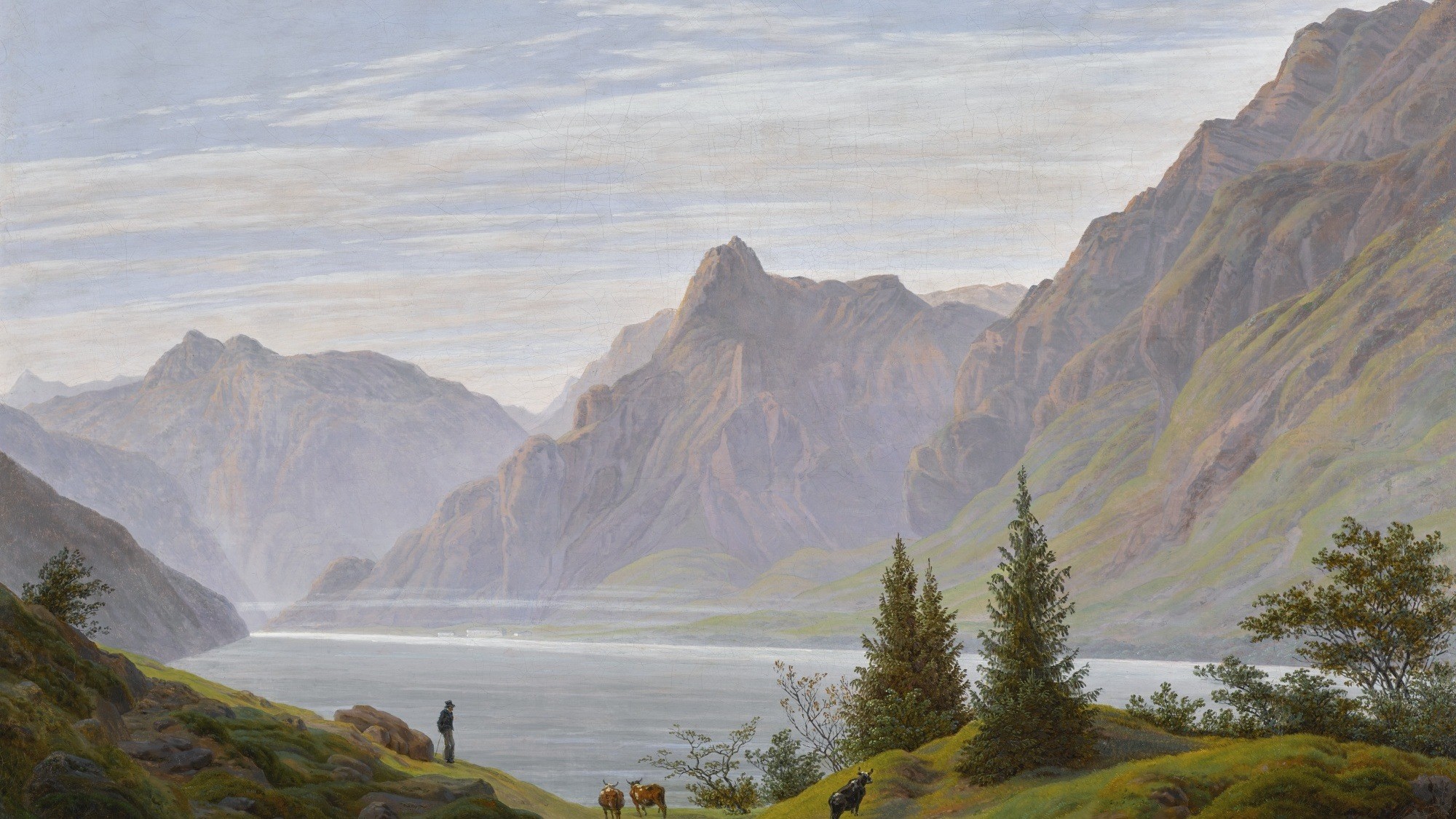 The Fourth is the only symphony to which Anton Bruckner added a subtitle, “Romantic.” The word might bring to mind the mythical operas of Wagner and the triumph of the individual in a world filled with struggle and pathos. Yet, Bruckner’s “Romantic” Symphony inhabits territory which is more cosmic and elemental. It is the world of nature, punctuated by the mystical call of the horn, with its ancient hunting connotations. Many years after composing the first version of the Fourth Symphony, Bruckner was compelled to write a program which paints the picture of a Medieval city at dawn, proud knights on horseback, “woodland magic,” “forest murmurs,” and “birdsongs.” Ultimately, these Romantic images, almost certainly tacked on after the work was composed, fade into irrelevance as we enter this monumental piece of absolute music.

Programatic stories take us on a linear journey towards a resolution. Yet as Bruckner’s music unfolds, it revels in the majestic grandeur of the moment. It forces us to slow down and enter a space of meditation and eternal mystery. The musicologist, Deryck Cooke, suggested that Bruckner was “the first symphonic composer to take up the metaphysical challenge of Beethoven’s Ninth.” Cook famously outlined Bruckner’s unique handling of symphonic form with this description:

Sonata form is a dynamic, humanistic process, always going somewhere, constantly trying to arrive; but with Bruckner firm in his religious faith, the music has no need to go anywhere, no need to find a point of arrival, because it is already there. The various stages of the formal process are not offered as dynamic phases of a drama, but as so many different viewpoints from which to absorb the basic material…Experiencing Bruckner’s symphonic music is more like walking round a cathedral, and taking in each aspect of it, than like setting out on a journey to some hoped-for goal.

The first movement begins as an intense, hushed rumble. As with the opening of Beethoven’s Ninth Symphony, sound emerges just above silence. It’s as if the volume has been turned up suddenly to reveal some kind of previously imperceptible, eternally present celestial hum. This otherworldly sound, created by tremolo in the strings, is felt as much as it is heard. It opens the door to a distant, plaintive horn call. The voice of the horn, simultaneously heroic and lamenting, returns throughout the Fourth Symphony as a persistent, haunting presence. In these opening bars, it can be heard as a mystical “summons” from the depths of time. As the music  awakens fully, we have the sense of Bruckner pulling out all of the stops on his mighty orchestral “organ.” The powerful second theme unfolds with the distinctive duple-triple (2+3) rhythm that has been called the “Bruckner rhythm.” The sunny, almost dancelike third theme is an example of what Bruckner called a gesangsperiode (“song period”). In this theme, notice the way three distinct melodic lines combine, simultaneously. The development section builds to a soaring brass chorale before returning to the hushed mystery of the opening. The use of orchestral “choirs” (a conversation between instrumental sections) and the building of tension through repeated, crescendoing blocks echo the last two symphonies of Schubert. The coda concludes with a return of the opening horn call (the interval of a perfect fifth), this time reaffirmed as a titanic fortissimo.

Allusions to Schubert return in the second movement, with the opening theme propelled forward by a “walking” pizzicato bass line. Set in somber C minor, this theme, introduced by the cellos, suggests a funeral march. The solemn procession leads us deep into the stillness of the forest where, for a moment, we are left with birdsongs and distant horn calls. In its final moments, as this introspective movement reaches a climax, the orchestra is once again transformed into a majestic pipe organ in which all the stops are pulled out. As this passage fades away, listen for the sunny statement in the woodwinds (13:53), where again the spirit of Schubert seems to shine through. In addition to looking back at Schubert, there are passages in this movement which seem to foreshadow Mahler symphonies to come. The third movement of Mahler’s First Symphony, also a funeral march, opens and closes with ominous footsteps in the timpani. The final moments of Bruckner’s funeral march fade away similarly, with a forlorn, wandering conversation between the horn and clarinet.

The Scherzo is a vigorous and joyful celebration of the hunt. In the opening bars, distant fanfares echo in the horns and trumpets, outlining the first movement’s 2+3 “Bruckner rhythm.” A cosmic crescendo unleashes the energy and vitality of nature. At moments, the exuberance of the hunt is tempered by a refreshing stillness, punctuated by distant echoing horn calls. The Trio section suggests a bucolic Austrian peasant dance.

The haunting opening bars of the Finale evoke the suspense of the bridge which precedes the final movement of Beethoven’s Fifth Symphony. It begins with an ominous, pulsating B-flat pedal tone deep in the cellos and basses. As a mighty crescendo builds, the hunting fanfares of the previous movement return in the horns. Powerful octaves give us the sense of an organ improvisation. Then, suddenly we arrive at the home key of E-flat major, with a heroic return of the horn call from the opening of the Symphony (2:40). Formally, this awe-inspiring moment of arrival is the musical equivalent of a cathedral’s massive stone column. The music which follows takes us on a far-reaching and unpredictable dramatic journey. Soaring expressions of faith break off into ghostly silences. There are brief echoes of the calls of hunting horns (14:57). We get the sense of a process unfolding that will somehow bring resolution to this vast, cosmic Symphony. This search for finality extends into the astonishing coda, which begins as a ghostly whisper and moves through an expansive harmonic scheme which ultimately leads to blazing sunlight. The penultimate chord seems to reach into the heavens before falling back into its massive E-flat major resolution.

For fifteen years after the initial sketch in 1874, Bruckner continuously revised the Fourth Symphony. As a result, the Symphony exists in at least seven authentic versions. This 1970 recording, featuring Herbert von Karajan and the Berlin Philharmonic, is Robert Haas’ edition, based on Bruckner’s 1881 manuscript:

3 thoughts on “Bruckner’s Fourth Symphony: Nature and the Call of the Horn”