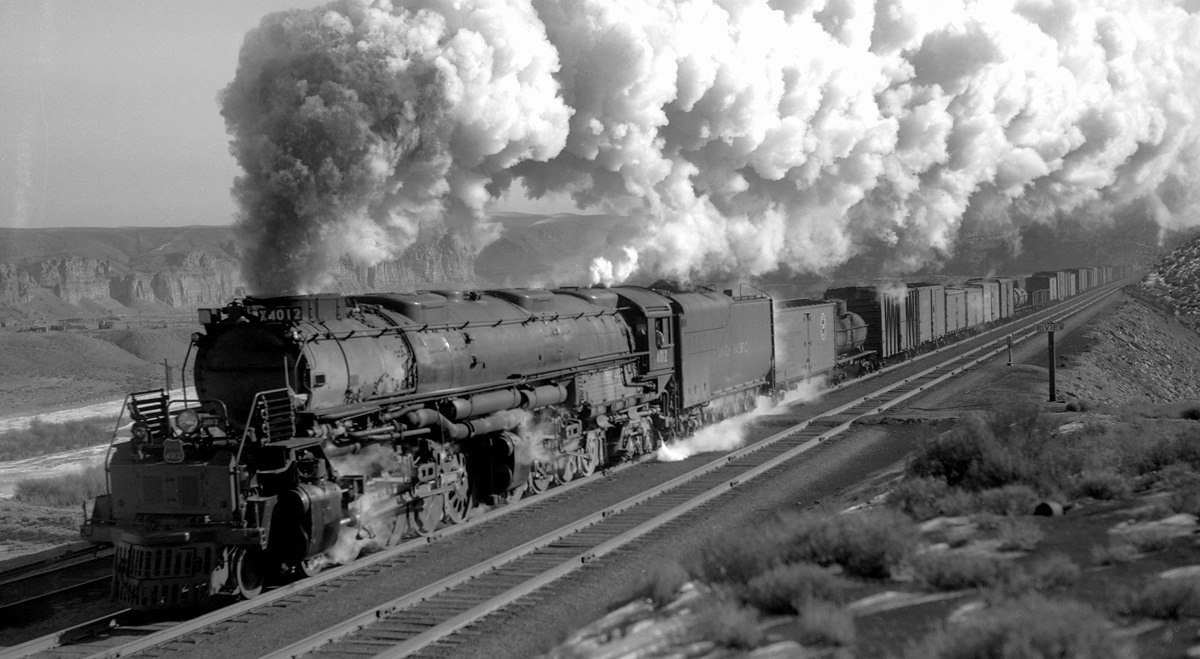 Music reflects the sounds of the time.

In the Middle Ages and Renaissance, music was centered around the human voice and the motion of the body through dance. Music of the eighteenth century emerged from the pastoral sounds of nature, hunting horns, and the bugle calls of the battlefield. Throughout the nineteenth and twentieth centuries, music got louder and more discordant amid the mechanized roar of the Industrial Revolution. Perhaps electricity and computers inform our contemporary sound world.

The steam engine was a central innovation of the Industrial Revolution. Hissing and spewing smoke and cinders, steam locomotives seemed to breathe like living creatures. In music, some depictions of the steam locomotive celebrated thrilling motion, modernity, and a glistening, futuristic machine age.

Let’s listen to five pieces from the twentieth century that were inspired by trains:

The Swiss composer Arthur Honegger (1892-1955) wrote, “I have always loved locomotives passionately. For me they are living beings whom I love as others love women or horses.”

Honegger’s 1923 orchestral piece, Pacific 231, gives us a visceral sense of building momentum and the release of energy. The title refers, not to a particular train, but to a class of large steam locomotives in which the arrangement of axles was 2-3-1. The piece is a fascinating exercise in the relationship between tempo and rhythm. On one level, the gradual shortening of note values creates a sensation of acceleration. At the same time, the overall tempo slows. We feel the building pressure and the effort of the initial motion. We can feel when the locomotive is chugging up an incline and when it is coasting downhill on pure momentum. In the final moments, the brakes are hit, the steam releases, and the mighty machine grinds to a halt. The rhythm of the locomotive becomes a poetic drama.

It opens with an objective observation, the calm respiration of the machine at rest, the effort of the start, a gradual increase in speed, ultimately attaining the lyrical stage, the pathos of a train 300 tons in weight launched in the dark of night at 120 kilometers an hour.

Charles Ives’ train takes a metaphysical track. Written in 1925 as a phantasy for solo piano, The Celestial Railroad is based on Nathaniel Hawthorne’s short story. It’s a dreamy allegory based on John Bunyan’s 1678 novel, The Pilgrim’s Progress, in which the narrator takes a train ride from the sinful and broken City of Destruction to the Heavenly Celestial City.

This unpublished piano work developed later into the second movement (Comedy: Allegretto) of Ives’ Fourth Symphony. It’s a collage of sound in which fragments of folk melodies emerge and dissipate. As with so many of Ives’ pieces, the final bars drift off abruptly. The surreal stream of music takes on the ephemeral quality of a fleeting dream.

The 1930 Suite Symphonique by the French composer Jacques Ibert (1890-1962) offers a jazzy portrait of Paris. It’s music that is filled with echoes of George Gershwin, Duke Ellington, and Tin Pan Alley. Bustling with the frenetic energy of the Jazz Age, Ibert’s Suite is a celebration of glistening, streamlined machines. It opens with an exhilarating ride on Le Métro.

Toccata for Toy Trains is a work of cinematic as well as musical art. The short 1957 film by the modern industrial designers Charles and Ray Eames is a whimsical celebration of toy trains. The music was written by Elmer Bernstein who was famous for numerous Hollywood film and television scores. After becoming acquainted with the toys, Bernstein composed the work as a standalone piece. The film was shot on a four foot table with the strong and weak beats of the score mapped out. Elmer Bernstein’s Toccata for Toy Trains suggests the witty neoclassicism of Copland and Stravinsky.

Steve Reich’s string quartet, Different Trains, plays with our perception of time and memory. The incessant motion of the train becomes hypnotic amid a never-ending, blurred landscape.

The concept for the piece came from my childhood. When I was one year old, my parents separated. My mother moved to Los Angeles and my father stayed in New York. Since they arranged divided custody, I traveled back and forth by train frequently between New York and Los Angeles from 1939 to 1942 accompanied by my governess. While the trips were exciting and romantic at the time, I now look back and think that, if I had been in Europe during this period, as a Jew I would have had to ride very different trains. With this in mind I wanted to make a piece that would accurately reflect the whole situation.

The first movement (America – Before the War) evokes the optimism and bustle of industrial America. We hear fragments of recorded interviews with Reich’s childhood caretaker, Virginia and Lawrence Davis who worked as a railway Pullman porter. Phrases from their reminiscences are repeated and developed in an additive process. They become melodic fragments mirrored by the instruments of the quartet. In the second movement (Europe – During the War), train whistles become air raid sirens. The nostalgic memories of the first movement are replaced with the darker memories of concentration camp survivors who were on a different kind of train. The final movement (After the War) melds the experiences of both groups. As time rolls on, there is a sense of both sunshine and melancholy. Having relived the glories of the great American steam locomotives, Mr. Davis laments that “today, they’re all gone.” The final bars float away, finding redemption and a renewed faith in humanity.

2 thoughts on “All Aboard! Five Pieces Inspired by Trains”