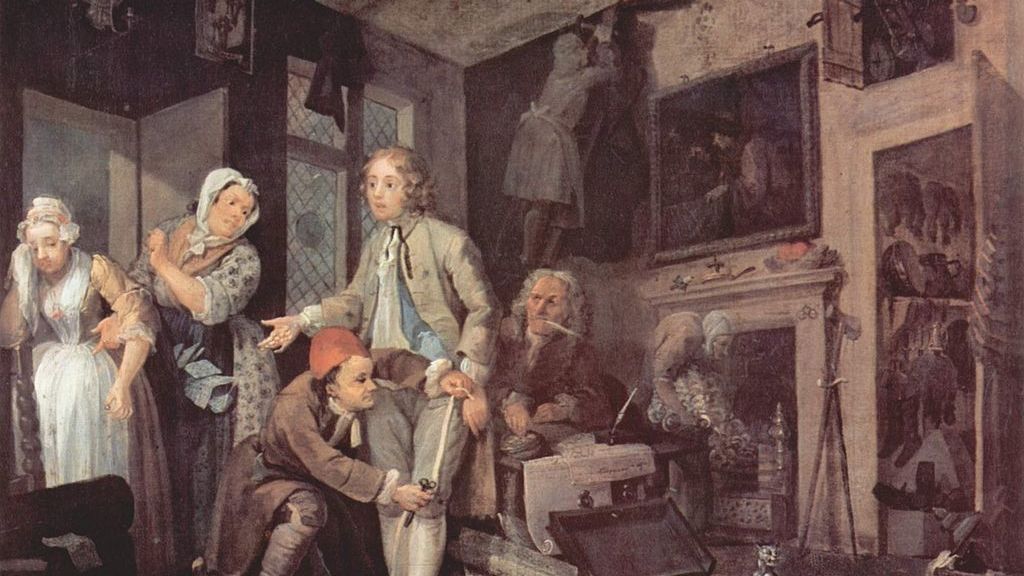 Igor Stravinsky’s 1951 opera, The Rake’s Progress, is a morality play with Faustian undertones. Its English-language libretto, written by W. H. Auden and Chester Kallman, tells the story of Tom Rakewell, a man who abandons his fiancée, Anne Trulove, to pursue a life of gambling and debauchery in the brothels of eighteenth century London. Urged on by Nick Shadow, a shady character who turns out to be the Devil in disguise, Tom ends up in the infamous London insane asylum of Bedlam. In the epilogue which concludes the third act, the characters come together to deliver the moral of the story: “For idle hearts and hands and minds the Devil finds work to do.” The story is based loosely on a series of eight paintings and engravings by the eighteenth century English artist and social critic, William Hogarth (1697-1764). Stravinsky explored similar Faustian subject matter in his 1918 theatrical work, L‘Histoire du soldat (The Soldier’s Tale).

At the end of the first act, as night falls, Anne wonders why she has not heard from Tom. Intuitively, she understands that “to weep is not enough. He needs my help.” She vows to leave her father and travel from the countryside to London. (“Love hears, love knows, Love answers him, across the silent miles and goes”). The aria moves from anxiety to soaring heroism, concluding with the soprano’s high C.

Throughout The Rake’s Progress, intense drama is held at arms length and filtered through a lens of satire and irony. Elements of tragedy and comedy blend together. Stravinsky’s music is filled with allusions to Baroque opera, from melisma and word painting to recitative. As Anne asks the night and guiding moon for help, a mystical duet emerges between the soprano line and the bassoon.

Here is Dawn Upshaw’s 1989 recording with David Zinman and the Orchestra of St. Luke’s:

Featured Image: “The Heir,” the first painting in “The Rake’s Progress,” a series of eight paintings by the eighteenth century English artist, William Hogarth 1697-1764