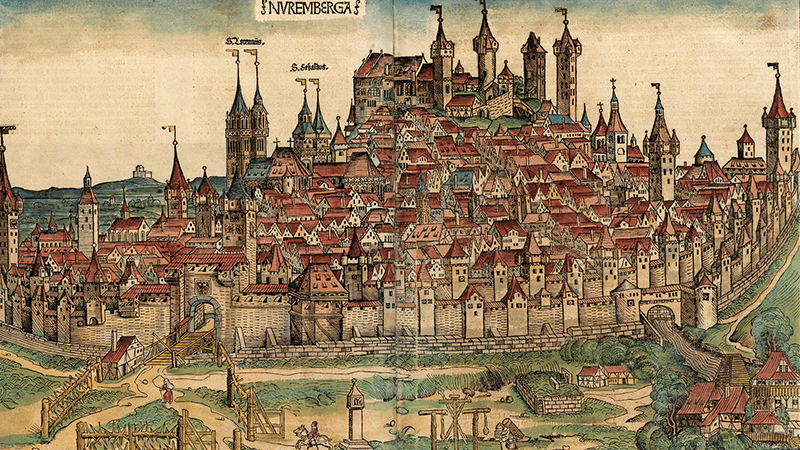 Richard Wagner’s 1868 opera, Die Meistersinger von Nürnberg, is a comic love story, set in sixteenth century Nuremberg. The historical Meistersinger (Master Singers) were a guild of amateur poets and musicians who were primarily middle class master craftsmen of various trades. The guild’s Tabulatur, or law-book, established an intricate system of rules which dictated the structure and performance of songs.

In the opening scene of Wagner’s opera, Walther, a knight who has just arrived in Nuremberg, instantly falls in love with Eva, the daughter of a rich goldsmith and Mastersinger. Eva’s father has promised her hand in marriage to the winner of the annual singing contest. Walther’s initial efforts to join the Mastersingers are thwarted. His song is too free and it violates the rules. Beckmesser, the expected winner of the contest who wants to marry Eva, views Walther with suspicion. At first, Walther and Eva plan to elope. In the final act, the cobbler and expert Mastersinger, Hans Sachs, learns that Walther has had a vivid dream and urges him to use it as the basis for a song. Sachs transcribes the song as Walther sings it and teaches him the rules of the guild along the way. When the two men leave, Beckmesser finds the mostly complete Prize Song and gleefully steals it. To Beckmesser’s surprise, when Sachs finds out, he offers the song to Beckmesser as a gift. The competition takes place in the final scene of the opera. Although he is an excellent singer, technically, Beckmesser mixes up the words and mangles the melody. He is laughed off the stage by the audience. Sachs urges everyone to allow Walther, the outsider, to perform the song properly, after which Eva crowns him with the victor’s garland.

Here is Walther’s Prize Song, performed by Roberto Saccà, and Anna Gabler at the 2013 Salzburg Festival: