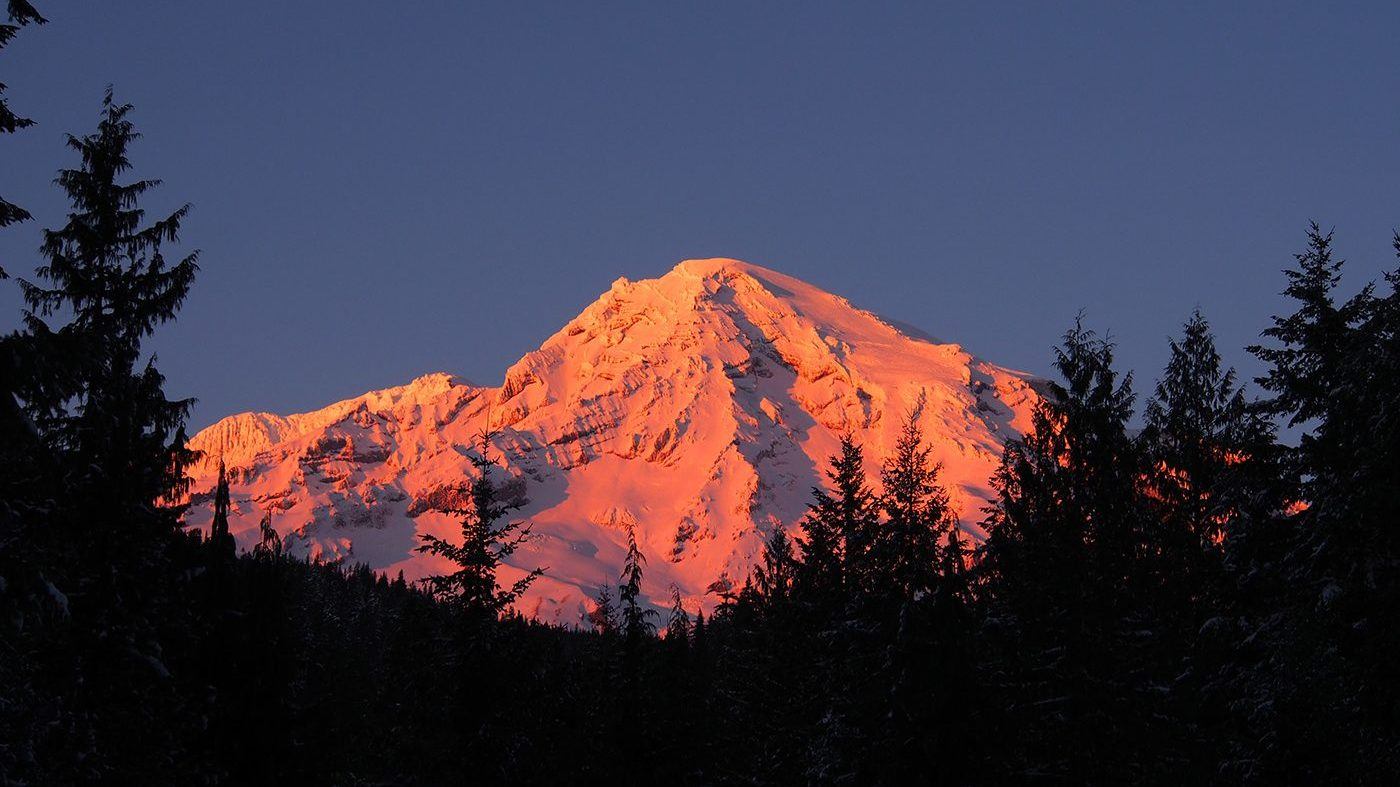 Alan Hovhaness’ Symphony No. 2, Mysterious Mountain, is the music of vast, majestic, metaphorical summits. Unfolding as an arc, its three movements do not take a linear, goal-oriented journey. Instead, they add up to a reverent and awe-inspiring celebration of the eternal.

According to Hovhaness, the Symphony’s title does not refer to a specific mountain, but to “the whole idea of mountains.” He wrote,

Mountains are symbols, like pyramids, of man’s attempt to know God. Mountains are symbolic meeting places between the mundane and spiritual worlds. To some, the Mysterious Mountain may be the phantom peak, unmeasured, thought to be higher than Everest, as seen from great distances by fliers in Tibet. To some, it may be the solitary mountain, the tower of strength over a countryside – Fujiyama, Ararat, Monadnock, Shasta, or Grand Teton.

The Symphony begins with a celestial chorale, set in the endlessly expansive meter of 10/4 time. A quiet walking bass line processes through a dreamy landscape. The harp and celesta add ethereal splashes of color. The plaintive voices of the oboe, English horn, and clarinet float over a rich sonic blanket. The solo trumpet emerges with the same mystic call we hear in Ives’ The Unanswered Question and Copland’s Quiet City. Hovering around the Phrygian mode, the first movement (Andante con moto) inhabits a serene and timeless landscape.

The second movement (Double Fugue: Moderato maestoso; allegro vivo) is a celebration of counterpoint. The flowing initial fugue recalls the choral motets of the Renaissance. The second fugue erupts with the rugged, exuberant energy of the American frontier. This music is drawn from Hovhaness’ First String Quartet, composed in 1936. As vigorous, swirling dances continue in the strings, a return of the first subject in the brass forms the movement’s triumphant climax.

The final movement (Andante espressivo) returns to the contemplative grandeur of the chorale. A haunting ostinato figure begins in the harp, crests, and recedes. It has been described as “a 13-beat Indian raga-like chant.” The Symphony concludes as a majestic, shimmering hymn which evokes the power, strength, and permanence of a mighty peak.

Born in New England in 1911, the Armenian-American Hovhaness was one of the great musical mavericks of the twentieth century. As a composer, he turned away from the prevailing modernism early on to embrace a blend of tonality and modality in which East meets West. The conductor Leopold Stokowski commissioned Mysterious Mountain in 1955 for his debut concert with the Houston Symphony. After the piece was completed, Stokowski urged the composer to give it a descriptive title, as well as an opus number. At the time, Hovhaness’ music had not been catalogued, so Stokowski suggested the random opus number of 132. Mysterious Mountain remained the official title until the early 1970s, when the work was reclassified as a Symphony. In his later years, Hovhaness drew creative inspiration from the mountains of the Pacific Northwest, specifically the Cascade Range, which was visible from his home in Seattle.

In composing Mysterious Mountain, Hovhaness attempted to grasp the fleeting, intangible music of sleep and dreams. In a 1987 interview with Jackie Abramian, the composer said,

I remember hearing celestial ballet in my head as I lay down to rest from writing the work. Later I transcribed what I heard in my sleep. After I wrote it, then heard it again in my sleep, certain versions were wrong. So I corrected it. Now I cannot bear to hear it … it’s just certain parts move me. I go out of the hall whenever the piece is performed.

Mysterious Mountain was first recorded in 1958 by Fritz Reiner and the Chicago Symphony Orchestra. This landmark stereo recording is in the links below. Here is an excellent more recent performance featuring Gerard Schwarz and the All-Star Orchestra:

Featured Image: Mount Rainier in the state of Washington