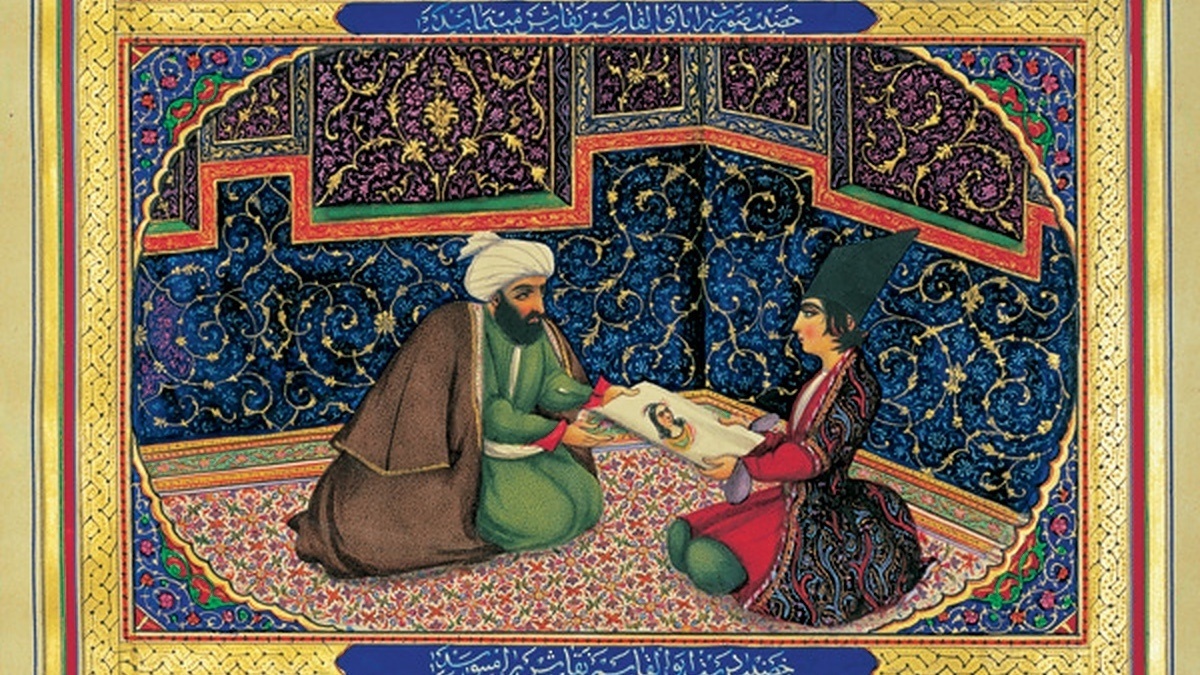 Nikolai Rimsky-Korsakov’s 1888 symphonic suite, Scheherazade, inhabits the realm of the imaginal. As its vivid “characters” spring to life, we encounter the magic and fantasy of a story within a story. Painted with a shimmering color palette, the four-movement suite was conceived by one of music history’s most innovative masters of orchestration. Rimsky-Korsakov touched on the dreamy, exotic nature of this music when he described Scheherazade as “a kaleidoscope of fairy-tale images and designs of Oriental character.” Additionally, he wrote,

The motives thread and spread over all the movements, alternating and intertwining with each other. Appearing as they do each time under different illumination, depicting each time different traits and expressing different moods, the same motives and themes correspond each time to different images, actions and pictures.

The collection of 10th century Persian folk tales, One Thousand and One Nights (or the Arabian Nights), formed the inspiration for Scheherazade. Rimsky-Korsakov drew upon “separate, unconnected episodes” from the stories. In a preface to the score, he set out the following dramatic program:

The Sultan Shahriar, convinced of the duplicity and infidelity of all women, vowed to slay each of his wives after the first night. The Sultana Scheherazade, however, saved her life by the expedient of recounting to the Sultan a succession of tales over a period of one thousand one nights. Overcome by curiosity, the monarch postponed the execution of his wife from day to day, and ended by renouncing his sanguinary resolution altogether.

Scheherazade begins with a stern motif, set in thunderous octaves and derived from the whole-tone scale, which represents the domineering Sultan. A quiet, searching harmonic progression in the winds pays homage to Mendelssohn’s A Midsummer Night’s Dream. Following Mendelssohn’s example, it forms musical “bookends,” first drawing us into the mystical world of the story, then releasing us back to conscious reality in the suite’s final bars. The recurring voice of Scheherazade emerges in the solo violin. Sensuous and seductive, it also expresses an underlying terror. Masterfully, this intimate voice draws us into the story and provides commentary, accompanied by the harp, the instrument of ancient bards.

The first fairy-tale image takes us on a sea-tossed voyage with Sinbad, the mythic sailor. We get a visceral sense of the hypnotic motion of the waves. Through the adventure, the Sultan’s motif is transformed into a majestic and heroic statement. Scheherazade’s captivating story is filled with endless twists and turns. The music is constantly modulating, and the ends of phrases lead continuously to new beginnings. From the solo cello to the horn, new “characters” enter the drama and converse.

The second movement whisks us off to a new adventure. A wistful, gently skipping melody, first heard in the bassoon, introduces us to Kalender, a magician and mystic. The melody, which resembles a Russian folksong, develops through a series of variations. The Sultan’s theme emerges briefly as tiptoeing pizzicati in the low strings. At the same time, Scheherazade’s voice takes the form of a lament in the oboe. Soon, the movement grows into a spirited scherzo. In one passage, a thrilling dialogue unfolds over the hushed intensity of pizzicato strumming. The movement ends as the ultimate exhilarating cliffhanger.

The third movement is a tender love song. Its graceful, lilting sixteenth notes echo Scheherazade’s theme. As the movement develops, it becomes increasingly youthful and vivacious. Then, suddenly, the story halts and Scheherazade, through the solo violin, seems to speak, directly. Following a passionate climax, the final bars drift off as if with a twinkle in the eye.

In the opening of the final movement, the Sultan’s gruffness is replaced with excitement and impatience. He seems to be saying, “but how does the story end?!” We are transported to a lively festival with a boisterous dance, accompanied by the sound of the tambourine and cymbals. Motifs from the previous movements return, and the excitement builds. Suddenly, we find ourselves back on Sinbad’s ship, this time tossed by gigantic, tempestuous waves. The story ends with a violent shipwreck. Scheherazade sings a gentle lullaby and the now accepting Sultan drifts off into blissful sleep.

I. The Sea and Sinbad’s Ship:

II. The Tale of the Kalender Prince:

IV. The Festival at Baghdad – The Sea – Shipwreck on a Rock Surmounted by a Bronze Warrior – Conclusion:

3 thoughts on “Rimsky-Korsakov’s “Scheherazade”: Entering the Realm of the Imaginal”