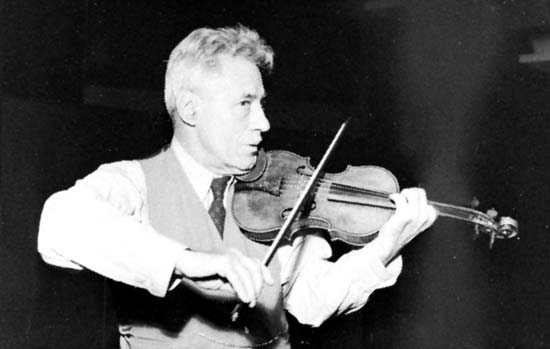 Fritz Kreisler (1875-1962 ) is remembered as one of the twentieth century’s most important violinists. Born in Vienna, he fled to France during the Second World War and later became a naturalized American citizen. Even through scratchy old recordings we can get a sense of his sweet, sensuous tone, musical warmth and elegant phrasing. His intense, expressive vibrato, used on almost every note, was revolutionary.

Kreisler’s contribution as a composer for the violin is also significant. He performed these pieces as encores at the end of concerts. Some of his music, written in the style of past composers and attributed to them as newly discovered works, were part of an elaborate hoax. (An example is Sicilienne & Rigaudon). Other gems such as Liebesleid (Love’s Sorrow) and Liebesfreud (Love’s Joy) represent the last vestiges of pre-war Vienna, a world he watched disappear.

Here are a few of his recordings. Notice that the style of the day included expressive portamento (connecting certain notes with slides) reminiscent of a singer:

This clip features two performances of Liebesleid. The first was recorded in Berlin on February 14, 1930. The second, featuring orchestra accompaniment, was recorded at Philadelphia’s Academy of Music in 1942.

This recording of Liebesfreud comes from 1938. In this clip and one which follows, notice Kreisler’s sparkling spiccato (bouncing bows) and perfect sense of rhythmic timing:

Finally, here is Caprice Viennois from a 1942 recording: