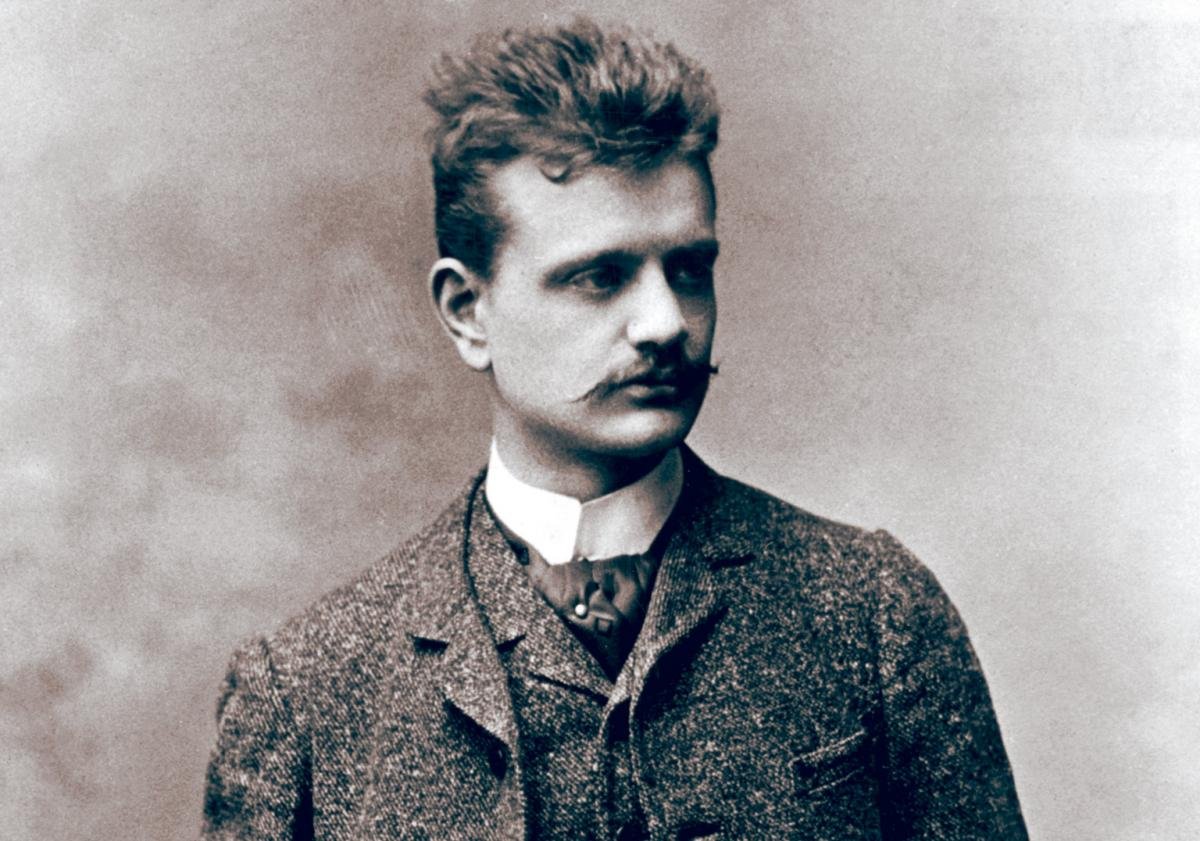 Listen carefully to the way Jean Sibelius’ Fifth Symphony begins. An expansive opening motive, quiet, awe-inspiring and mystical, sets the entire mighty symphony in motion. The Finnish composer, Jean Sibelius (1865-1957) famously insisted on periods of prolonged silence when he was working. Appropriately, the opening of the Fifth almost seems to emerge from the bleak, desolate stillness of a Scandinavian forest. The tympani’s roll from B-flat to E-flat, taken by itself, would suggest a simple dominant to tonic in the symphony’s home key of E-flat major, but the music never quite arrives at this convincing resolution…There’s more left to be said.

You may notice this pattern repeating as the first movement unfolds. Every point of arrival opens up a new door of uncertainty, building tension and plunging us into increasingly frightening territory. At one point the tonal center evaporates completely and the solo bassoon wanders, lost in a sudden, ghostly sea of atonality (6:43). Sibelius’ Fifth breaks down traditional Sonata form, leaving development which is more circular, a phenomenon which musicologist James Hepokoski describes as “rotational form.” Could this altered sense of time be vaguely influenced by Nordic seasonal cycles, where a low midnight sun in the summer transitions to dark, gloomy winters?

Following its completion in 1915, Sibelius revised the symphony. (“Never write an unnecessary note,” he said. “Every note must live.”) The revision included the bizarre and unprecedented innovation of splicing together the end of the first movement and the beginning of the second, creating an uninterrupted symphonic arc. Alex Ross describes this moment (around 9:25 in the clip below) as “a cinematic ‘dissolve’ from one movement to another.” What follows is a thrilling feeling of gradual acceleration and crescendo, as if the brakes have been suddenly cut loose.

Listening to this symphony, I’m always struck by a visceral sense of spin. This sensation is first apparent right after the expansive opening as the motive takes shape before our ears (0:14), as if composing itself and searching for a way forward. In this passage you’ll hear the motive passed between groups of woodwind instruments. Do the voices of the instruments suggest distinct personas?

Listen to the first movement and see if you agree with me about the sense of spin…motion which never arrives anywhere definitive until the end of the movement. This is Leif Segerstam conducting the Helsinki Philharmonic Orchestra:

At first, you may hear pastoral sounds of the nineteenth century in the second movement-maybe even a nod to Beethoven. But there’s something more ominous lurking beneath the surface, evoking the twentieth century and a world on the brink of war. Consider this movement’s sense of flow and development. Pay attention to the pizzicatos and the contrasting, static, sustained pitches in the woodwinds, with all those strange “wrong” notes hanging over. Notice the way empty musical “space” is filled with increasing complexity and embellishment as the movement unfolds.

Rising out of the trembling iciness of the final movement (music which occasionally brings to mind John Adams’ 1978 minimalist masterpiece, Shaker Loops) is the distinctive “Swan Theme” (25:14). In the recording above, listen to the way Segerstam brings out the deep, organ-like bass notes and notice the hypnotic way they fit together with the horns. The symphony’s transcendent, heroic climax comes with the sudden turn to C major (26:07). It’s a brief but significant moment, which sticks in our minds long after it has passed.

The iconic “Swan Theme” plays an important role in the conclusion of the symphony; but in these final bars, it seems to be surrounded by ambiguity. Before we get there, we experience a hint of the opening of the first movement (30:22), as if to remind us where we’ve been. How do you interpret the end of the piece with its strange silences? Is it even important to try to sum it up in words, or to assign emotional labels to something which transcends description? If you feel inspired, share your thoughts in the thread below.

Come back on Friday to hear echoes of Sibelius’ Fifth Symphony in music written in 1990 by contemporary Danish composer Poul Ruders.

I’ve noticed that this piece can sound quite different, depending on the interpretation. Here are a few recordings. Let me know your favorites: