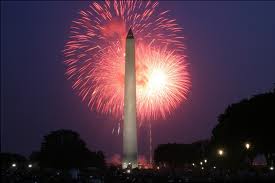 In celebration of Independence Day, take a moment and listen to Noah Bendix-Balgley perform solo violin versions of God Bless America and The Star Spangled Banner at a Pittsburgh Pirates game (below). Bendix-Balgley is the 29-year-old concertmaster of the Pittsburgh Symphony who recently accepted the same position with the Berlin Philharmonic. He will stay in Pittsburgh for at least part of this coming season. Hear a few more clips in this previous post.

If you’re in the mood for more patriotic solo violin music, here is Ruggiero Ricci’s 1995 recording of Henri Vieuxtemps’ Souvenir d’Amérique, Variations burlesques sur “Yankee Doodle” Op.17 . Vieuxtemps (1820-1881), one of the nineteenth century’s most influential violinists, wrote Yankee Doodle in New Orleans during his first American concert tour. Apparently, American audiences in the 1840s had a hard time listening to long European concert music, but when Vieuxtemps played Yankee Doodle he was met with cheers.

For more music, revisit last year’s Sousa post and have a happy Fourth!