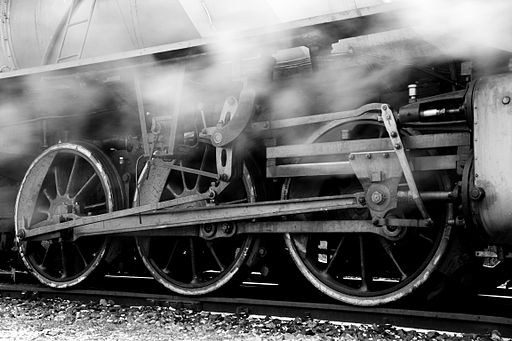 One of my fondest early childhood memories was visiting the Arcade and Attica Railroad for a summer afternoon train ride. Nestled in the rolling Western New York countryside east of Buffalo, it’s one of a handful of places where visitors can get up close and personal with a steam locomotive. Beyond the soot and flying cinders, the sound of a steam engine may be the most memorable aspect of the experience. It huffs, puffs and breaths as if it’s alive. It laboriously chugs up a hill with a persistent rhythm. If you’ve never been close to a steam engine these clips from Arcade, Stockton, California and the Railroad Museum in Strasburg, Pennsylvania will give you some idea.

Swiss composer Arthur Honegger (1892-1955) found musical inspiration in the steam locomotive. Honegger wrote Pacific 231 partly as a musical experiment. His goal was to create music which gave the impression of increasing rhythmic momentum and a simultaneous slowing of tempo. Here is how Honegger described the music:

I have always loved locomotives passionately. For me they are living beings whom I love as others love women or horses. What I sought to achieve in Pacific 231 was not the imitation of the noises of the locomotive but rather the translation of a visual impression and of the physical enjoyment through a musical construction. It opens with an objective observation, the calm respiration of the machine at rest, the effort of the start, a gradual increase in speed, ultimately attaining the lyrical stage, the pathos of a train 300 tons in weight launched in the dark of night at 120 kilometers an hour. For my subject I selected a locomotive of the Pacific type, bearing the number 231.

Listen to Pacific 231 and enjoy the sense of motion and raw energy. Can you feel the pressure building in the opening? Can you hear the train gaining speed, working to get up a hill, slowing at the end of the trip and ultimately finding a final rest?

Music is all around us-even in our machines. In the eighteenth century composers were influenced by brooks, pastures and birdsongs. By the industrial twentieth century the world had become louder and more dissonant. What kind of music is being produced by our increasingly wired, information saturated twenty first century world?

From Chicago to New York

Growing up during World War II, Steve Reich (b. 1936) frequently traveled by train between New York and Los Angeles to visit his separated parents. A Jewish American, Reich later realized that European Jews were riding trains to concentration camps during the same years. This realization was the inspiration for Different Trains, written in 1988 for string quartet and tape. Reich constructed the piece around fragments of recorded voices. For the first movement, Reich recorded his former governess and a long retired railway porter reminiscing about the trains of the 1930’s and 40’s. In the second and third movements we hear the voices of Holocaust survivors. Here is a clip of Reich talking about Different Trains.

Listen to the first movement, America-Before the War, performed by the Kronos Quartet. How does the music unfold? Is the motion fast or slow? Can you sense the recorded speech developing in any way? Do you hear anything “musical” or expressive in the voices?

When I listen to this music I notice that I have a heightened sense of awareness of the moment. I find myself  becoming one with the sound. Repeated musical phrases take on a unique power. While Different Trains has a fairly fast pulse, it evolves slowly. Did the music change your perception of time? Did we just turn up the volume on something that has always been there and will continue into infinity? You probably noticed a gradual additive process in the recorded voices. As each fragment is repeated and enlarged, more musical “space” is taken up. The instruments imitate the pitch inflection of each spoken fragment.

Something was in the air in the 1960’s which led Steve Reich, Philip Glass and others to begin writing repetitive, circular music. This new direction in music, known as Minimalism, was partly a reaction to the complexity of atonal or 12-tone music. A similar movement occurred in the art world slightly earlier. Think about the endlessly repeating chorus of your favorite Pop song-anything from Disco and Techno to Phil Collins or Joe Jackson. How are these songs similar in flow to the Minimalism of Steve Reich?

Zoo Station is the opening track of U2’s 1991 album, Achtung Baby. The song was inspired by Berlin’s Zoologischer Garten railway station and Europe at a crossroads in the early 1990’s following the fall of the Iron Curtain. After a night of Allied bombing damaged Berlin’s zoo during World War II, animals were found wandering freely in the streets amid the rubble. Bono viewed this story as a metaphor for Eastern Europe’s liberation after the collapse of the Soviet Union.

With this album U2 went in a new direction, using recording techniques such as distortion in the drums and vocals. Interestingly, you may be reminded of the additive process of Steve Reich (the opening of the song and around 2:44):