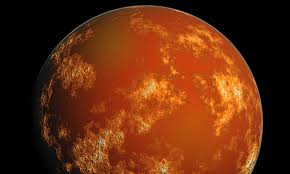 This evening you may want to grab your telescope, head outside, and look into the southeastern night sky. Mars is making its closest approach in six years today, coming within 57.4 million miles of earth. Last month, NASA’s Curiosity Rover captured pictures of the earth as a bright speck in the Martian sky.

From Ray Bradbury’s 1950 collection of short stories, The Martian Chronicles, to current discoveries of possible water on Mars, the red planet has long been a source of fascination. In ancient Roman mythology, Mars was the god of war. Astrological associations with Mars were the inspiration for the first movement of The Planets, Op. 32, a suite by English composer, Gustav Holst (1874-1935). Here is Mars, the Bringer of War performed by James Levine and the Chicago Symphony. Pay attention to the flow and rhythmic feel. Can you tell how many beats are in each measure? The answer may surprise you.

Holst wrote this ominous music in 1914 at the onset of the First World War. It drives forward in an unrelenting 5/4 time (1-2-3-4-Five). It’s that last beat which makes the music feel slightly automated and unnatural, reflecting the blind insanity of a society marching towards self destruction. The opening of the piece calls for col legno, a sound effect in which the wood of the bow is hit into the strings. At 2:13 notice Holst’s use of the euphonium horn (tenor tuba). The trumpet fanfares which follow suggest the age-old sounds of battle.

Mars may have reminded you of the Imperial March from John Williams’ film score for Star Wars. Interestingly, both begin in the key of G minor, which has been associated with unease, conflict and tragedy going back to Mozart. The Planets closes with the ethereal Neptune the Mystic . Compare Neptune to this excerpt from Williams’ 2001 film score for A.I. and consider all the other atmospheric Hollywood scores which draw upon these sounds.

Science is no more than an investigation of a miracle we can never explain, and art is an interpretation of that miracle.

Do you ever wonder if–well, if there are people living on the third planet?’ ‘The third planet is incapable of supporting life,’ stated the husband patiently. ‘Our scientists have said there’s far too much oxygen in their atmosphere.