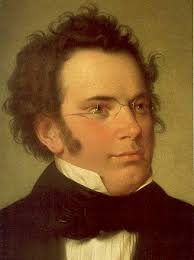 In a previous post, I suggested that many of the greatest composers experienced a mysterious, heightened sense of musical insight in their final years, leading to some of the most profound and visionary music. Franz Schubert (1797-1828), who died at the tragically young age of 31, tapped into this sense of revelation at the end of his life. Following a series of charmingly tuneful classical symphonies, Schubert’s Symphony No. 9 in C major (“The Great”) rose to the heroic, Romantic heights of Beethoven’s symphonies, although it differed from Beethoven in temperament and was rooted in melody rather than motive.

Equally profound is Schubert’s String Quintet in C major, D. 956, completed just two months before his death. In this piece, the addition of a second cello to the traditional string quartet brings a new dimension to the sound, creating an almost symphonic quality. This contrasts Mozart’s addition of a second viola in his quintets.

One interesting aspect of Schubert’s writing is his ability to draw upon the emotional significance of keys and their relationships. Listen for sudden modulations and harmonic surprises, like the turn to E-flat major (1:56). Consider how this new key, a third away, feels completely different.

The second movement features a contrast between the ethereal, almost time altering opening in E major and the turbulent second theme in a distant F minor. Listen to the way Schubert sums up this dichotomy at the end of the movement (34:00-34:37).

Pay attention to the way the the inner voices and cello pizzicati shape the way the music flows.

Here is a 1994 Naxos recording by the Villa Musica Ensemble:

If you feel inspired, share your thoughts about the music, along with favorite recordings, in the thread below.