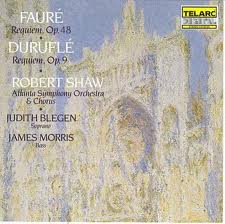 Gabriel Fauré’s Requiem in D minor, Op. 48, the choral-orchestral setting of the Roman Catholic Mass for the Dead, offers a uniquely serene and tranquil view of death. Influenced by chant, it floats on a peaceful and sometimes modal sea, The traditional Sequence section, the hellfire of the Day of Wrath, is omitted, while the Pie Jesu and In paradisum are added.

Written between 1887 and 1890, the Requiem was not motivated by personal tragedy or sombre thoughts of mortality. Fauré said, “My Requiem wasn’t written for anything–for pleasure, if I may call it that!” He added the following description:

It has been said that my Requiem does not express the fear of death and someone has called it a lullaby of death. But it is thus that I see death: as a happy deliverance, an aspiration towards happiness above, rather than as a painful experience. The music of Gounod has been criticized for its overinclination towards human tenderness. But his nature predisposed him to feel this way: religious emotion took this form inside him. Is it not necessary to accept the artist’s nature? As to my Requiem, perhaps I have also instinctively sought to escape from what is thought right and proper, after all the years of accompanying burial services on the organ! I know it all by heart. I wanted to write something different.

The Requiem emerges out of a stern D minor chord. Two contrasting lines (the dark strings and shimmering vocal lines) take tentative steps in opposite directions. We can almost feel the power of the text’s divine light (“et lux perpetual“) with each harmonic change. The passing tone in the bass at 1:11 suggests a sudden moment of terror before resolving to safety. Between 1:35 and 2:19 we hold our breath in anticipation and then arrive at an unexpected, but sublime peace.

At moments, Fauré’s harmonies drift in directions which seem to anticipate the full blown impressionism of Debussy and Ravel (listen to the string lines between 9:00 and 9:28). At 11:00, notice that the “Te / decet / hymnus” motive (first heard at 3:34) returns. We hear this motive again in the Sanctus’s violin solo. The motive is dominated by the interval of a perfect fourth, which also becomes the opening interval of the Pie Jesu.

The serenely transcendent final movement, In Paradisum, drifts away into a childlike simplicity, innocence and joy.

Here is Robert Shaw’s outstanding recording with the Atlanta Symphony Orchestra and Chorus:

3 thoughts on “The Fauré Requiem, A Lullaby of Death”