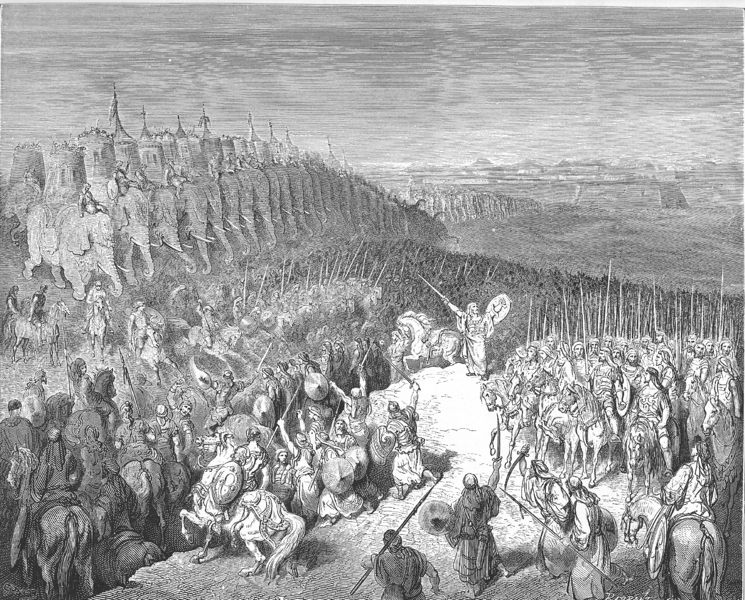 George Frideric Handel’s 1746 oratorio, Judas Maccabaeus tells the story of Hanukkah. The oratorio, set to a libretto by Thomas Morell, is a three act dramatization of the Maccabean Revolt (167-160 BC), in which a Jewish army rose up against the Seleucid Empire (present day Syria). The revolt, which ultimately led to the rededication of the Temple in Jerusalem, was sparked by the actions of a lone Jewish priest, Mattathias. In defiance of the mandate to worship Zeus, Mattathias killed a fellow Jew who was about to offer pagan sacrifice and tore down the pagan alter.

It’s a drama which seems ripe for Handel’s triumphant music. But for all of Judas Maccabaeus’ religious overtones, it’s likely that Handel actually conceived the work as a clever piece of secular political propaganda. Its mythic heroism coincided with Prince William, Duke of Cumberland’s victory at the Battle of Culloden, a conflict which marked the end of the Jacobite rising of 1745.

Judas Maccabaeus moves from mournful despair (the unrelenting quiet intensity of the Chorus For Sion lamentation make at 17:46) to a stirring rallying cry (Arm, arm, ye brave 29:52), and ultimately to triumphant exultation. Listen to the way Handel’s counterpoint becomes increasingly complex and euphoric in the Chorus, Hear us, O Lord (55:56).

Shinichi Suzuki’s transcription of the theme of the Chorus, See, the conqu’ring hero comes, is included in Book 2 of the Suzuki Violin Repertoire. Chorus from Judas Maccabaeus helps students develop long, sustained bows and a feeling of relaxed, springy connection to the string. It’s also a great piece for bow division and the encouragement of the push of the elbow and upper arm, which allows the bow to reach the frog. For full bows, students should visualize the bow’s motion as an arch (following the dip of the bow stick), not as a straight line.

Here is Handel’s original version, performed by Sir Charles Mackerras and the English Chamber Orchestra. The jubilant chorus occurs towards the end of Judas Maccabaeus.