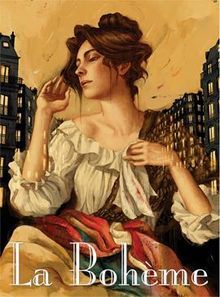 Opera, with its rich blend of music, drama and staging, is one of the most complex art forms on the planet. If you’ve ever been curious about the myriad of subtle details that singers encounter as they bring an opera scene to life, watch the clip below from a young artists’ workshop at London’s Royal Opera House. Conductor Sir Mark Elder coaches soprano Susana Gaspar and tenor Michel de Souza in Marcello and Mimì’s duet from Act 3 of Puccini’s lushly romantic La Bohème. Along the way, we gain insight into Puccini’s music.

La Bohème doesn’t open with an overture. Instead, a sudden, exhilarating burst of energy launches us into the first scene set in Marcello and Rodolfo’s modest and chilly flat. As Elder mentions, this music originated in Puccini’s student composition (and Milan Conservatory thesis), Capriccio sinfonico. The first Act culminates with the intimate duet, O soave fanciulla, sung here by Teresa Stratas and José Carreras in a 1982 Met production.

Watching great singers up close is a reminder that opera singing, by nature, is an athletic endeavor. A tremendous physical effort is made to look easy. In this respect, there’s a side of opera that is pure sport. But, in this masterclass, Mark Elder takes us beyond the mechanics and challenges us to hear the small details that make the drama of La Bohème come alive: