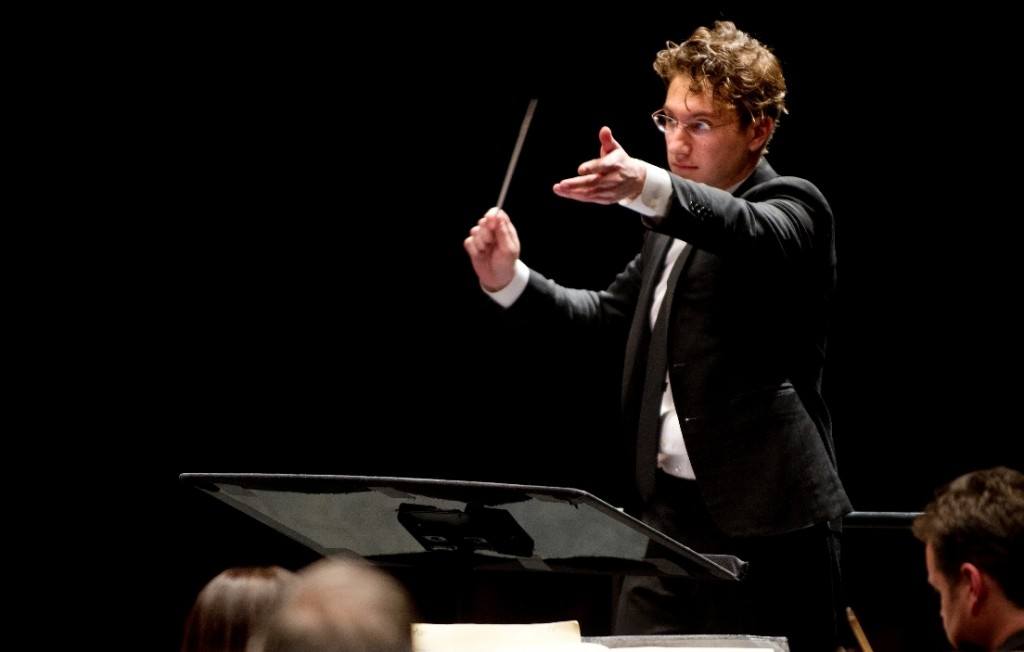 In September, the Louisville Orchestra released All In, its first recording in nearly 30 years. The album, which reached number one on Billboard’s Traditional Classical Chart, is filled with youthful energy and a thrilling disregard for boundaries. It opens with the music of the Louisville Orchestra’s dynamic, 30-year-old Music Director Teddy Abrams, a conductor, composer, clarinetist, pianist, and force of nature. Unified Field unfolds in four continuous movements and runs the gamut from cinematic impressionist colors, to the blues, to a “crazed” bluegrass-inspired finale. The work, whose title references the physics theory, was the result of a collaboration with Louisville Ballet. In the program notes Abrams writes,

My own music reflects my favorite musical experiences and memories, ranging from an obsession with ‘classical’ contrapuntal technique to the unmatched energy of playing a rock show and the joy of jamming with great Bluegrass artists. Usually these worlds do not find much common ground, but ‘Unified Field’ is an attempt to join everything I love into a single expression across multiple genres.

The interior of the album features vocalist, songwriter, actress and author, Storm Large, who has performed extensively with Teddy Abrams and the Louisville Orchestra. She performs three songs: Cole Porter’s It’s Alright With Me, Abrams’ The Long Goodbye, and her own song, A Woman’s Heart. The disk concludes with Abrams’ virtuosic performance of Aaron Copland’s Clarinet Concerto, written in 1948 for Benny Goodman. This final piece, which blends elements of jazz with witty neoclassicism is, itself, genre-defying, creating a fitting close for the album.

The opening movement of Unified Field shimmers with swirling colors reminiscent of Ravel’s ballet score for Daphnis and Chloe:

My friend and former colleague Robert Simonds serves as the Louisville Orchestra’s Principal Second Violin. Recently, I asked him about this new recording and the atmosphere in Louisville. This excerpt from his response highlights the importance of an orchestra’s passionate service and engagement with the community:

Teddy has absolutely transformed the orchestra and truly deserves the title: Music Director. He’s not just the director of classical music during the weeks he’s here. Teddy is interested in the whole institution and maybe more importantly, its place in the community’s fabric. His openness to every corner of Louisville is inspiring. His fluency in so many styles is incredible. He’s the music director I’ve been waiting my whole career to play for because he’s the first leader that has made me believe that an orchestra can be important to is city.

We are really proud of the record. His piece is maybe the most challenging orchestral work I’ve ever performed, never mind recorded. One of our first violinists, Scott Staidle, has a saying about the older LO recordings: “We used to record an hour’s worth of music in 45 minutes.” Making this record made me truly understand what he meant. But that sums up Teddy’s operating principle. We go at a super-charged pace and when you’re in it, it can be disorienting. When the dust settles, we realize that we accomplished something great.

Rob reminded me that Copland wrote his Orchestral Variations for the Louisville Orchestra in the late 1950s. Here is Copland’s Clarinet Concerto from the album: