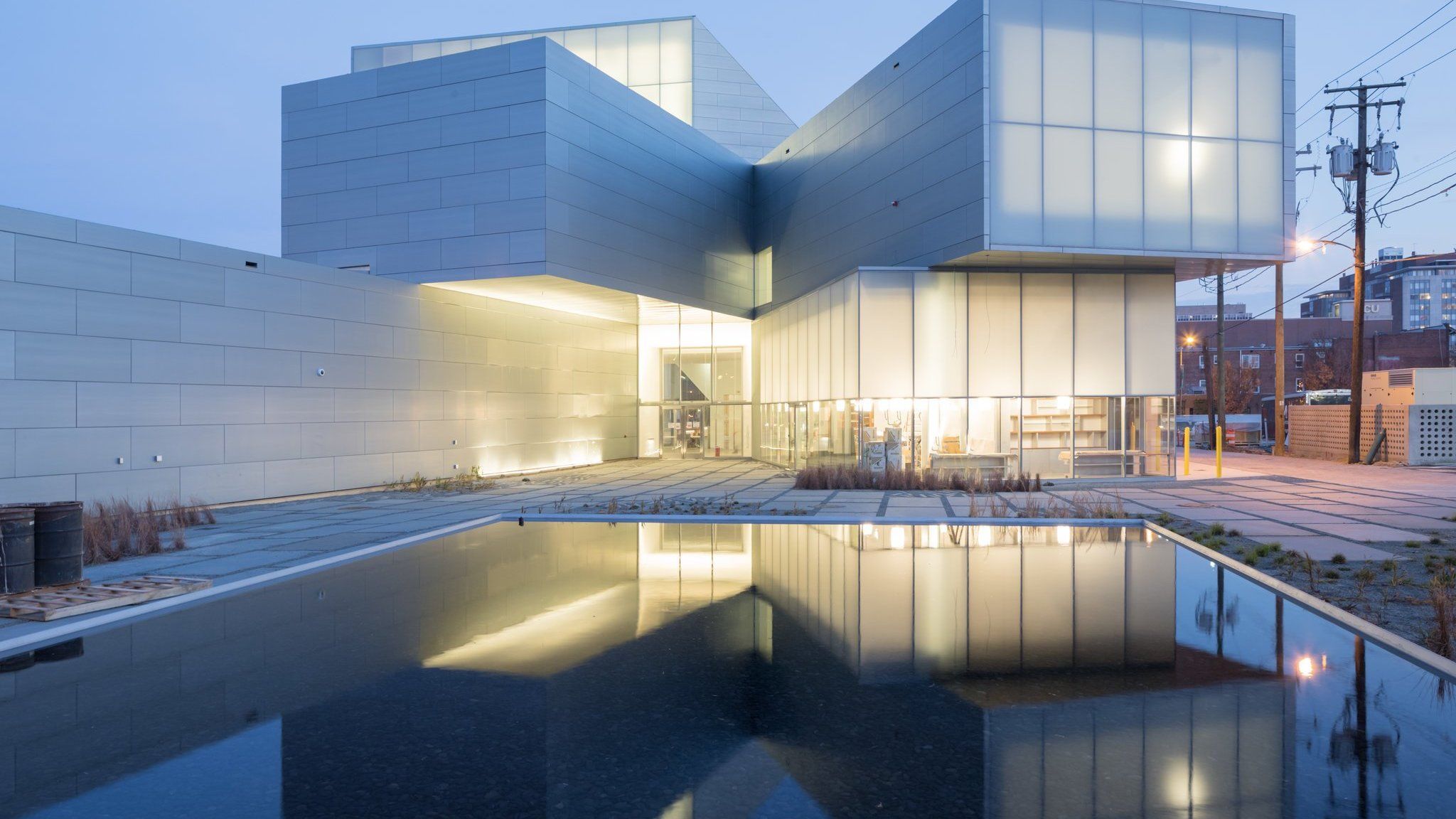 On Saturday, I attended the opening of Virginia Commonwealth University’s new Institute for Contemporary Art (pictured above). Situated at one of Richmond’s most prominent intersections, the collection of galleries will host “an ever-changing slate of exhibitions, performances, films, and special programs that translate our world into every medium.” The sculptural design by American architect Steven Holl has become an instant landmark. At night, the translucent structure emits the warm glow of a giant lantern. Inside, the ever-changing play of shimmering sunlight streaming through occasional windows and skylights contributes to the building’s drama and provides a stunning setting for the art. The building is filled with surprises. Narrow passages open out onto sudden, unexpected views, creating a sense of “procession.” Even with throngs of visitors, the building retained a serene dignity.

Steven Holl has discussed the influence of music on his architecture. His Stretto House in Dallas was inspired by Bartok’s Music for Strings, Percussion and Celeste, a piece which for Holl “has a materiality in instrumentation which the architecture approaches in light and space.” At Columbia University, Holl has been examining the links between music and architecture. In The Architectonics of Music, Steven Holl writes,

Music, like architecture, is an immersive experience; it surrounds you. One can turn away from a painting or a work of sculpture, while music and architecture engulf the body in space. Research into music and architecture moves forward at a time when architectural pedagogy is diffused, worn out. Schools of architecture today seem directionless. Postmodernism and deconstruction have passed into history, while the euphoria of technique in “parametrics” promises a lack of idea and spirit, and neglect of the importance of scale, material, detail, proportion, and light. Yet we continue to see potential in future architecture as open to experiment and as connected to spirit. While we ask, “what is architecture?” we also ask, “what is music?”

Considering the link between music and architecture got me thinking about the works of the twentieth century composer, Iannis Xenakis (1922-2001). Xenakis, who fled political persecution in Greece in the late 1940s to settle in Paris, studied with Olivier Messiaen. He enjoyed a parallel career as an architect and engineer, working in Le Corbusier’s studio. In his book, The Rest is Noise: Listening to the Twentieth Century, Alex Ross writes that Xenakis “began thinking about how instrumental sound could be ‘built’ as a structure is built, without breaks or seams in the construction.”

Le Corbusier’s mathematical concepts influenced Xenakis’ Metastaseis, completed in 1954. (The title translates as “beyond immobilities”). Although the score was completed in traditional musical notation, Xenakis worked out the initial sketch in a graphic notation which set pitch on one axis and time on another. Metastaseis influenced the design of Xenakis’ Philips Pavilion, constructed for the 1958 World’s Fair in Brussels.

In the opening of Metastaseis, a unison G in the strings splinters into 46 independently moving glissandi. The piece unfolds in awesome waves of sound- something akin to the buzz of insects or the cacophony of gunfire on a battlefield. As the ghostly, anguished voices of Metastaseis come alive, you’ll hear that this music transcends pure mathematical structure.