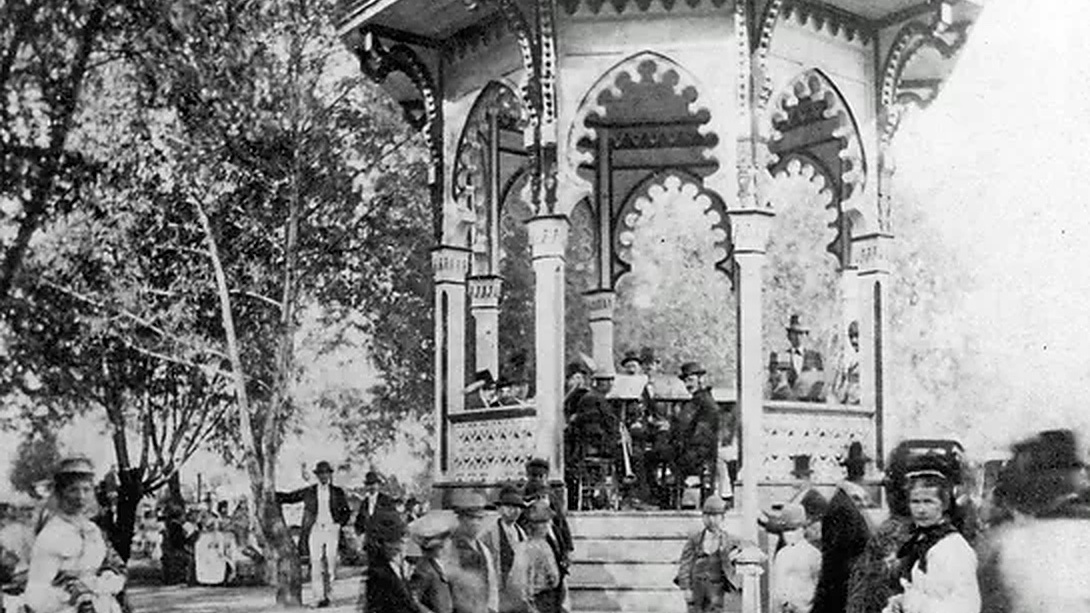 Gazebo Dances, by the American composer John Corigliano (b. 1938), inhabits a dreamy, nostalgic world of summer afternoon picnics and concerts on the village green.

Composed in 1972, the piece was scored originally for piano four hands. Each of its four brief movements was dedicated to one of the composer’s “pianist friends.” In his program notes, Corigliano writes,

I later arranged the suite for orchestra and for concert band, and it is from the latter version that the title is drawn. The title Gazebo Dances was suggested by the pavilions often seen on village greens in towns throughout the countryside, where public band concerts were given on summer evenings. The delights of that sort of entertainment are portrayed in this set of dances, which begins with a Rossini-like overture, followed by a rather peg-legged waltz, a long-lined adagio and a bouncy tarantella.

Gazebo Dances is youthful, fun-loving, and delightfully unpretentious. Corigliano intended it to be casual “music to be played with friends at home” rather than concert music. The exuberant, frolicking Overture serves as a rambunctious “call to order.” The waltz, continuously pulled off balance by an unpredictably wandering bass line, is filled with the quirky humor we hear throughout the music of Prokofiev. The quietly searching Adagio floats into an intimate dreamscape. Gazebo Dances concludes with a zany tarantella, a rapid Italian folk dance from the fifteenth century.

Here is the piece in its original version for two pianos, performed by Natalia Lavrova and Vassily Primakov:

Corigliano: Symphony No. 1, “Of Rage and Remembrance”: Tarantella

The Tarantella which closes Gazebo Dances was dedicated to Jack Romann, director of the concert and artist department of the Baldwin Piano Company. Tragically, Romann passed away in 1987 after suffering with AIDs-related dementia. John Corigliano’s Symphony No. 1, completed in 1989, was a musical memorial to victims of the disease. In the Symphony’s second movement, the innocent Tarantella of Gazebo Dances takes on dark, hallucinatory tones: