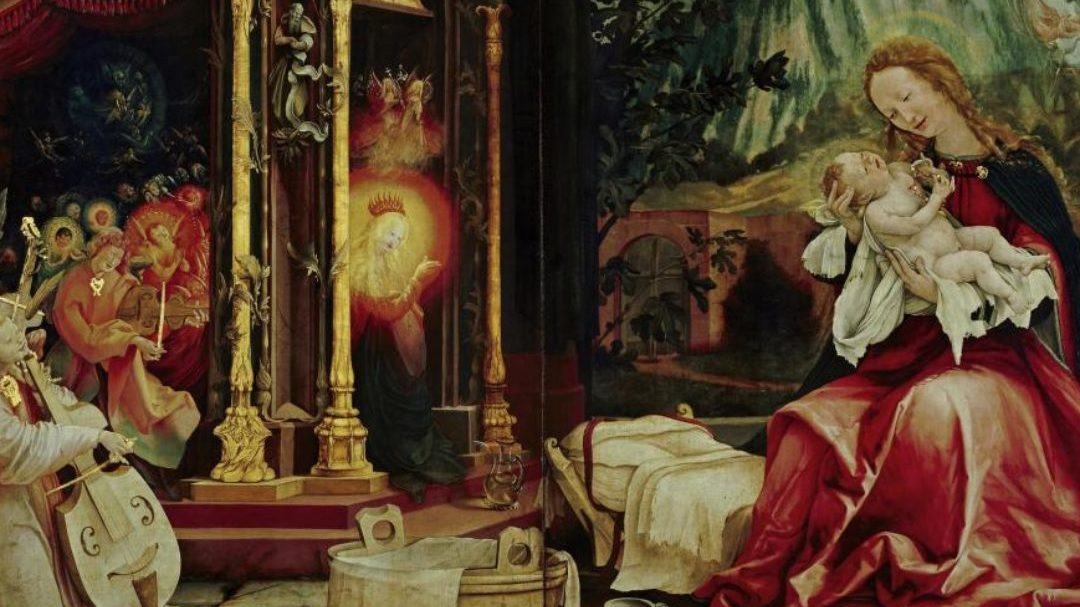 In 1934, as the Nazis rose to power in his native Germany, Paul Hindemith worked concurrently on an opera and a symphony, both of which emerged from the same musical source.

The opera, Mathis der Maler (“Mathias the Painter”), is a fictional account of the life of the German Renaissance painter, Mathias Grunewald (c. 1475-1528). It is set during Central Europe’s Peasants’ War of 1524, a brief, but tumultuous, rebellion which was inspired by the ideals of the Protestant Reformation. Mathias abandons his art to join the peasants in their rebellion, only to realize later that he has betrayed his true calling. In the sixth scene, Mathias assumes the dreamlike form of St. Anthony and is seduced by wealth, power, and mastery over science. Ultimately, he is granted redemption by St. Paul, who says,

It was ungrateful and unfaithful of you
To throw away God-given talents. When you joined the People,
You betrayed them and renounced your calling.
Return to both. Everything you create should
Be an offering to the Lord, so that in every work,
His will may be worked.
…
And if they kill you, is it so bad if the price of creation
Is one’s life? What you attempt
And what you suffer are what give your work
The blessing of immortality.
Go forth and create.

A year earlier, Hindemith had rejected the project when it was suggested by his publisher. With the rise of the Third Reich and its repressive artistic climate, perhaps the subject took on new meaning for the dissident composer, who also crafted the libretto. Before it could be performed, the opera was banned by the authorities. Hindemith was denounced publicly by Joseph Goebbels before the Reich Chamber of Culture.

Meanwhile, the conductor, Wilhelm Furtwängler, had asked Hindemith to write a piece for an upcoming Berlin Philharmonic concert tour. The result was the three movement Symphony: Mathis der Maler, written while the opera was in its preliminary stages. The symphonic movements were incorporated into the opera as orchestral interludes. Each was inspired by a tableau painted by Grünewald for the Isenheim Altarpiece (now on display at the Unterlinden Museum in France). Furtwängler premiered the Symphony just before the ban took effect, but faced severe criticism from the party for supporting “degenerate” art.

Goebbels denounced Hindemith as an “atonal noisemaker.” In reality, Hindemith’s approach to composition and music theory emphasized the pure, fundamental tones of the harmonic series. Through numerous solo works, Hindemith explored the subtle capabilities of each instrument. The result is a sonic warmth and richness.

In the opening bars of the first movement (“Angel Concert”), we are enveloped in a shimmering, celestial G major triad. This music, which became the opera’s prelude, corresponds with the central painting of the Altarpiece, which depicts a choir of Angels serenading the newborn Jesus in Mary’s arms. The German Christmas carol, Es sungen drei Engel (“Three Angels Were Singing”), emerges as a majestic chorale, introduced by the trombones. This music is filled with the kind of numerical symbolism which Bach used frequently. There are three main themes. The first theme’s “three angels” are represented by three trombones. The movement closes with three celebratory chords.

The painting which inspired the second movement (“Entombment”) depicts the crucified Christ in the tomb. Light meets shadow as the bright flute gently pierces the veiled strings. Soon, we hear the pastoral voice of the oboe. Gradually, this halting procession builds to a triumphant climax before fading into serene contemplation.

The final movement evokes two of the Isenheim paintings. The first depicts St. Anthony surrounded by grotesque demons. Printed in the score are the words, “Where were you, good Jesus, where were you? Why have you not come to heal my wounds?” The second painting shows St. Anthony meeting St. Paul the Hermit. Quiet, solemn mystery is followed by joy and celebration, all within the frame of pristine, classical counterpoint. The Symphony ends with a quote from the 13th century Gregorian chant, Lauda Sion Salvatorem, and a rapturous brass “Alleluia!”