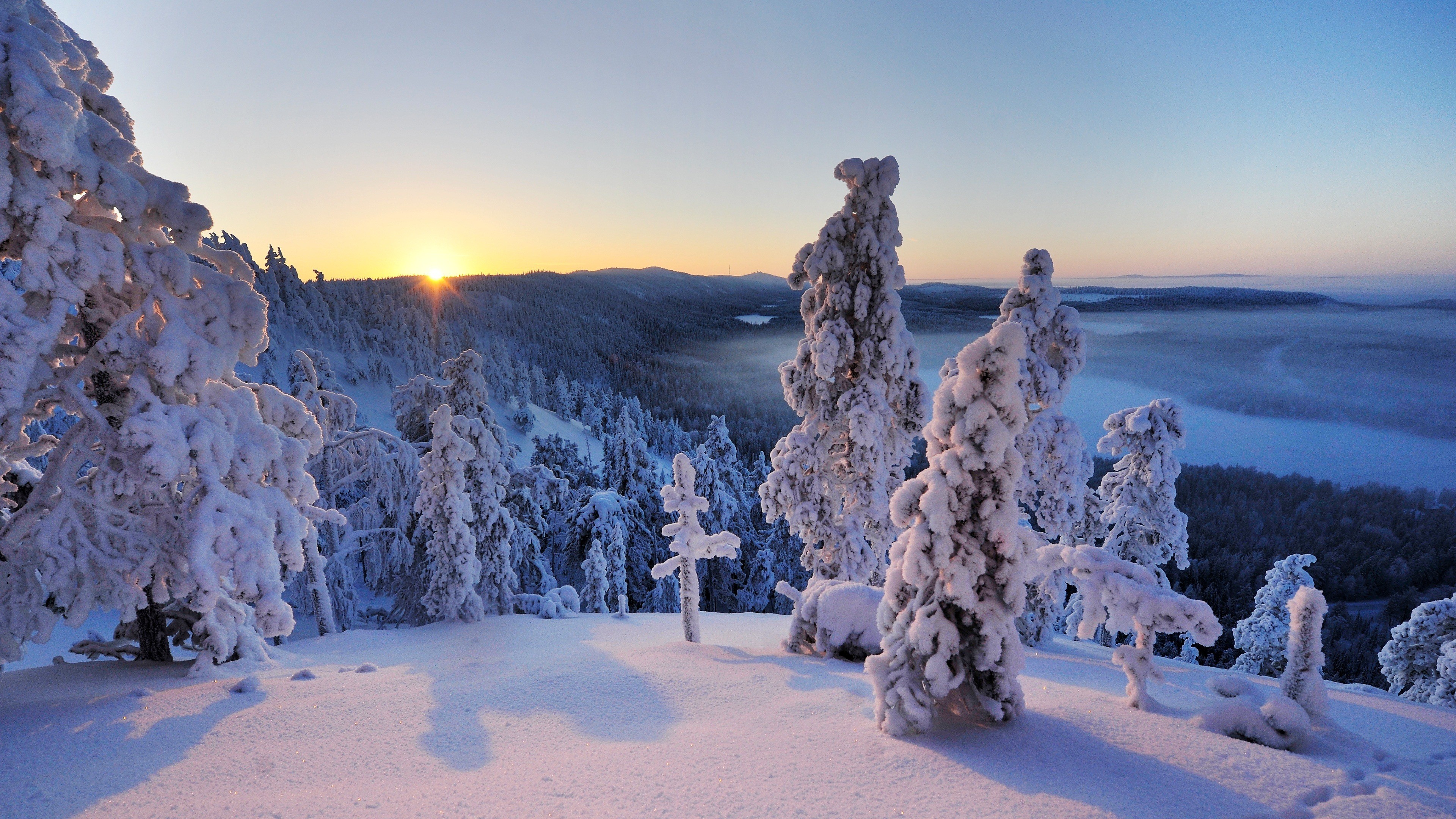 Jean Sibelius’ Symphony No. 5 in E-flat Major begins with the breadth and majesty of a vast, unfolding Nordic landscape. A mystical horn call rises and falls in an expansive arc, which opens the door to all that follows. Picked up by the woodwinds, the motif begins to fragment, spin, and develop with a sense of self-organizing inevitability.

In his famous meeting with Gustav Mahler, Sibelius expressed admiration for the symphony’s “style and severity of form, as well as the profound logic creating an inner connection among all of the motives.” On another occasion, he said,

I should like to compare the symphony to a river. It is born from various rivulets that seek each other, and in this way the river proceeds wide and powerful toward the sea.

The Fifth Symphony evokes nature’s divine logic. On one level, it gives us a sense of motion through continuous development. On a deeper level, it enters into a mysterious, eternal stasis. In a way which mirrors the cyclic nature of Finnish folk music, the Fifth Symphony is filled with rotating cells which end up where they began. This is music influenced by the bleak, remote landscapes of northern latitudes, where perceptions of time may be altered by seasonal cycles which involve extended periods of darkness alternating with light.

The Finnish government commissioned Sibelius to write the Fifth Symphony in 1915 to commemorate the composer’s fiftieth birthday. Over the course of two revisions, Sibelius “wrestled with God” to arrive at the “profound logic” of the Symphony’s final version in 1919. It is music which took a step back from the dissonant, modernist abyss of the Fourth Symphony, while simultaneously embracing new, formal innovations. While working on the first draft of the final movement in April of 1915, Sibelius wrote in his diary,

In the evening, working on the symphony. This important task which strangely enchants me. As if God the Father had thrown down pieces of a mosaic from the floor of heaven and asked me to work out the pattern.

The Fifth Symphony’s first movement (Tempo molto moderato; Allegro moderato, ma poco a poco stretto) bends traditional symphonic form. Unfolding as a gradual, irrepressible accelerando, it is actually a fusion of two movements, spliced together. The brakes are cut loose, and the initial moderato finds thrilling release in a kind of accelerating Scherzo. Alex Ross describes it as “a cinematic ‘dissolve’ from one movement to another.” Propelled by shivering string tremolo, the first movement is filled with attempted climaxes which hit a brick wall. Ominous shadows fall. In one passage (6:43), the tonal center evaporates temporarily, and the hushed strings suggest the distant howl of a Nordic gale while the lamenting solo bassoon wanders through a forlorn landscape.

The second movement (Andante mosso, quasi allegretto) is a set of variations on a simple, cyclic theme. At moments, there are echoes of Beethoven, or the sunny elegance of a country dance. A woodwind chorale opens the door to quietly tiptoeing pizzicati. As the variations unfold, the simple melody becomes increasingly embellished, while haunting suspended tones and creeping dissonances emerge in the winds. Again, there are moments of darkness and brooding. The final bars trail off with the brusk quality of a shy Scandinavian retort.

While working on the Fifth Symphony in 1915, Sibelius wrote in his diary,

Today at ten to eleven I saw sixteen swans. One of my greatest experiences! Lord God, what beauty! They circled over me for a long time. Disappeared into the solar haze like a gleaming silver ribbon.

It was this experience which inspired the iconic “Swan Theme” which forms the triumphant climax of the final movement  (Allegro molto – Largamente assai). Rising in the horns (1:16), the theme is a majestic musical palindrome, sounding the same forwards and backwards. A few moments later, a sudden turn from the home key of E-flat major to C major brings the Symphony’s most unabashed climax. The “Swan Theme” rings out as a celebration in the horns, while a passionate and noble hymn continues in the woodwinds. Just before the coda (6:23), a brief recollection of the first movement’s opening motif rises in the strings. This time, instead of the horn’s aspirational upward leap, we get the stoic realism of a half step amid rugged determination and exhaustion. The Symphony’s final moments bring a thrillingly cacophonous sonic blur. With effortful steps, this circular music seems to struggle to reach its ultimate transfiguring resolution. When he was working, Sibelius enveloped himself in extended periods of silence. The Fifth Symphony concludes with six searching musical thunderbolts, surrounded by haunting silence.