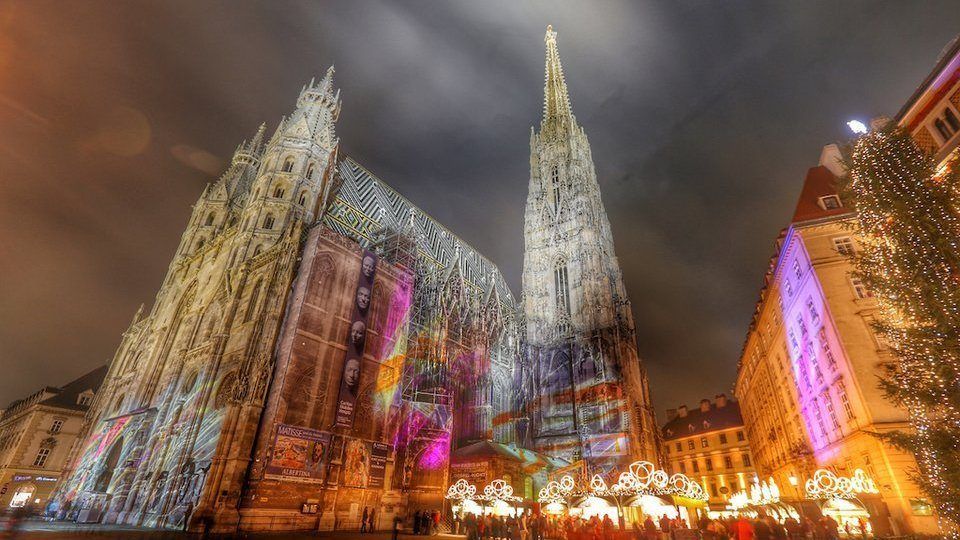 Today’s post celebrates the memory of Karl Haas, the German-American musicologist and host of the long-running radio program, Adventures in Good Music. One of the program’s most popular episodes, The Story of the Bells, aired for many years on Christmas Eve. It documented the varied sounds of church bells across Europe and the Middle East. In Haas’ words, “It’s an awesome sound…a sound which leaves no room for human voices.”

To continue this tradition, let’s listen to the awe-inspiring cacophony of the bells of Vienna’s St. Stephen’s Cathedral. In this recording, we hear 12 of the Cathedral’s 22 bells. Each bell joins the chorus, one by one, in a descending cascade of pitches (C, A, F, D, C, B, G, F, E-flat, G). The largest bell, called the Pummerin (“Boomer”), hangs in the north tower and weighs 44,380 pounds. A new bell has replaced the original Pummerin, cast in 1705 from the remains of 208 canons captured from Muslim invaders during the Second Turkish Siege of Vienna. It is said that Beethoven realized the extent of his deafness when he saw birds flying from the towers of St. Stephen’s, but could not hear the bells.

Over hundreds of years, the bells of St. Stephen’s Cathedral have been used for purposes which are both lofty and mundane. These include celebrations, funerals, religious services, fire alarms, and even a Bieringerin (“beer ringer” for last call at taverns). On this warm day, the bells formed a magical backdrop to the daily life of Vienna’s Stephansplatz as frolicking children chased bubbles blowing in the breeze:

Composed in 1912, Ralph Vaughan Williams’ Fantasia on Christmas Carols is scored for baritone, chorus, and orchestra. It includes folk carols which Vaughan Williams collected while traveling throughout southern England: The truth sent from above, Come all you worthy gentlemen, and the Sussex Carol. In the climactic final moments, a fragment of The First Noel weaves into the bass lines of the orchestra.