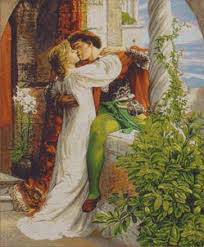 Shakespeare’s Romeo and Juliet has inspired composers from Berlioz to Prokofiev to David Diamond. One of this timeless tragedy’s most popular musical depictions was composed by the 28-year-old Pyotr Ilyich Tchaikovsky (1840-1893). Tchaikovsky called the work an Overture-Fantasy, but it can also be considered a tone poem.

Let’s listen to a live performance with the London Symphony Orchestra conducted by Valery Gergiev. Consider how Tchaikovsky’s music captures the deep emotions at the heart of the story. We hear the character of noble Friar Laurence in the stately Russian Orthodox chorale in the opening. Do you hear anything foreboding in this opening music? In the ferocious fast passages which follow, listen to the way Tchaikovsky pits the woodwinds against the strings in back and forth exchanges. Also notice the cymbal crashes depicting a sword fight (6:30).

One powerful element of the piece is Tchaikovsky’s ability to build and sustain great anticipation. In the passage following 7:01 the resolution we expect is delayed. When the music slips into the familiar “love theme”, we find ourselves in D-flat major, a world away from the previous tumult.

At 11:17 notice the opening chorale theme in the horns (and later the trumpets) as the development section begins. At 14:21 listen to the unrelenting, sustained pedal tone in the base instruments and the increasing tension which results. Pay attention to how this tension resolves. Consider how the final passage from 18:33 to the end captures the essence of the drama. What feelings do the final B major chords evoke?

Listen to Tchaikovsky’s Romeo and Juliet a few times and come back tomorrow for more music relating to Valentine’s Day.

My bounty is as boundless as the sea, My love as deep; the more I give to thee, The more I have, for both are infinite.

“See how she leans her cheek upon her hand. O, that I were a glove upon that hand That I might touch that cheek!”

O teach me how I should forget to think…

1 thought on “Tchaikovsky’s Romeo and Juliet”