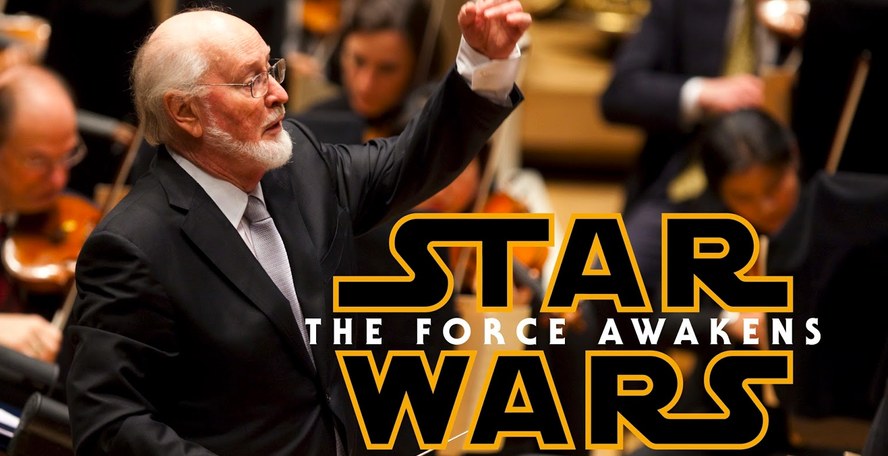 I haven’t yet had the chance to see the new Star Wars movie, The Force Awakens, or to fully experience its richly symphonic score in the theater. A film score is designed to serve its movie. The music comes to life as part of a greater whole, a Gesamtkunstwerk (“total work of art”), to use Wagner’s term. Still, I haven’t been able to resist listening to excerpts from the score which, recently, have been floating around in an internet galaxy close to home.

Considering the popularity of the Star Wars score (this newest soundtrack has already sold over 94,000 copies), I’ll probably be playing some of this music in the orchestra in the not-too-distant future. Believe it or not, the original Star Wars themes, written over forty years ago, are still wildly popular with elementary school-age children…a testament to the enduring quality of this music.

Star Wars, influenced by the archetypes of Jungian psychology and mythology, has been compared to Wagner’s Ring Cycle. In many ways, the music of Star Wars and Wagner’s epic operas function similarly. Both unfold in a long, seemingly continuous arc of music. The drama is often driven by the orchestra rather than singing or dialogue. Key scenes in the early Star Wars movies have surprisingly little dialogue, as George Lucas pointed out in an interview during the production of Star Wars Episode II: Attack of the Clones:

About 90 percent of the Star Wars films are music. It’s done in a very old-fashioned style, as silent films, so that the music kind of tells the story. A lot of the emotional content is carried through the music as much as through the scenes themselves…The score is a very, very important element of the success of the [Star Wars] movies. Without somebody as brilliant as Johnny doing the scores, I don’t think they would have been as successful as they were. The score is a major element. It’s equal to the script or the cast, easily.

The music of Wagner and Star Wars are both fundamentally motivic. Connections and associations with characters and ideas are made frequently through leitmotifs. These are often fleeting references which suddenly emerge out of the deeply contrapuntal fabric of the music and quickly dissolve. But they occur at crucial moments, and powerfully influence the way we perceive the drama. For example, two recognizable Star Wars leitmotifs weave together in this excerpt (Enter Lord Vader) from early in the first movie. (Listen to the trumpets around the 16 second mark and consider the way Princess Leia’s theme is transformed). Keep listening, and you’ll hear an interesting reference to Bela Bartok’s Miraculous Mandarin. Fast forward to this lushly romantic music from The Force Awakens (Han and Leia) and you’ll hear similar leitmotifs in succession. A battle takes place between leitmotifs in this excerpt, heard later in The Force Awakens (music vaguely reminiscent of the first movement of Mahler’s Third Symphony).

John Williams’ influences extend beyond Mahler and Bartok to include most of the significant composers of the twentieth century, from Shostakovich to Stravinsky. For example, compare this recurring motive and this moment towards the end of Howard Hanson’s Second Symphony. Or listen to Carl Orff’s Carmina Burana and compare it with Duel Of The Fates from The Phantom Menace. In Han Solo Returns  from Return of the Jedi, Williams slips into the eerie atonality of Schoenberg, with a hint of late-Mahler angst. At times, he captures the hazy, shimmering exoticism of Alan Hovhaness. Beyond the regal Throne Room music at the end of the first movie, Williams’ trademark closely-voiced brass bell tones and swirling string and woodwind lines owe a lot to William Walton’s Crown Imperial March. Then, there are the obvious similarities between the Star Wars main title music and Erich Wolfgang Korngold’s 1941 score for the film, Kings Row. The Force Awakens score occasionally evokes the sense of timeless mystery we hear in Saturn, the Bringer of Old Age and Neptune, the Mystic from Gustav Holst’s orchestral suite, The Planets.

One of the most popular excerpts from Star Wars: The Force Awakens is the expansive Rey’s Theme. It opens with a jaunty, dance-like motive which seems to have stepped out of the first movement of Antonín Dvořák’s “New World” Symphony. This music goes far beyond the simple melody and accompaniment we hear in other film scores. Listen to the rich, shifting harmonic tapestry at work. For example, notice the sudden and brief move to minor at 0:50. A simple, straightforward, static harmony could easily have worked at this moment, but the harmonic jumpiness of Williams’ downward sequence conveys a different feeling. Listen to all of the contrapuntal details, like the irregular pizzicato bass line, beginning around 0:33. At 0:46, in the horns, you’ll hear the close, brassy “William Walton” sound I mentioned earlier.