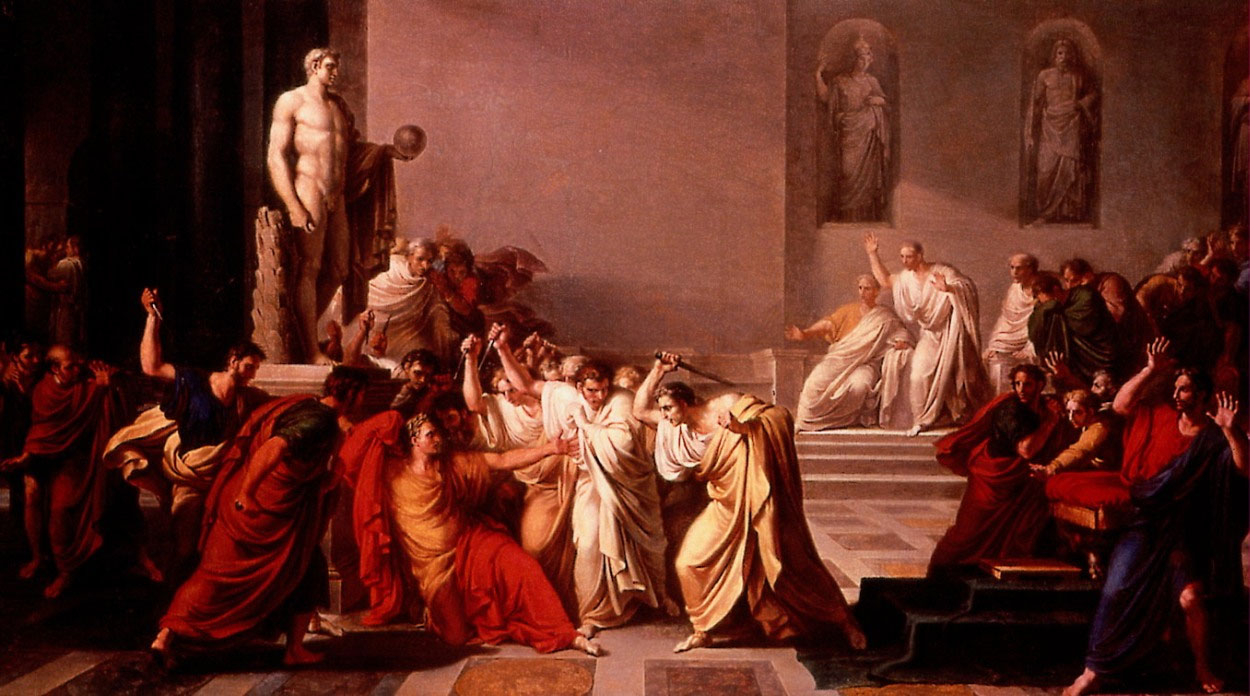 Beware the ides of March.

Tomorrow marks the “Ides of March,” the date when Julius Caesar was assassinated on the floor of the Roman Senate in 44 B.C. Dramatized by Shakespeare in 1599, Caesar’s stabbing coincided with Rome’s irreversible evolution from Republic to Empire.

Let’s listen to two pieces which were inspired by the life and legend of Julius Caesar:

Julius Caesar, George Frideric Handel’s 1724 opera in three acts, doesn’t follow Shakespeare’s play. Instead, it recounts the love story between Caesar and the cunning seductress Cleopatra. Along the way, we get a host of supporting characters and complicated subplots. One of these involves efforts by Cordelia and her stepson Sesto to avenge the beheading of Pompeo (Cordelia’s husband) by Tolomeo, who rules Egypt with his sister, Queen Cleopatra.

If the synopsis is cumbersome, it provides the backdrop for some of the most powerful and dramatic operatic music ever written. In keeping with the conventions of baroque opera, it’s music which relies almost entirely on high voices: sopranos, mezzo-sopranos, and altos. In Handel’s time, the role of Caesar was sung by Senesino, an Italian castrato who enjoyed celebrity status similar to today’s sports figures. Women and countertenors take the place of castrati in modern productions. You can get a sense of the vocal virtuosity of the role in Al lampo dell’armi, an aria from the second act, in which Caesar refuses to retreat from approaching enemies.

But let’s return to Cordelia and Sesto. Act 1 closes with an intimate, lamenting duet between mother and son (Son nat a a lagrimar) as they face imprisonment. Halting, descending gestures in the introduction seem to evoke sighing or weeping. Listen to the way Sesto answers Cordelia with a sudden, brief turn to major. At this moment, notice the sense of mystery and foggy ambiguity created by subtle suspensions in the accompaniment. And notice the occasional biting dissonances in the orchestra lines. Despite all of this darkness, a sense of dance-like motion remains in the underlying rhythm.

This excerpt from a 2005 Royal Danish Opera production features Randi Stene as Cordelia and Tuva Semmingsen as Sesto:

In the opening of Act 2, a disguised Cleopatra charms and seduces Caesar (the aria V’adoro, pupil). Later in Act 3, she believes that Caesar has been defeated and killed. Here is Cleopatra’s lament, Piangerò la sorte mia, sung by Renee Fleming:

You won’t hear any direct references to Shakespeare’s play or the life of Caesar in Robert Schumann’s 1851 Julius Caesar Overture, Op. 128. But the music takes us on a stormy, heroic adventure which ends in a majestic final flourish. The Overture is filled with the sounds of battle: trumpet and horn calls and drum beats. According to British musicologist Eric Sams, the opening may be built on a musical cryptogram: C-A-E-S-A-R, using the German musical notation.

1 thought on “Beware the Ides of March: Musical Reflections on Julius Caesar”