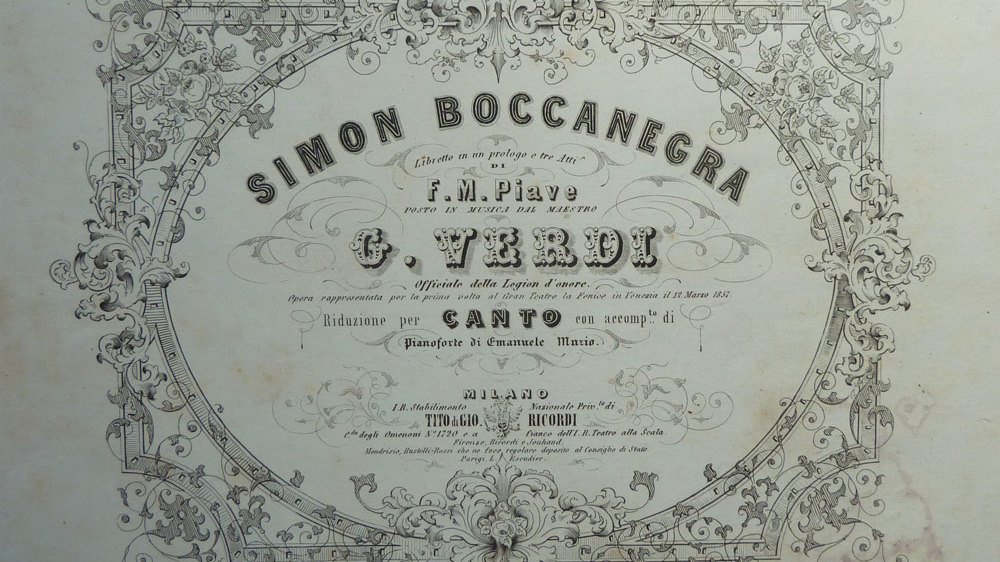 The premiere of the first version of Giuseppe Verdi’s three act opera, Simon Boccanegra, took place in Venice on this date (March 12) in 1857. At this first performance, the dark, historical drama, once described by the composer as “too sad and desolate,” was a flop. Verdi returned to the work over twenty years later with an 1881 revision that was more successful. This is the version that is most often heard today. It contains some of the composer’s most spellbindingly dramatic music.

Set in the 1300s amid endlessly waring Italian city-states, Simon Boccanegra has been called, “one of the most incisive depictions of politics ever put on the stage.”  In the opera’s Prologue, Boccanegra, a sea captain, allows himself to be nominated for Genoa’s highest political office. He hopes the position will convince the aristocratic Fieschi family that he is worthy of marrying their daughter, Maria. Maria has already given birth to Boccanegra’s daughter and her furious family has locked her away in the palace. By the end of the prologue, we learn that Maria has died and the child has wandered off. When the curtain rises on Act I, twenty five years have passed. In a memorable duet, Boccanegra comes face to face with his long lost daughter, Amelia. A complex web of events unfolds for the remainder of the opera. Los Angeles Opera Music Director James Conlon writes,

Simon Boccanegra, above all, is a man of peace, and the opera a tale of the power of reconciliation. Simon’s greatness as a leader resides in his valiant (if sometimes fruitless) efforts to promote harmony and understanding within the Italian peninsula—the republics of Venice and Genoa, the Patricians and the Plebeians, the Guelphs and the Ghibellines. The most moving scenes in the opera (Simon’s discovery of his long lost daughter, and his unexpected reunion with Fiesco after a quarter-century’s enmity) evoke profound feelings of joyous release from tragic separations and hostilities. In his dying moments, he blesses his daughter’s marriage to one who had been his lifelong enemy, and appoints him as his successor, in order to bring together the warring factions that had troubled his entire reign. He lives long enough (just barely) to fulfill the covenant with Fiesco to locate the missing Maria, and he dies having realized his two greatest desires: to find his daughter, and to deliver her to her mother’s father. His tragedy is to have died at the moment of his greatest happiness, enjoyed for only several hours at the end of a life lived in service to his people.

With Simon Boccanegra, Verdi moved away from bel canto opera, with its recitative-aria structure, towards something more “through-composed” in which arias further the plot and the orchestra gains dramatic importance. As David Kimbell points out, in the Prologue, “the dialogue, instead of being punctuated by the customary figurations of accompanied recitative, is set against a gravely flowing orchestral theme.” In its revised version, this was the first opera in which Verdi dispensed with an overture or prelude. Instead, the curtain rises and we’re thrust into the Prologue. Consider all the ways Verdi could have started this opera. Then, listen to the way the quiet warmth of the opening bars draw us in, immediately:

In Il Lacerato Spirito, Fiesco angrily laments the death of his daughter, Maria. He rages against Simon Boccanegra who is not present. He accuses the Virgin Mary of not protecting his daughter. Then, realizing that he has committed blasphemy, he prays for forgiveness. All of Fiesco’s heartache and bitterness seems to be encapsulated in the opening half step motive. The gloomy soliloquy fades into music which resembles a solemn funeral dirge:

Here is the duet scene in Act I where Simon Boccanegra realizes, suddenly, that the woman standing in front of him is his daughter. Listen to the sense of anticipation in the music around the 4:30 mark as Boccanegra asks Amelia a series of questions. Notice the way the music breathlessly gains intensity and surges forward, like a quickening heartbeat. Then, the orchestra erupts into a climax of soaring euphoria:

Verdi’s 1881 revision added the tumultuous Council Chamber scene as the Finale of Act I. Listen to the way the orchestra becomes fully integrated in the drama in this scene. James Conlon writes,

By far the crown jewel of the opera is the Council Chamber Scene. It stands as one of Verdi’s greatest accomplishments. One step before Otello, he demonstrates the heights to which he and Arrigo Boito (whom he engaged to test a hypothetical future collaboration) will soar in Otello and Falstaff. For grandeur, depth, concision and inspiration it is second to none. Simon is portrayed as a fearless and visionary leader of his people. His appeal for peace with the enemy city-state of Venice and the conflicting political factions of the Plebeians and Patricians are eloquent avowals of the tenets of Italy’s recent unification. Finally, his brilliant manipulation of the guilty Paolo, shaming him publicly by forcing him to curse himself in front of the entire populace, provides one of the most hair-raising curtains in Verdi’s entire output.

Adorno’s second act aria, Sento avvampar nell’anima, captures his jealous rage at the thought that Amelia might be Boccanegra’s mistress:

Franz Liszt created this solo piano paraphrase on the music of Simon Boccanegra. Liszt focuses on three scenes from the opera: the Prologue’s opening interlude, the finale of Act II, and Boccanegra’s death scene at the end of the opera. Here is Claudio Arrau’s recording: