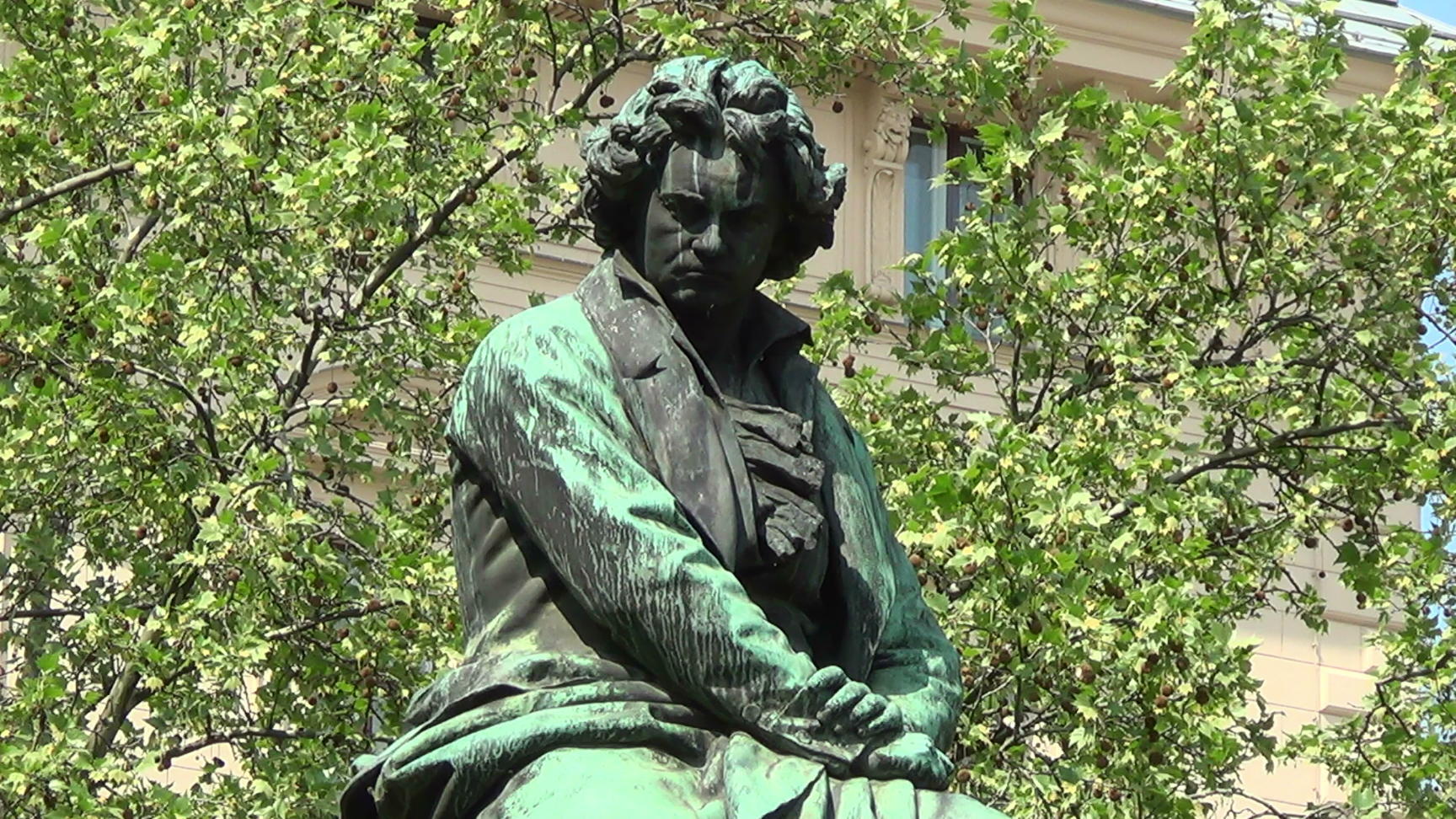 Ah, we shall never be able to do anything like that!

Apparently, Beethoven made this remark to the pianist-composer Johann Baptist Cramer after hearing Mozart’s stormy Piano Concerto No. 24 in C minor, a piece we explored last week. Beethoven’s enthusiasm for Mozart’s Concerto is a testament to its sublime, haunting drama and even Romantic foreshadowings. You can hear its influence in the first movement of Beethoven’s Third Piano Concerto, also in C minor. Mozart’s music is clearly a model, yet in the Third Concerto, Beethoven moves beyond into new territory. In his 1971 book, The Classical Style, Charles Rosen writes,

There are many passages in the first movement, Allegro con brio, which allude to Mozart’s concerto in the same key…particularly the role of the piano after the cadenza. But the striking development section, with [a] new melody half-recitative [and] half-aria, is entirely original, as is the new sense of weight to the form.

The first movement, Allegro con brio, opens with a long, powerfully expansive, orchestral introduction. It is capped off with a bold, declamatory statement- a fortissimo version of the motive which made its tiptoeing entrance in the opening bars. The piano roars to life with ascending scales and then repeats the same declamatory statement before embarking on the movement’s adventures. It defiantly marks its territory and announces itself as an equally powerful presence alongside the voices of the orchestra. We hear all of the raw ferocity and heroism of Beethoven’s C minor, the significance of which we explored in an earlier post. Brimming with revolutionary fire, this is the key of the Pathétique Sonata, the funeral march of the “Eroica” Symphony, the searing Seventh Violin Sonata, the Coriolan Overture, and the Fifth Symphony. So, while there is a nod to the haunting C minor of Mozart’s Concerto, Beethoven’s C minor takes on a new, heroic color. Listen to the way the “C-G-C-G-C” motive from the third measure shows up as a persistent presence throughout the movement.

Moving to the distant key of E major, the second movement, Largo, takes us to a completely different world which seems to foreshadow the serene opening of Beethoven’s Fourth Piano Concerto. This is music which lulls us into a gentle trance. Listen to magical way the piano’s strange, ascending scales in this passage add a mysterious new statement to the orchestra’s warm foundation. We hold our breath in the lamenting coda as time almost seems to stop.

The Rondo final movement is filled with humor and exuberant, sparkling frivolity. As the music unpredictably turns towards a gruff, snarling C minor, it becomes “frightening” humor. It’s like a jovial person who suddenly yells, “boo!” There is a dark edge underneath all of this teasing. The sparkling coda drives towards its final cadence with an “edge-of-your seat” exuberance and abandon.

At the premiere in Vienna on April 5, 1803, Beethoven’s Second Symphony and the oratorio, Christ on the Mount of Olives, were also performed. Ignaz von Seifert, the Theater an der Wien’s conductor, described the terrifying experience of turning pages for Beethoven during the Concerto. Apparently, the composer had not yet written down the piano part and played mostly from memory:

I saw almost nothing but empty leaves; at the most, on one page or another a few Egyptian hieroglyphs, wholly unintelligible to me were scribbled down to serve as clues for him; for he played nearly all of the solo part from memory since, as was so often the case, he had not had time to set it all down on paper. He gave me a secret glance whenever he was at the end of one of the invisible passages, and my scarcely concealable anxiety not to miss the decisive moment amused him greatly and he laughed heartily at the jovial supper which we ate afterwards.

1 thought on “The Anxiety of Influence: Beethoven’s Third Piano Concerto”