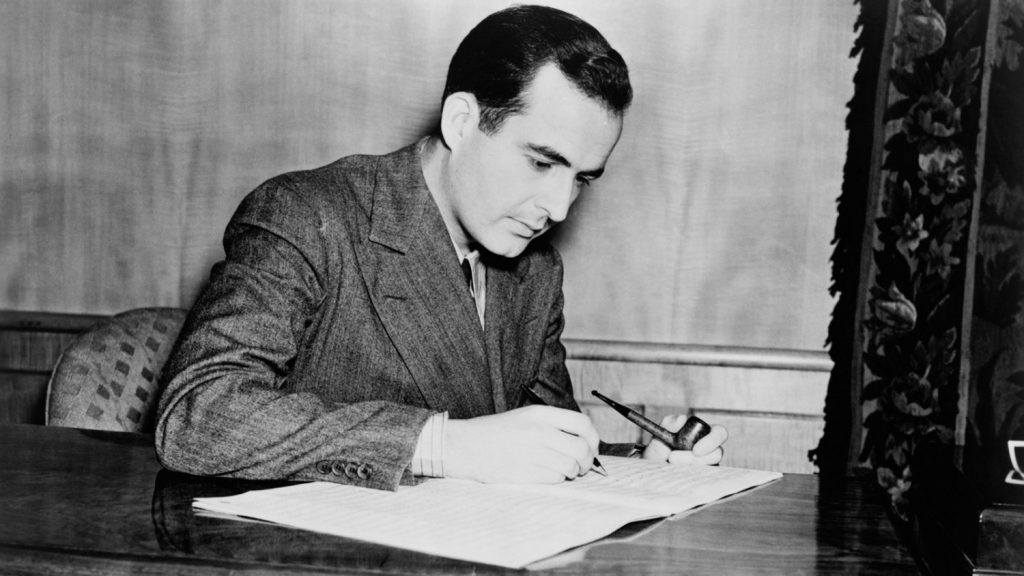 I myself wrote always as I wished, and without a tremendous desire to find the latest thing possible…

An unwavering and unapologetic honesty characterizes the music of American twentieth century composer Samuel Barber (1910-1981). This is in contrast to the prevailing winds of the academic establishment of the time, who were interested in advancing the musical language in search of some far-off, theoretical, and ultimately elusive goal. Barber’s music is rooted in tonality, yet to my ears it still embodies the turbulent angst of the twentieth century. From the ominously repeating four note motive of Music for a Scene from Shelley, to the terrifyingly intensifying passacaglia which concludes the Symphony in One Movement, to the lament and harmonic ambiguity of Adagio for Strings, this is music in which titanic powers seem to rise up. We realize that the sounds of the twentieth century are not limited to twelve tone rows.

In Samuel Barber’s Violin Concerto, completed in 1939, the solo violin and orchestra are woven together in a rich and colorful drama. The first movement opens with an expansive, seemingly unending, and constantly striving melody. This is music filled with autumnal nostalgia- something similar to the distinct atmosphere of late Brahms. There is no long orchestral introduction, which would imply the kind of “soloist versus orchestra” drama we hear in other concertos. Instead, the solo violin emerges out of the full ensemble and becomes one of a number of conversing voices, which include the recurring low strings pizzicato figures. Amid this opening movement’s lush beauty and warmth, there are momentary glimpses of something darker. For example, the brief cadenza at the end of the movement exhibits genuine terror. Notice the way these moments arrive suddenly, and then fade away just as quickly.

Perhaps in a nod to the Brahms Violin Concerto, the second movement opens with an extended oboe solo. We’re pulled into a world of sensuous beauty and pastoral lament in which voices from the past seem to reemerge. As the solo violin awakens, the hushed strings fade into a vast, cosmic backdrop. Listen to the quiet intensity of this suspended chord, which we begin to hear as pure sound rather than part of conventional harmony. Taking a sudden ominous turn toward minor, the beautiful oboe melody of the opening seems to be a distant memory. Then, suddenly we turn a corner and the solo violin embraces the opening melody. Near the end of the movement, there is another brief, anguished cadenza which echoes the first movement. The final bars fade into serene acceptance.

The final movement is a brief, wild, moto perpetuo romp. At moments there are hints of American fiddle playing. As the trumpets and horns call out in the last bars, the Violin Concerto concludes with both exhilaration and edge-of-your-seat terror:

The Philadelphia businessman Samuel Fels, the manufacturer of Fels Naphtha soap, commissioned this Concerto for Iso Briselli, a prodigy violinist who graduated from the Curtis Institute of Music the same year as Barber. The young composer wrote the first two movements in Switzerland during the summer of 1939. After seeing the first two movements, Briselli asked for a more virtuosic finale. Some stories suggest that Briselli rejected the final movement as “unplayable” and aesthetically not suited to the other movements. It now appears that the violin teacher Albert Meiff found the Concerto unacceptable. The premiere was given by Albert Spalding in February, 1942, with Eugene Ormandy leading the Philadelphia Orchestra.