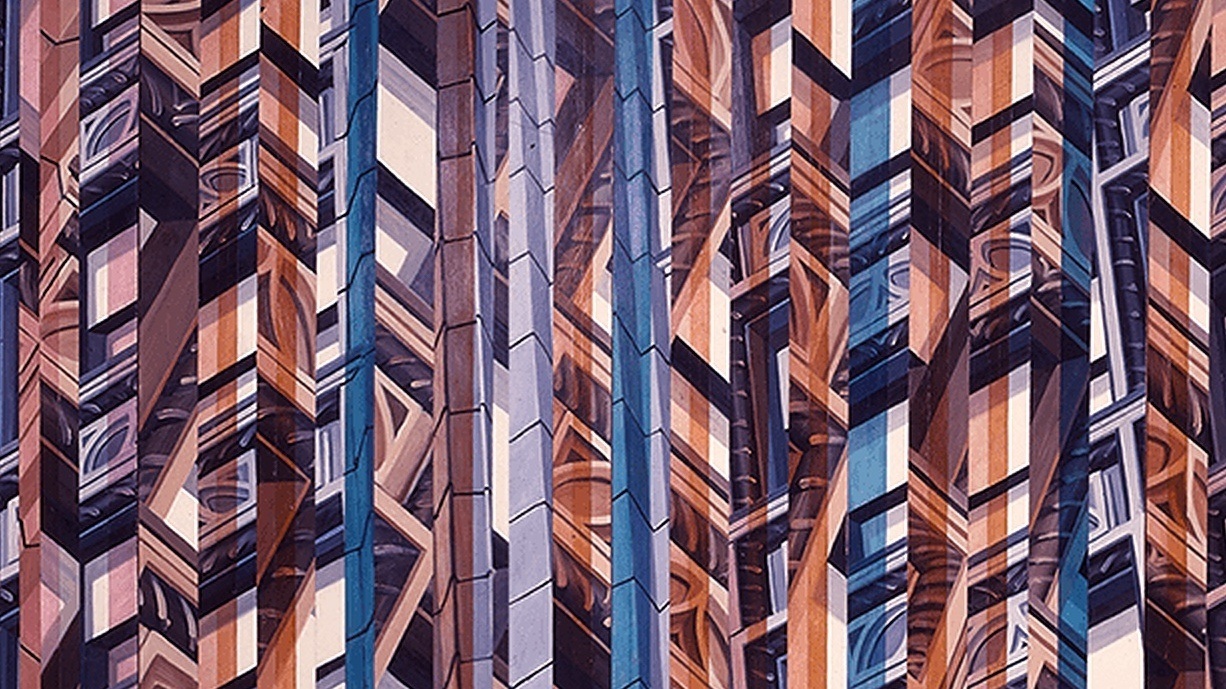 Igor Stravinsky’s Symphony in Three Movements is a delirious celebration of rhythm.

This bright, exuberant music leaves behind the rapturous, primordial jabs of The Rite of Spring to enter the crisp, spare world of neoclassicism. Witty and spirited conversations unfold between instrumental voices. Quirky, irrepressible ostinatos propel the music forward amid unpredictable and swiftly changing rhythmic currents. The outer movements hurtle forward with the hyper, unrelenting energy of an action film, whisking us from one harrowing cinematic scene to another.

The commentator, Andrew J. Browne said, “Stravinsky is perhaps the only composer who has raised rhythm in itself to the dignity of art.” Architectural rhythm consists of similar repeating lines and patterns, created by bricks, window frames, and classical orders. Symphony in Three Movements often feels “constructed,” developing in spacial “blocks” of time. “Frozen music” and literal music merge in a series of paintings, created around 1980 by the intermedia artist Jack Ox. Through visual mappings, Ox synthesized Stravinsky’s score with New York architecture from the 19th and early 20th centuries.

Completed in 1945, the Symphony in Three Movements was the first major work Stravinsky composed after emigrating to the United States. At times, the music seems to swing and swagger with a uniquely American energy. For example, listen to the infectious rhythmic groove which takes hold 48 seconds into the first movement. Here, jazzy riffs in the strings and winds erupt over a repeating, ascending three-note bass line. John Adams seems to pay subtle homage to this passage in his enchanting 1985 foxtrot, The Chairman Dances. A few moments later (1:47), a flurry of descending scales suggests the zany cartoon music depicted in Adams’ Chamber Symphony. The darting woodwind lines in this passage from the final movement may remind you of the exhilarating, youthful dance music from Leonard Bernstein’s West Side Story. The Symphony concludes with a blazing D-flat sixth chord which is filled with the brash exuberance of a jazz big band. Ringing out over six octaves and punctuated by a triumphant stinger, this final chord says, “The End,” with the ultimate Hollywood Technicolor flourish.

Stravinsky considered calling this piece “Three Symphonic Movements.” In some ways, it’s a reluctant or accidental symphony. Commissioned by the New York Philharmonic, it emerged slowly out of disparate elements. Originally, Stravinsky conceived the first movement as a kind of concertante for solo piano and orchestra. The second movement, in which the harp takes centerstage, was part of Stravinsky’s abandoned film score for the 1943 Hollywood drama, The Song of Bernadette, based on a novel by Franz Werfel. The music was to have accompanied the film’s Apparition of the Virgin scene. (Ultimately, Stravinsky never signed the contract and Alfred Newman went on to win an Oscar for the film’s score). In the third movement, the piano and harp are united, playing together briefly at what the composer called the “turning point fugue.”

In his program notes for the January 24, 1946 premiere at Carnegie Hall, Stravinsky insisted that the Symphony was absolute music. Just over ten years earlier in his autobiography, he had written provocatively, “I consider that music, by its very nature, is essentially powerless to express anything at all…” In his 1963 book with Robert Craft, Dialogues and a Diary, the composer reversed course, referring to the work as a “war symphony” and describing a detailed program inspired by newsreel footage of “scorched-earth tactics in China,” “goose-stepping soldiers,” and the ultimate victory of the Allies. Yet, the jubilant and surreal musical landscape which unfolds in the Symphony in Three Movements goes beyond all of this. Stravinsky, himself, seems to have understood this. Moments after outlining his program, he provided this amusing retraction:

But enough of this. In spite of what I have said, the Symphony is not programmatic. Composers combine notes. That is all. How and in what form the things of this world are impressed upon their music is not for them to say.

Featured Image: part of a 1979 painting by Jack Ox, inspired by Stravinsky’s “Symphony in Three Movements”