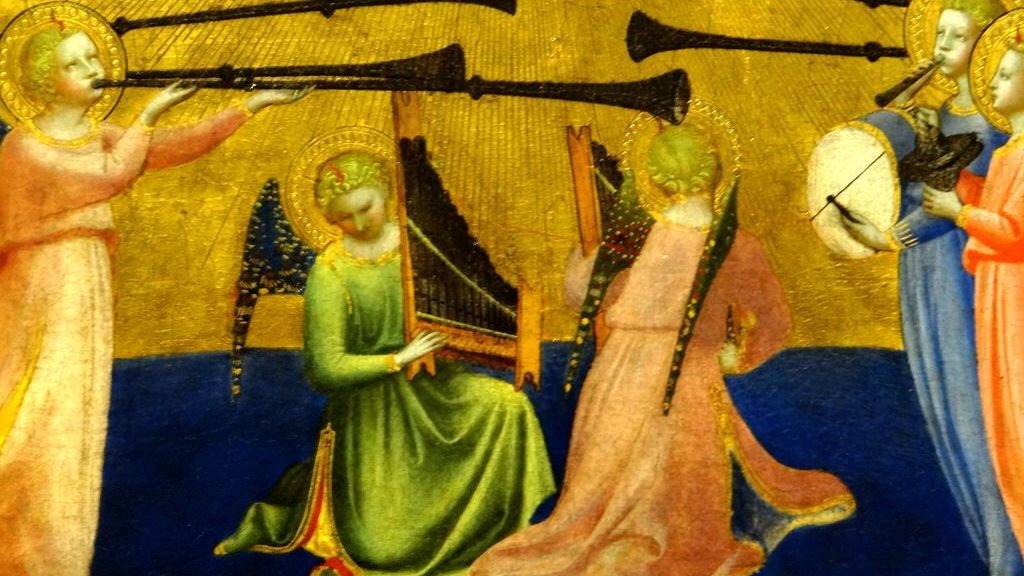 The American composer Alan Hovhaness (1911-2000) was one of the twentieth century’s greatest musical mavericks.

As a student at Tanglewood in the 1940s, Hovhaness’ music was ridiculed by the establishment so severely that he withdrew from the school and abandoning his scholarship. Famously, over the course of two weeks in the 1930s, he burned some 1,000 scores that he considered to be mediocre. Following this purge, an authentic new voice emerged. A vast melting pot of influences bubbled to the surface, which included exotic Eastern scales, modal harmony, Armenian liturgical chant, and majestic, celestial chorales. Hovhaness, himself, was of Armenian and Scottish heritage.

This magical melting pot is evident in Hovhaness’ 1967 fantasy for orchestra, Fra Angelico. The title refers to the Early Renaissance Italian painter, who according to Hovhaness, “painted in the Eastern spirit.” The composer wrote,

As in old China, Korea, and Japan, artists painted celestial musicians descending from heaven to earth, so in Florence, Fra Angelico painted his visions of angels playing celestial trumpets. His vision inspired my use of trumpets, horns, and trombones in adorational, cantorial music. In my music these instruments become voices of celestial messengers.

In a 1983 interview, Hovhaness provided additional thoughts on Fra Angelico and the inspiration for the piece:

As an artist he was a naïve painter, perhaps, but a kind of mystical, mediumistic painter, painting angels and so on – perhaps what Francis Bacon called the celestial or higher intelligences. I think it’s what he stood for, rather than the painting itself, that influenced me; the kind of joining together of heaven and earth, like the ideal of Chinese painting. Fra Angelico is a psychic painter in my way of looking at things. He was really painting his visions of the “angelic intelligences”, as Bacon called it, and I was referring to psychic painting when I wrote the work Fra Angelico. Actually, to me that particular theme had come in a strange and visionary way; I’d been very ill and I’d thought I wasn’t going to be able to go to a concert which I was supposed to go to, in connection with my work. And suddenly I found myself singing the main melody, and I suddenly realised I was healed, I wasn’t ill anymore. It came like a vision – like an angelic vision – and that’s why I gave it that title, so it was not just the artist Fra Angelico, but actually the kind of angelic vision that I was referring to.

Fra Angelico is filled with shimmering, angelic colors and celestial canons. It inhabits a vast, seemingly timeless, cosmic sea. There are aleatoric passages which call for musicians to play a series of pitches at undesignated speeds. This improvised “structured randomness” briefly enters the world of chance music. Hovhaness referred to these sections, which occur throughout much of his music, as “spirit murmurs.”