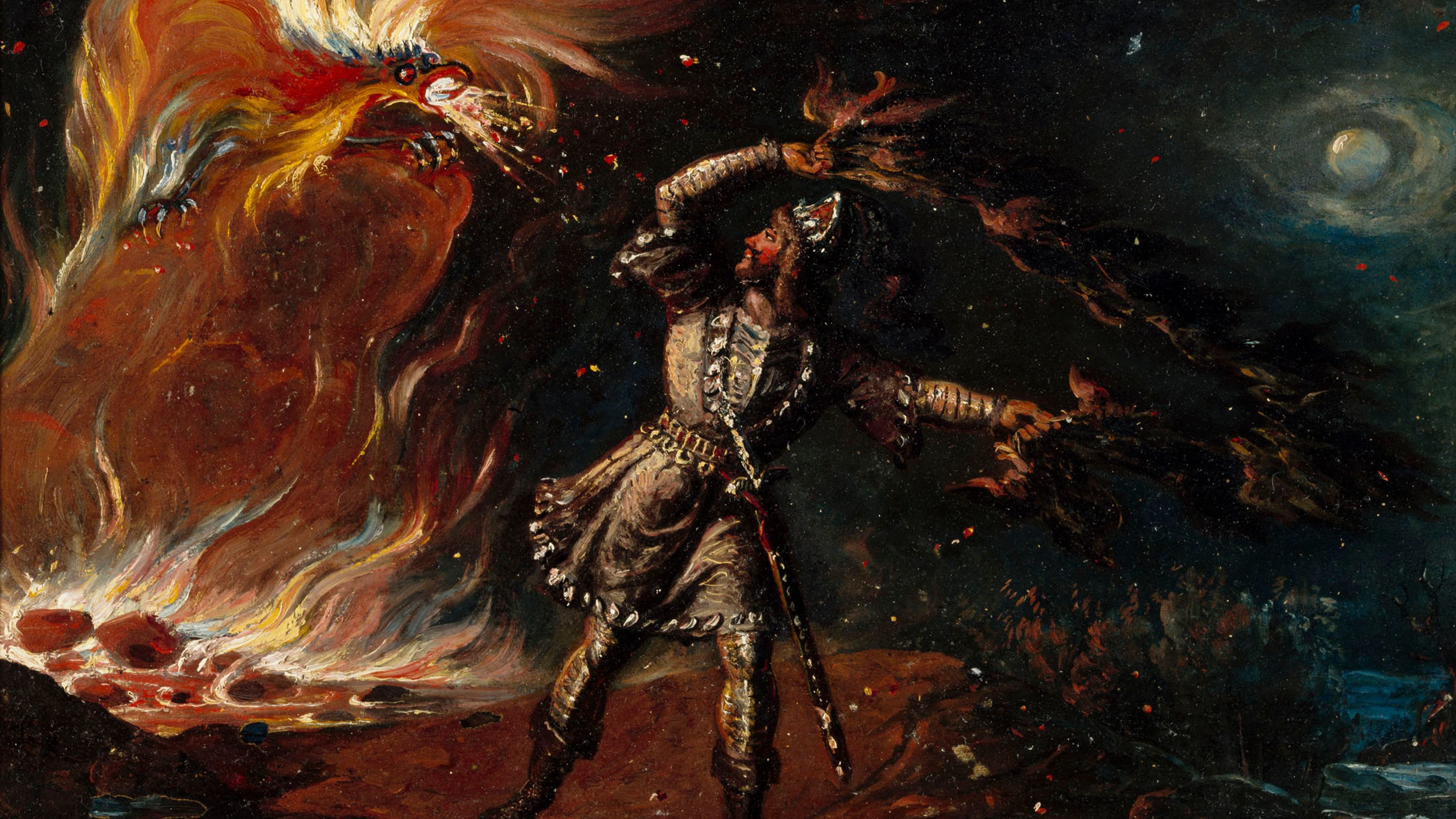 Lemminkäinen is a shamanistic figure from the frigid depths of Finnish mythology. Throughout the epic poetry of the Kalevala, where he represents an amalgamation of characters, Lemminkäinen takes the form of a young, heroic warrior. Occasionally described as a “handsome, arrogant and reckless” seducer, he is the son of Lempi, the Finnish goddess of love and fertility.

The adventures of this epic hero provided the inspiration for Jean Sibelius’ Lemminkäinen Suite, a collection of four symphonic poems completed in 1895. Initially, the young Sibelius intended to write a mythological opera entitled Veneen luominen (“The Building of the Boat”), which would follow the example of Wagner’s Ring cycle. The project was abandoned and quickly Sibelius turned away from Wagner’s influence. Yet, the operatic sketches provided the seeds for the Lemminkäinen Suite. The score underwent a revision in 1897 and then, with the exception of The Swan of Tuonela, it fell into obscurity. The final revision came in 1939 around the time Sibelius abandoned work on the elusive Eighth Symphony and came to the painful realization that the muse had departed him. The Lemminkäinen Suite was not published until 1954.

I. Lemminkäinen and the Maidens of the Island

The Lemminkäinen Suite is not overtly programmatic in its storytelling. Instead, it is magically evocative in a vague, atmospheric sense. It is haunting, primordial music, filled with mystery, darkness, and brooding. It unfolds gradually over awesome cinematic expanses of space and time.

The first movement, Lemminkäinen and the Maidens of the Island, begins with a mystical call to order in the horns. Clear, icy tones emerge from the strings and woodwinds before evaporating into silence. This music was inspired by Canto 29 of the Kalevala. Lemminkäinen springs to life as a fearless Don Juan figure, traveling to a remote island and seducing as many women as he can and then fleeing the wrath of the returning men. Soon merriment erupts in the form of a joyful, rugged Nordic folk dance. Yet, this exotic musical daydream goes far beyond mere frivolity. Shivering excitement intensifies into a raging fire of Dionysian passion. Following a titanic climax, the scene fades into memory.

II. The Swan of Tuonela

As a preface to the score of The Swan of Tuonela, Sibelius inscribed the following quote from the Kalevala:

Tuonela, the land of death, the hell of Finnish mythology, is surrounded by black waters and a rapid current, on which the Swan on Tuonela floats majestically, singing.

The lamenting voice of the English horn sings a haunting, eternal song. Anguished interjections rise from the solo cello. The string section, divided into thirteen parts, is a shimmering sonic sea. Searing waves crest and fall. In the final moments, we hear the hypnotic pulse of a funeral procession in the harp. Filled with desolation, this beautiful and terrifying music anticipates the intimate, psychological world of Sibelius’ Fourth Symphony.

In the story, Lemminkäinen has been sent to kill the mystical swan which guards the land of the dead. The swan is saved by a blind cowherd who kills Lemminkäinen with a poison arrow and throws his body into the river. Lemminkäinen’s decapitated body is reassembled and brought back to life by the supernatural powers of his mother.

The third movement begins with icy tremolo in the strings. Composed long before motion picture soundtracks, this music unfolds as the most terrifying and chillingly suspenseful film score. Ghostly lines rise and fall in a series of ominous, gradually intensifying canons. These are the strange ghoulish sounds of the night. The climax comes as an awe-inspiring, apocalyptic inferno. In 1948, Sibelius recalled that “the lullaby at the end of the piece represents maternal love, which rakes up the pieces of Lemminkäinen from the river of Tuonela.”

The final movement is a galloping rondo. Inspired by Canto 30 from the Kalevala, it is an exhilarating ride home following harrowing adventures and hard-won battles. The motivic seed for the entire movement develops from the opening bassoon statement. The moment of arrival comes in the final bars with a blazing and celebratory resolution in E-flat major.

2 thoughts on “Sibelius’ “Lemminkäinen” Suite: Four Legends from the Kalevala”