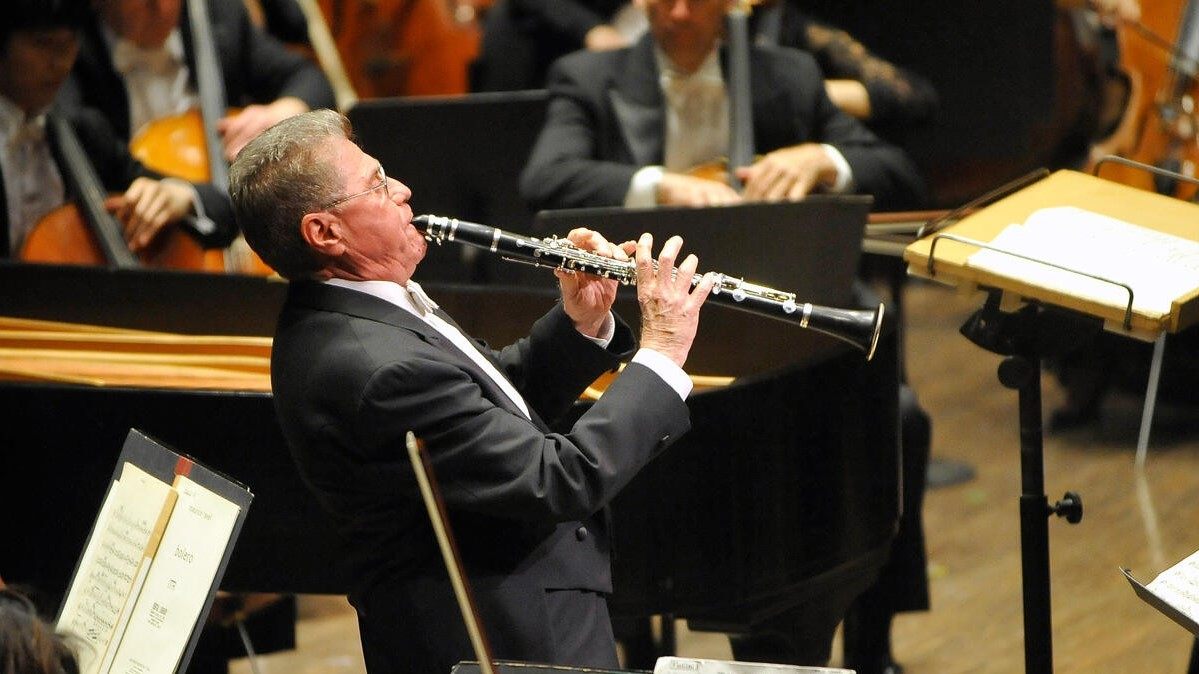 The legendary clarinetist Stanley Drucker passed away on December 19. He was 93.

Born in Brooklyn, Drucker entered the Curtis Institute of Music at the age of 15, but left after a year to accept a position with the Indianapolis Symphony Orchestra. He went on to become principal clarinetist of the Buffalo Philharmonic Orchestra. In 1948, Drucker joined the New York Philharmonic. His nearly five-decade-long tenure as principal clarinetist of the New York Philharmonic began in 1960. Stanley Drucker’s  62 years in the Philharmonic, adding up to more than 10,200 concerts, earned him a Guinness World Record. “He’s a legend,” said conductor Gustavo Dudamel in 2007. “The history of the orchestra is in him.”

Among Stanley Drucker’s numerous solo appearances with the New York Philharmonic was the Young People’s Concert, A Copland Celebration, which first aired on December 27, 1970. Conductor Leonard Bernstein gives a brief introduction to Aaron Copland’s Clarinet Concerto before the work is performed:

John Corigliano had the sound of Stanley Drucker and the New York Philharmonic in mind when he wrote his Clarinet Concerto in 1977. The Concerto was commissioned by the Philharmonic and was dedicated to Drucker and Leonard Bernstein. The piece feels like a concerto for orchestra as well as clarinet. In his program notes, the composer writes,

My associations as a child – attending rehearsals and performances with my father, who was then the concertmaster of the [New York] Philharmonic – gave me the opportunity of getting to know many of the men in the orchestra both as artists and friends. This feeling of intimacy governed my decision to make sure that my first work for the Philharmonic utilized the entire orchestra. I was aware that, with a wind concerto, this is a potentially dangerous thing to do – to solve problems of balance most such pieces are discreetly scored for small ensembles – but it provided me with a fascinating challenge.

My regard for the musicians of the Philharmonic also shaped their role in the accompaniment to this Concerto. In the concerto, each player has a chance to display solo virtuosity; often the work approaches being a concerto for orchestra in its demands. The soloist, Stanley Drucker, was first clarinetist of the Philharmonic in my youth. Knowing his special gifts enabled me to write music of unprecedented difficulty for the solo instrument, and gave me the idea that generates the first movement; the opening cadenza.

The first movement, Cadenzas, is magically atmospheric. It includes two cadenzas for the solo instrument. The first, subtitled Ignis fatuus (“Will-o’-the-wisp”), resembles a “phosphorescent flickering light” which is “almost audibly invisible.” (Corigliano) The second cadenza, Corona solis (“the crown of the sun”), consists of blazing interjections between the solo clarinet and the orchestra.

Corigliano wrote the second movement, Elegy, in memory of his father. At moments, ethereal strands of sound emerge in the violins. There is a tender duet between the solo violin and clarinet.

The final movement, Antiphonal Toccata, is a spacial tour-de-force. Distant, eerie tone clusters from five offstage horns add to a sonic dialogue. Corigliano quotes Giovanni Gabrieli’s 1597 Sonata Pian’ e Fort, a landmark work in the development of orchestration. The Concerto concludes with a chorale and a final, exuberant flourish.