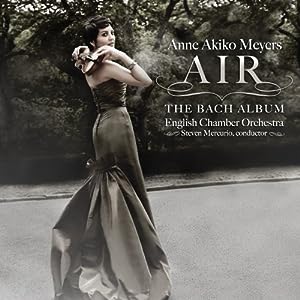 On Valentine’s Day this past February, violinist Anne Akiko Meyers released her newest CD, “Air” The Bach Album, featuring Bach’s A minor and E major Concertos, as well as the “Double” Concerto, accompanied by Steven Mercurio and the English Chamber Orchestra.  This recording, which I highly recommend, debuted at #1 on the Billboard Charts and has been a best seller on iTunes and Amazon.  It follows on the heels of other excellent Bach violin concerto discs by Hilary Hahn, Julia Fischer and Elmar Oliveira that have come out over the last ten years.

This CD will be especially enjoyable for Suzuki violin students of all levels and their parents.  Dr. Suzuki returns to the music of Bach throughout his repertoire, starting with the three Minuets in Book 1.  Suzuki includes the first movement of the Concerto for Two Violins, Strings and Continuo in D minor (BWV 1043), known as the “Bach Double” in Book 4. The rhythm of the first “Twinkle” Variation is actually identical to the opening rhythm of the “Double” Concerto.  Later, the entire Concerto No. 1 in A minor (BWV 1041) is found in Suzuki Book 7. Even the youngest child who is not close to studying these pieces will benefit from hearing this recording regularly.

Meyers recorded both parts of the “Double” Concerto in two different locations using two different Stradivarius violins.  While this isn’t the first time a violinist has recorded both parts, as you can hear in this clip of Jascha Heifetz, it may be the first time different violins have been used by the same player.  Meyers talks about the two violins, Bach’s music, and the process of making the recording in an interview on NPR’s All Things Considered, in this interview from Violinist.com and here:

Three smaller works round out the CD.  They are transcriptions of the “Air” from Orchestral Suite No. 3 in D Major (BWV 1068), the “Largo” from Concerto for Harpsichord in F minor (BWV 1056) and the Bach/Gounod Ave Maria which is based on Prelude No. 1 from Bach’s Well Tempered Clavier.  Here is a clip of Meyers playing the “Air” in a recital performance:

Anne Akiko Meyers dedicates the CD to her 96 year old grandmother and to the legendary luthier, Rene Morel who died late last year.  I was lucky enough to have Morel adjust my own violin, and I couldn’t help but think of his special gifts as I listened to the richness of the two Strads featured on the CD.

Next month I’ll post some older performances of this music, as well as some background.  For now, enjoy the wildly exhilarating last movement of the A minor concerto from Meyers’s CD: