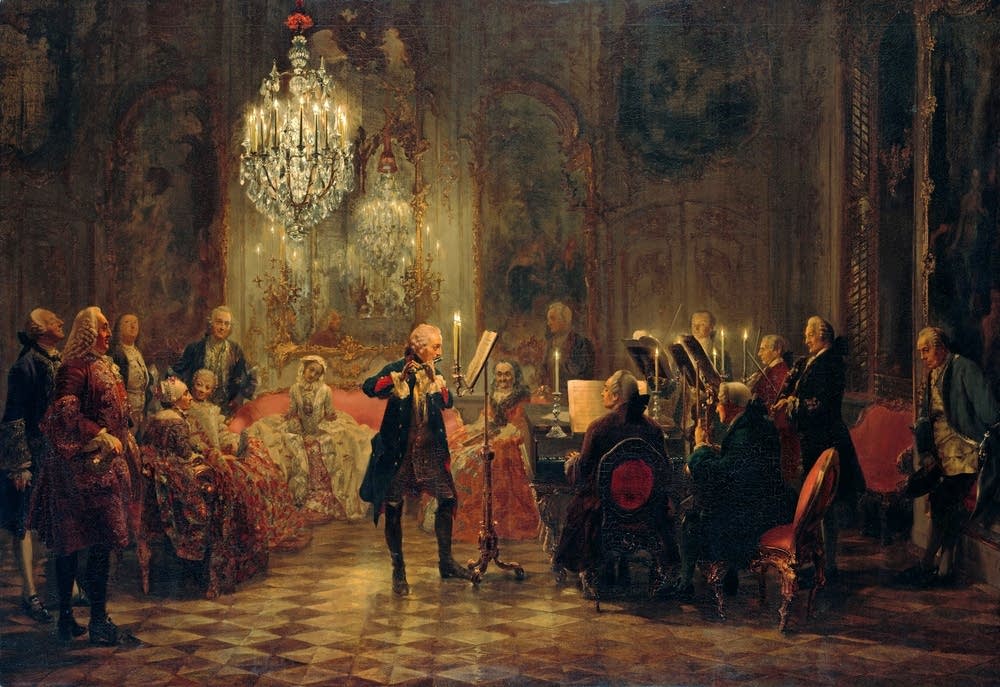 No one seems to be sure, exactly, about the roots of the sarabande as a dance form. It may have originated in Mexico or some other part of Latin America. It was popular in the Spanish colonies during the sixteenth and seventeenth centuries. The zarabanda was first mentioned in a 1593 poem, Vida y tiempo de Maricastaña, written in Panama by Fernando de Guzmán Mejía. As a dance, it was so spicy that it was considered indecent and was suppressed by Philip II. In his 1609 Treatise Against Public Amusements, the Jesuit priest Juan de Mariana called it “a dance and song so loose in its words and so ugly in its motions that it is enough to excite bad emotions in even very decent people.” The sarabande spread to Italy and eventually to France. Gradually, it shed its provocative associations and evolved into a slow, stately, court dance in triple meter with a string emphasis on the second beat. In the eighteenth century, it found its way into Baroque dance suites.

From the Baroque era to the twentieth century, composers have been drawn to the unique rhythmic feel of the sarabande. Here are eight examples:

Ennemond Gaultier (c. 1575-1651) was a French lutist and composer. In this excerpt from a 1996 recording by Paola Erdas, you can get a sense of the stately quality of the rhythm, with its emphasis on the second beat:

Composers from Vivaldi and Corelli to Handel wrote music based on the famous La Folia melody, which was, perhaps, the most popular expression of the Baroque sarabande. The third movement of Handel’s Suite in D minor for Harpsichord, HWV 437 is a Sarabande and variations on the La Folia melody. Here is a performance by Michael Borgstede:

J.S. Bach kept returning to the sarabande. We hear a beautifully serene example in the French Suite No. 5 in G major, BWV. In the D minor Partita for solo violin, the sarabande becomes a melancholy lament. Throughout the Cello Suites it emerges as a sublime, solitary statement. In the Aria which forms the bedrock of the Goldberg Variations, Bach puts the sarabande on a monumental pedestal. Here is a performance by Gary Cooper:

Norwegian Romanticist Edvard Grieg’s 1884 Holberg Suite, Op. 40 offers a nostalgic look back at the Baroque dance suites of the eighteenth century. Here is the lushly beautiful sarabande second movement, performed by the Norwegian Chamber Orchestra. Listen for the magical moments of “surprise” modulation:

The second movement of Claude Debussy’s 1901 keyboard suite, Pour le piano, evokes the stately nobility of the traditional sarabande through a dreamy, impressionistic haze. As the music develops, listen to the way it becomes more emotional and commands our attention with a sense of defiance. Then, in the final bars, it fades into one of the most amazing harmonic progressions imaginable. Here is Claudio Arrau’s recording:

Completed in 1934, Benjamin Britten’s Simple Symphony for string orchestra draws on music written during the composer’s youth. The third movement, entitled Sentimental Sarabande: Poco lento e peasant, suggests the same rhythmic feel of the Baroque sarabande with its emphasis on beat two. The middle section melts into dreamy nostalgia, almost suggesting a gentle lullaby. Here is a performance by the Orpheus Chamber Orchestra:

Here is the Sarabande et Cortege for Bassoon and Piano by French composer Henri Dutilleux. These two pieces were written in 1942 while Dutilleux was a student at the Paris Conservatory.

Here is the Sarabande from American composer Paul Creston’s 1937 Partita for violin, flute, and string orchestra. This music pays homage to the stately character and repeating bass line of the Baroque sarabande while evoking a sense of lamenting nostalgia. This recording features the Seattle Symphony and conductor Gerard Schwarz: