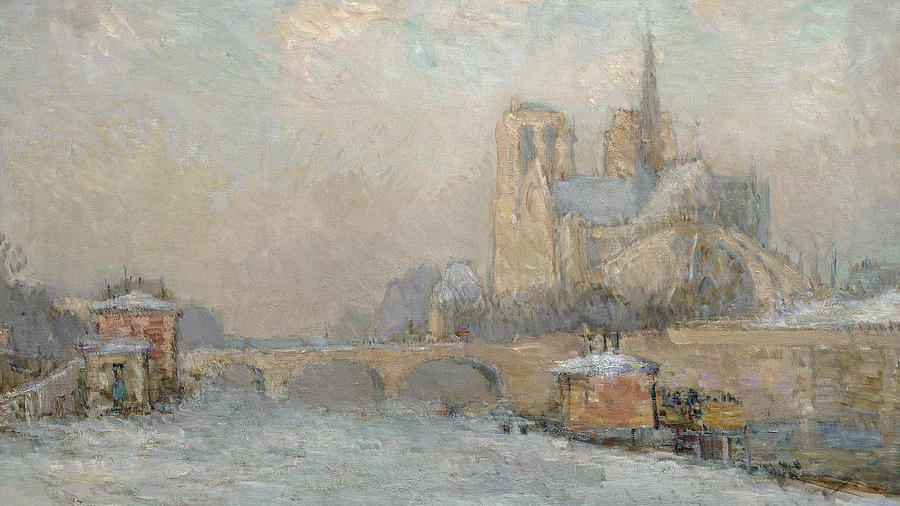 Yesterday, it was reported that the historic organ of Paris’ Notre-Dame Cathedral was not damaged in Monday’s devastating fire. The news inspired me to return to The Listeners’ Club archive in search of recordings featuring the mighty instrument. One of the most notable is Olivier Latry’s performance of the famous Toccata from Charles-Marie Widor’s organ Symphony No. 5 in F minor.

Olivier Latry has been one of Notre-Dame’s head organists since 1985. The proceeds from a concert he will be playing this week in Dresden will go towards the Cathedral’s restoration. Here is the translation of a statement Latry released, yesterday:

In these tragic moments for the Cathedral, you have been extremely numerous to send kind words of support, all more moving than the others, either by e-mail, SMS, FaceBook, Instagram or on the phone.

I will never thank you enough for that. I would have liked to respond personally to each of you, but given the urgency of the situation, it is unfortunately not possible for me, at least for the moment. I hope you’ll understand.

Notre-Dame, who had resisted revolutions and wars, burned in a few moments. 855 years destroyed in four hours … Like you, I feel terribly sad, with contained rage, total sorrow. The images that we have seen are horrible. How not to think that we are in a bad dream? Reality comes back to us, unfortunately.

Despite all the damage in the Cathedral, the organ miraculously escaped the flames, as well as the water supposed to extinguish them. It is very dusty, but will continue to enjoy us as soon as the building will be restored. When? No one knows yet. « Destroy this temple and in three days I will raise it up. » (John, 2). It will surely take more time in Notre-Dame, but I still live with great confidence and hope.

From César Franck and Camille Saint-Saëns to Widor, there is a long and distinguished tradition of French organ music. Here are three examples from the twentieth century, performed on the organ at Notre-Dame. All three pieces enter a serene, dreamy, atmospheric world of awe-inspiring mystery:

This is the final movement (God Among Us) of Olivier Messiaen’s La Nativité du Seigneur (The Nativity of the Lord or The Birth of the Saviour), written in 1935. (We heard another movement from this piece in an earlier post). Messiaen wrote that these nine “meditations” were inspired by Alpine mountains, as well as the stained glass windows of medieval cathedrals. The massive final chord fades into Notre Dame’s eight and a half second acoustical delay. Here is Olivier Latry’s recording:

A student of Widor, Louis Vierne was Notre Dame’s head organist from 1900 until 1937. Paul Verlaine’s poem inspired Gabriel Fauré’s Op. 46 Songs and Debussy’s famous piano piece, as well as this music. Clair de Lune is part of Vierne’s 24 Fantasy Pieces. Its opening chord sounds almost identical to the first chord of Debussy’s Clair de lune. But Vierne’s music moves in a much different direction, floating into a dreamy world of wandering chromaticism and suddenly, almost accidentally, finding a transcendent resolution only at the final cadence. This 1970s recording features Pierre Cochereau, Notre Dame’s head organist from 1955 until 1984:

The Hungarian organist, János Pálúr, gave this performance of Maurice Duruflé’s Scherzo for Organ, Op. 2 at Notre Dame only a few weeks ago on March 23. There are echoes of the pure strands of plainchant which would have floated through the Cathedral in its earliest days. Occupying a serene, meditative place, this is music which seems unconcerned with where it is going. Instead, it is content to enjoy the sanctity of the moment.