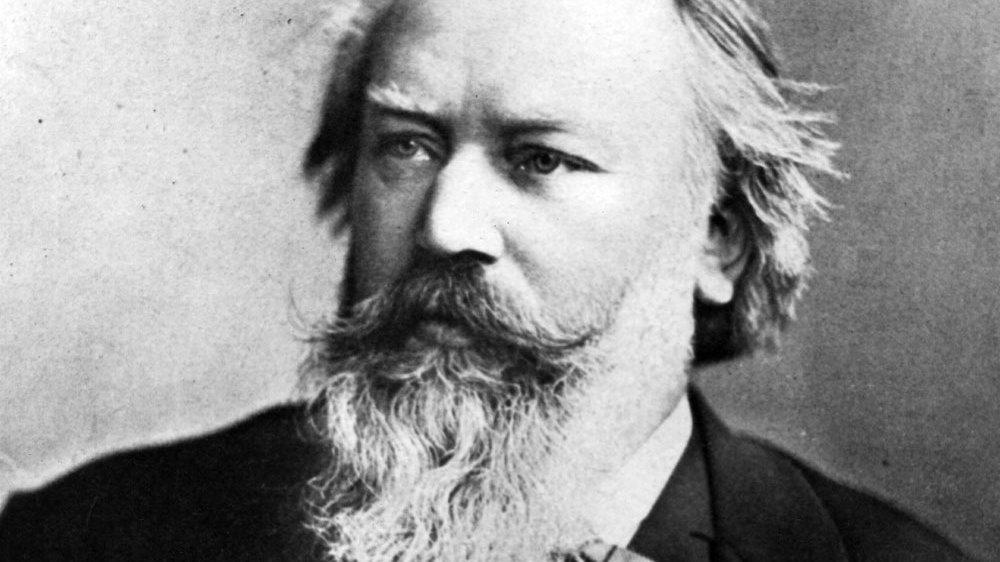 This powerful, attention-demanding proclamation flings open the door to a ferocious “con brio” first theme which seems to growl with intensity. Filled with wide, octave-exceeding leaps, it’s a theme which is always in motion, restlessly searching for a way forward, and veering continuously between major and minor. Rhythmically, it sets up our expectations, and then pulls us in unexpected directions with vast, irregular phrases which continue to reach higher. Brahms frequently knocks us off balance with hemiolas and other examples of competing rhythmic “grooves.” We end up floating in a sea of ambiguity where we no longer know where the downbeat lies. But listen closely, and you may hear echoes of the opening of another Third Symphony which pulls and pushes with an equal sense of rhythmic conflict—Schumann’s Rhenish Symphony, written some thirty years earlier in 1850. In both opening themes, we get a collision between two competing levels of triple meter. Brahms’ theme is actually a direct quote of this mysterious moment near the end of the first movement of Schumann’s Rhenish. Amazingly, a passing musical cell in Schumann’s Symphony rises to heroic prominence in Brahms’.

But let’s return to those three mighty opening chords, which Leonard Bernstein called “a Homeric invocation of the muse.” The top pitches of these chords—F, A-flat, F—form a motivic cell out of which the entire Symphony develops. As the first theme begins, listen to the bass line and you will hear these three notes. This motive is a persistent presence throughout the first movement, sometimes emerging prominently and other times slipping beneath the surface. These three pitches—F, A-flat, F—also form a musical cryptogram which outlines the motto, “Frei aber froh,” or “Free but happy.” This was Brahms’ twist on the similar personal motto of his friend, the violinist Joseph Joachim, “Frei aber einsam” (“Free but Lonely”), which inspired the collaborative F-A-E Sonata, written in tribute to Joachim in 1853.

As you listen to the first movement (Allegro con brio), notice the awe-inspiring sense of motion and continuous, unfolding development. As the exposition reaches its final bars, it hits the roadblock of those opening chords, returning us to the beginning. When we reach the end of the exposition the second time, listen to the triumphant way the music “breaks through” into the ferocious development section.

The second movement (Andante) combines serene, sensuous beauty with an underlying sadness. The gently wandering solo clarinet and bassoon converse with an array of other instrumental voices. At one moment the melody dissolves into single, floating strands before finding itself in a sea of three beats against two. There is an incredible moment near the end of the movement in which a seemingly endless phrase seems to give us the musical equivalent of a passionate embrace. Yet the final bars fall back into quiet, autumnal beauty, and resolve in a deep, shimmering C major chord. Allow your ear to drift up and down this chord to take in all of its distinct and colorful voices.

The third movement (Poco Allegretto) is filled with a similar autumnal beauty and sadness. Instead of the scherzo we might expect, Brahms gives us a brief and melancholy intermezzo. Listen carefully to all of the inner voices which swirl around this achingly nostalgic melody, heard first in the cellos and later in the plaintive solo horn, oboe, and other instruments. Notice the way C minor suddenly takes an unexpected turn into sunny C major.

The final movement (Allegro—Un poco sostenuto) is a thrilling drama of motion and energy. It begins with a single, suspenseful musical line which gives us a visceral feeling of spinning, forward motion. Listen to the way this theme gradually picks up steam, then explodes with a sudden burst of ferocity. A triumphant second theme turns suddenly into major, giving us a sense that the Third Symphony is hurtling towards the kind of transcendent ending we get in Beethoven’s Fifth Symphony. There are even allusions to the four-note rhythmic motive of Beethoven’s Fifth, especially throughout the heroic struggle of the development section. But then, gradually, we become aware that all of this furious motion and intensity is dissipating. The moment of earth-shattering transfiguration we expected arrives instead, in calm, increasingly serene waves. The first movement’s opening theme returns as a dreamy remembrance. Like an old locomotive rolling into the station and letting out all of the steam, the final chords bring the ultimate repose—quiet string pizzicato followed by a passive wind chord. This is the same wind choir which opened the first movement, bringing to mind Clara Schumann’s comment that “All the movements seem to be of one piece, one beat of the heart…”

Here is Claudio Abbado’s 1989 recording with the Berlin Philharmonic: