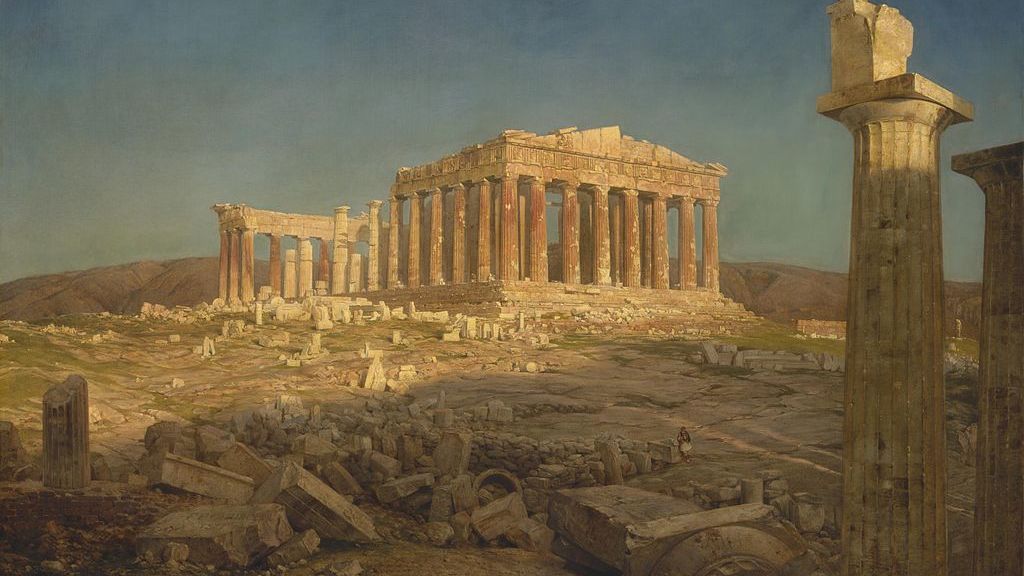 In 1811, Beethoven received a commission to compose incidental music for two Hungarian-themed plays by August von Kotzebue, King Stephen and The Ruins of Athens. The plays were written to commemorate the opening of a magnificent new theater in the Hungarian city of Pest on the banks of the Danube (now the eastern part of unified Budapest). The theater’s construction was funded by Franz I, the last Holy Roman Emperor and the first emperor of Austria, as a way of politically unifying Hungary with the interests of the Austrian Habsburg monarchy.

The Ruins of Athens was a masterful piece of political and cultural propaganda. In the play, the goddess Athena wakes up from a thousand year sleep and laments the state of her ruined city, which is occupied by the Ottoman Empire. With the assistance of Hermes, Athena joins Franz I at the opening of Pest’s new theater in celebration of the triumph of the muses of comedy and tragedy, Thalia and Melpomene. Athena crowns a bust of Franz I, erected by Zeus, and Hungary takes its place as the new Athens.

Beethoven’s incidental music transformed the play into a virtual operetta or Singspiel. We think of Beethoven as a composer who sculpted motivic cells into cosmic symphonies through a process of painstaking sketches. In contrast, this music was written quickly while the composer rested at the Bohemian spa of Teplitz. It is enduring popular music of the highest quality.

The opening of the Overture to The Ruins of Athens reveals a desolate and foreboding landscape. A hushed, ominous G minor is punctuated by wrenching dissonances. With the entrance of the solo oboe, sunshine breaks through the clouds. Celebration erupts amid a jubilant G major. In a fun-loving musical tribute to the muses, the mask of tragedy is replaced by comedy.

The most famous music from Beethoven’s incidental music for The Ruins of Athens is the spirited Turkish March. With cymbals blazing, it seems to begin in the distance, pass by, and then fade into the distance. In this excerpt, the Turkish March follows the exotic Chorus of Dervishes:

For the Turkish March, Beethoven returned to a melody he had written two years earlier. This charming original melody inspired six variations. Light years from the Op. 59 String Quartet we heard on Wednesday, this is the ultimate carefree party music of the early nineteenth century:

Franz Liszt created a Fantasy on Themes from the Ruins of Athens for piano and orchestra. Liszt’s earlier 1846 solo piano Capriccio transforms Beethoven’s Turkish March and Dervishes Chorus into a dazzling virtuoso tour de force. Beginning with an Andante fantastico filled with “diabolical trills,” the piece concludes with a thrilling eruption of keyboard fireworks. This performance features Ian Yungwook Yoo:

2 thoughts on “Beethoven’s “The Ruins of Athens”: Politics and the Triumph of the Muses”