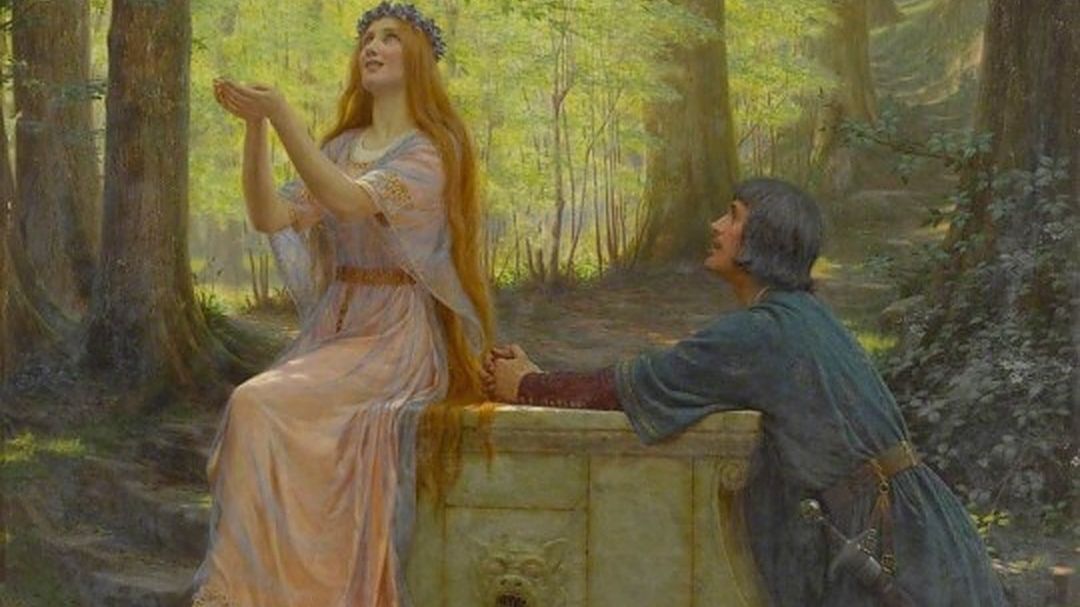 Maurice Maeterlinck’s 1898 French symbolist play, Pelléas and Mélisande, centers around a doomed love triangle. Set in an ancient ruined castle and a dense forest, it “expresses a sense that human beings understand neither themselves nor each other nor the world.” (Bettina Knapp)

Pelléas et Mélisande tells the story of a young and beautiful girl who marries one man, falls in love with another, and dies. But the play is neither about youth nor beauty, neither about love nor death. Pelléas et Mélisande deals with an intriguing and complex irony, the presentiment of disaster at the moment of happiness and calm. To the extent that the work succeeds, we experience not the presentiment but a modal effect appropriate to a realization about life that is part sad and part comic, part startling and part puzzling, but totally inevitable.

Although the play never achieved popular success on the stage, it anticipated the work of Samuel Beckett. It also inspired incidental music by Gabriel Fauré and Jean Sibelius, a symphonic poem by Arnold Schoenberg, and Claude Debussy’s only completed opera.

In 1898, Fauré accepted a commission to write incidental music for the play’s first English language production in London. The composer worked under a great time constraint.  In a letter to his wife, he wrote:

I will have to grind away hard for Mélisande when I get back. I hardly have a month and a half to write all that music. True, some of it is already in my thick head!

Fauré recycled previously written music, most notably the famous Sicilienne, which may have been conceived originally for the incidental music of Moliére’s Le Bourgeois gentilhomme. He relied on his student, Charles Koechlin, to provide the orchestrations for the small theater ensemble. Later, Fauré returned to the music and provided his own orchestrations for the concert suite.

Fauré’s music is elegant, serene, and magical. The Prélude (Quasi Adagio) is filled with both sensuality and tragic foreboding. Pastel colors emerge as the flute and other wind instruments blend with the strings. A series of instrumental voices, including the solo flute, oboe, clarinet, and cello take the stage in a shimmering musical drama. In the Prélude’s final moments, a horn call echoes through the forest.

The second movement, Fileuse (Andantino quasi Allegretto) is a “spinning song.” A pastoral melody in the oboe rises above incessant triplets in the violins which depict Mélisande at a spinning wheel. A dialogue emerges between the oboe and bassoon, while the clarinet initiates one of the score’s recurring themes.

The Sicilienne (Allegretto molto moderato) is one of Fauré’s most beloved pieces. Introduced by the flute and harp, its buoyant melody begins in veiled  G minor, flirts with major, and breaks into the sunlight at its final cadence. In the context of the play, this flowing music is evocative of the water fountain in which Mélisande loses her wedding ring. It accompanies the blissful meeting of Pelléas and Mélisande.

The Suite concludes with The Death of Mélisande (Molto Adagio). Set in the melancholy key of D minor with modal inflections, it is a solemn funeral procession. The flute is heard in its haunting lowest register amid a quiet trumpet call and plodding timpani drumbeats. The final bars drift away into eternal lament.

François Leleux and the Frankfurt Radio Symphony Orchestra gave this performance on May 12, 2017: