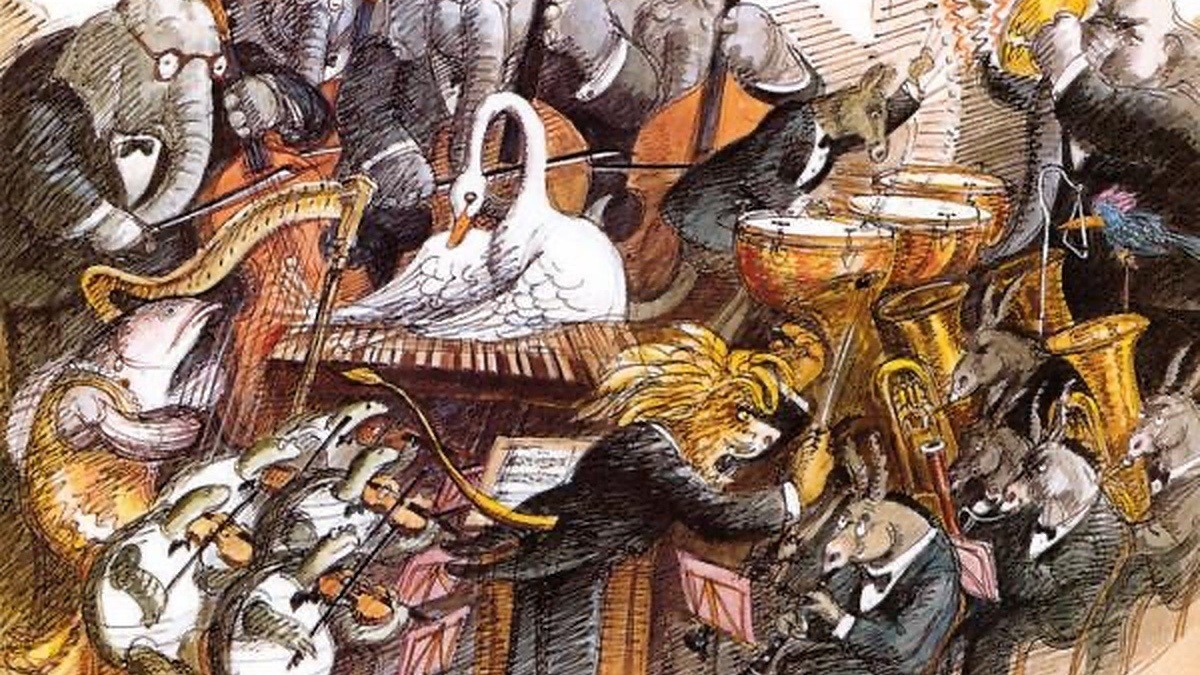 In February of 1886, Camille Saint-Saëns set aside work on his Third Symphony to engage in a brief burst of compositional frivolity. He admitted to his publishers that it was “such fun” he could not resist.

The piece in question was The Carnival of the Animals, a humorous musical suite made up of fourteen short, parody-filled movements. Each movement depicts a specific animal and has inspired numerous texts, which include poetry written by Ogden Nash in 1949. In its original form, the piece was scored for a chamber ensemble which was anchored by two pianos and included glass harmonica (now usually played by the glockenspiel or celesta) and xylophone. Perhaps originally intended for the composer’s students, the Suite received only private performances. Concerned that The Carnival of the Animals would damage his reputation as a “serious” composer, Saint-Saëns insisted that the Suite not be published or publicly performed during his lifetime. Eventually, it was published in 1922 and has since become one of the most famous and beloved works of Saint-Saëns.

I. Introduction and Royal March of the Lion

The strings and piano evoke persistent pecking and the crowing of a rooster’s “cock-a-doodle-doo.”

This movement depicts the fastest of animals, with the pianists running up and down the keyboard in a feat of finger-twisting agility.

The famous Galop infernal from Offenbach’s zany opera, Orpheus in the Underworld is slowed to a crawl.

With a cumbersome waltz marked Allegro pomposo, the basses lumber. This theme is based on two pieces which are normally light and effervescent—Mendelssohn’s Scherzo from A Midsummer Night’s Dream, and Berlioz’s Dance of the Sylphs from The Damnation of Faust.

Ascending and descending triads in the piano with grace notes suggest the hopping motion of Australia’s famous marsupials.

This movement is filled with bright colors and motion which evokes magical fluid depths. The high, shimmering keyboard lines create a distinctive sound that we hear throughout the music of Saint-Saëns.

In the violins, we hear the “hee-haw” braying of a donkey. Some listeners have speculated that in this brief movement, Saint-Saëns was making a subtle reference to the commentary of music critics.

IX. The Cuckoo in the Depths of the Woods

Amid the piano’s pensive chords, the repeated call of the cuckoo can be heard in the clarinet.

High above the sounds of the jungle, the flute swoops and dives with the freedom of a bird gliding through the air.

Pianists are satirized as the craziest animals of all. The pianists run up and down the keyboard with a parody of endless scales and Hanon exercises. We get a sense that the activity is more athletics than music. Pounding triads announce the next mechanical line.

The sound of the xylophone suggests hollow bones knocking together. In this movement, Saint-Saëns combines fragments of Rossini’s The Barber of Seville and Twinkle, Twinkle, Little Star and the French patriotic song, Partant pour la Syrie, with a quote of his own Danse macabre.

Just before the Suite’s finale comes its most soulful and enduring moment. The cello depicts the serene motion of the swan gliding on water.

The Carnival of the Animals concludes with a frolicking ballet-style finale, in which all of the creatures reappear in a grand zoological procession.

This 1980 recording features Cristina Ortiz and Pascal Rogé with Charles Dutoit and the London Sinfonietta: