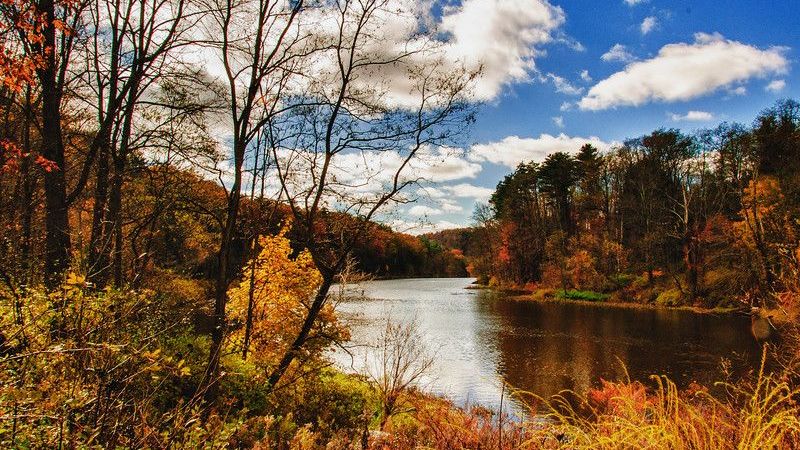 On a June weekend in 1908, Charles Ives and his wife, Harmony Twichell, vacationed in the rolling Berkshire Hills. A hiking trip led the newly married couple by the Housatonic River near Stockbridge, Massachusetts. Ives recalled,

We walked in the meadows along the river, and heard the distant singing from the church across the river. The mist had not entirely left the river bed, and the colors, the running water, the banks and elm trees were something that one would always remember.

This idyllic New England scene inspired The Housatonic at Stockbridge, a dreamy and fleeting orchestral soundscape with a title evocative of a painting. Ives began sketching the piece two days after retiring home from the trip. It formed the final movement of his orchestral tryptic, Three Places in New England, completed in 1914.

As with much of Ives’ music, The Housatonic at Stockbridge feels timeless, as if we’re “turning up the volume” briefly on a haunting and eternal drama. Emerging abruptly out of silence, the piece reaches a deafening, cosmic climax of pure dissonance. Then, its serene voices linger and drift away as suddenly as they came. Perhaps this is the same eternal “current” we hear in the chorale which underlies Ives’ famous The Unanswered Question.

Throughout The Housatonic at Stockbridge, we hear hazy echoes of hymn tunes—indistinct dreamlike intimations of the the old New England hymn, Dorrance as well as the melodically similar Missionary Chant. Shrouded in wispy fog, these voices combine to form a ghostly sonic collage. The composer accesses the transcendental sound world which fascinated his father, George Ives, an accomplished Civil War band leader whose experiments anticipated the work of John Cage.

In 1921, Charles Ives returned to this music, transforming it into a song. The text was taken from the 1896 poem, Ode to the Housatonic at Stockbridge, by Robert Underwood Johnson. An excerpt of the poem was printed in the score of the original orchestral version. While composers such as Mahler used songs as virtual sketches for larger symphonic movements, here Ives seems to have moved in the opposite direction. Although closely based on the music we heard above, the song opens the door to a completely new experience. In this context, it feels like a different piece.

Featured Image: “Along the Housatonic River” by Don Watson

1 thought on “Ives’ “The Housatonic at Stockbridge”: The Eternal River of Time”