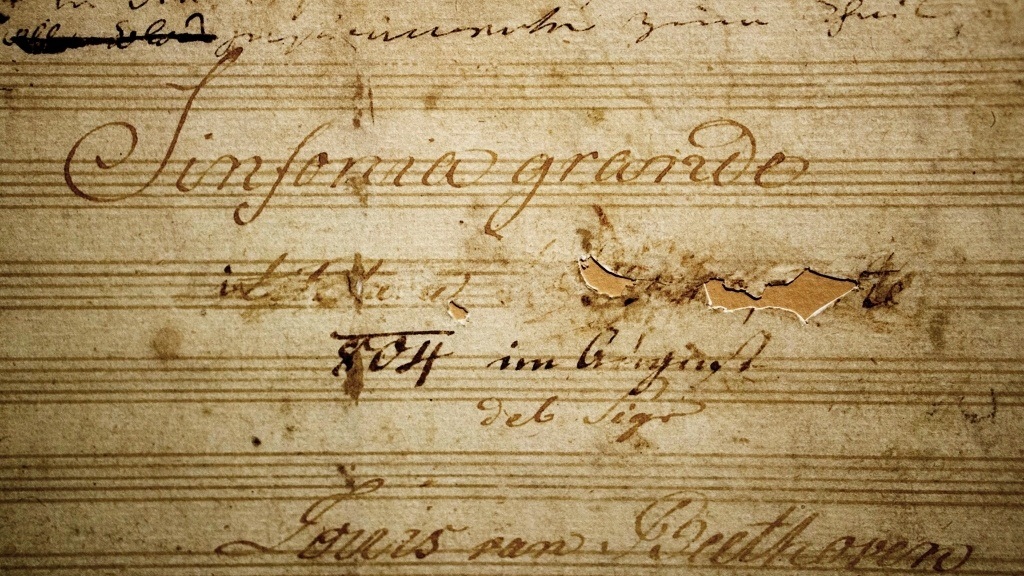 The music of Beethoven, perhaps more than any other composer, embodies the spirit of revolution.

It is music filled with ferocious struggle and ultimate transcendence. Heralding the dawn of Romanticism, it signifies the ripping apart of an old order and the emergence of something new. Genteel, aristocratic elegance is replaced by edginess, disruption, and pathos. We hear the music of the court transitioning to the music of the public concert hall. An expanding orchestra raises the decibel level. In the most intense fortissimos, Beethoven’s orchestra produces a deep growl. Additionally, in this turbulent music, we can sense profound political changes. The ideals of the American and French Revolutions are on the march, initiated by the bold proclamation of innate and fundamental rights such as “Life, Liberty, and the Pursuit of Happiness.”

Nowhere is the spirit of revolution more pronounced than in Beethoven’s Symphony No. 3 in E-flat Major, subtitled the “Eroica.” While the direct influence of Haydn can be heard in the First and Second Symphonies, something radically new is unleashed in the Third. Its enormous scale and technical demands were unprecedented.  The first performances left many listeners bewildered. One critic called it the “longest and perhaps most difficult of all symphonies.”

Beethoven began sketching the Third Symphony in 1802, during a period of profound personal crisis which he outlined in the famous Heiligenstadt Testament. Overcoming thoughts of suicide and coming to terms with his declining hearing, he emerged victorious. At the same time, he was at an artistic turning point, declaring, “I am not satisfied with my works up to the present time. From today I mean to take a new path.”

The Symphony’s original subtitle was “Bonaparte” in honor of Napoleon, a figure the composer associated with the ideals of the French Revolution. Yet when he learned that Napoleon had crowned himself Emperor of France in 1804, Beethoven crossed out the dedication so vigorously that the title page on at least one manuscript was ripped. The new subtitle became, “Sinfonia Eroica (Heroic Symphony)…composed to celebrate the memory of a great man.” The composer’s student, Ferdinand Ries, recounted the following story:

I was the first to bring him the news that Bonaparte had proclaimed himself emperor, whereupon he flew into a rage and cried out: ‘Is he too, then, nothing more than an ordinary human being? Now he, too, will trample on the rights of man, and indulge only his ambition!’ Beethoven went to the table, took hold of the title page by the top, tore it in two, and threw it on the floor. The first page was rewritten and only then did the Symphony receive the title Sinfonia Eroica.

Two ferocious E-flat major hammer blows launch the first movement (Allegro con brio) into motion. As the beautifully singing first theme emerges in the cellos, we are swept into a drama of unrelenting forward motion and searing intensity. It begins with shocking suddenness. Gone is the traditional, expansive, gradually unfolding introduction. Instead, with an eruption of energy, we plunge headlong into the exposition. A mighty, unstoppable, self-organizing force has been released. Immediately, we are met with conflicting rhythmic countercurrents and violent, unexpected jabs. We feel the rhythm on a visceral level. The musicologist Donald Tovey once marveled that many of Beethoven’s themes “can be recognized by their bare rhythm without quoting any melody at all.” Harmonically, the opening theme’s sublime simplicity (outlining a E-flat major triad) is shattered by the dissonant surprise of C-sharp.

In the middle of the adventurous development section, all of the rising tension and conflict reaches a moment of spectacular climax. The forceful hammer blows from the opening bars return, repeating with unrelenting persistence and dislocating the underlying rhythm with a larger, superimposed feeling of three. The gears of this great symphonic machine grind and sputter. Heroic struggle and triumph collide, unleashing dissonances that would be at home in the music of the twentieth century. In an upending of traditional symphonic form, this development section goes on to produce a brand new theme filled with longing and lament. From thundering fortes, we move to hushed string tremolo, opening the door to the mysterious “false entrance” of the solo horn. This moment is so strange that it was first assumed to be a copying error. It even confounded the wild musical innovator Hector Berlioz who called it “an absurdity.” This premature announcement is soon “corrected” by a new solo horn statement a few moments later. Near the end of the movement, there is an extraordinary moment when the forward motion stops. For the first time, we get the sense that this developing symphonic “organism” may have reached its limit with no new material to explore. After a few searching measures, the flow returns and the first movement concludes with a high-flying coda.

The second movement (Marcia funebre: Adagio assai) is a solemn funeral march, set in the tragic key of C minor. A haunting melody emerges over ominous, repeating drum roll figures. There are ghostly echoes of the sounds of the French Revolution in this forlorn military procession. (Mahler’s Fifth Symphony opens with the same drum tap figure in the solo trumpet, initiating a similar funeral march). The theme is picked up by the lamenting solo oboe. Tragedy and terror blend with stoicism, prayerful contemplation, and reverence. A second episode brings a sudden shift to sunny C major, leading to a soaring and heroic climax punctuated by trumpets and timpani. The dramatic intensity of this music must have been overwhelming for the first audiences, who might have been expecting a traditional classical slow movement. Even more surprising must have been the mighty fugue, initiated by the second violins and moving around the orchestra, as a soaring, cosmic statement. In the final bars, the theme disintegrates into fragments. The ghostly funeral procession fades into the distance.

The opening bars of the Scherzo give us a sense of hushed, feverish excitement. It’s the kind of electrically charged exhilaration that barely can be contained. There are hints of the comic dialogue of Rossini’s operas amid these playfully dancing lines. Then comes the inevitable moment where the lid blows off and the music erupts into a gruff and boisterous celebration. There is a delightful sense of trickery in the underlying rhythmic groove, which alternates between a feeling of three and two. (The meter remains in a rapid 3/4). Most symphonies of this period were scored for two horns. For the Eroica, Beethoven uses three. In the Scherzo’s trio section, the horns take centerstage as benevolent, heroic characters.

The final movement (Finale. Allegro molto – Poco Andante – Presto) begins with a furious torrent of notes. It’s as if Beethoven is preparing the table by sweeping aside everything that came before. Following this dramatic introduction, we’re presented with a humorous anticlimax. It’s a sparse, tiptoeing contrapuntal line in search of a melody. This lonely strand blossoms into a series of variations. Who needs melody when an inner voice can be developed so thrillingly? The true melody arrives with the entrance of the oboe, more than two minutes into the movement. It’s a cheerful and vivacious theme Beethoven used in several earlier compositions, including the ballet music for The Creatures of Prometheus. This theme becomes a springboard for a series of adventurous variations which range from vigorous fugues and sparkling flute virtuosity to a wild gypsy dance in G minor. Darkness falls in the coda section amid hushed, tense anticipation. Then, with a sudden surge of energy, the Presto kicks into gear and the Third Symphony is brought to a joyful and celebratory conclusion. With Beethoven’s Finale, a mighty symphonic journey reaches its culmination. Michael Steinberg observes that “a final and startling newness in the Eroica is the way the center of gravity is shifted from the first movement to the last.”

This exhilarating 2016 performance, featuring Andrés Orozco-Estrada and the Frankfurt Radio Symphony, uses the horns and trumpets of Beethoven’s time. Listen to the edgy tonal impact of these period instruments. Also, notice the incredible clarity of voices:

Featured Image: Beethoven crossed out the dedication to Napoleon so vigorously on the manuscript’s title page that the paper was torn.