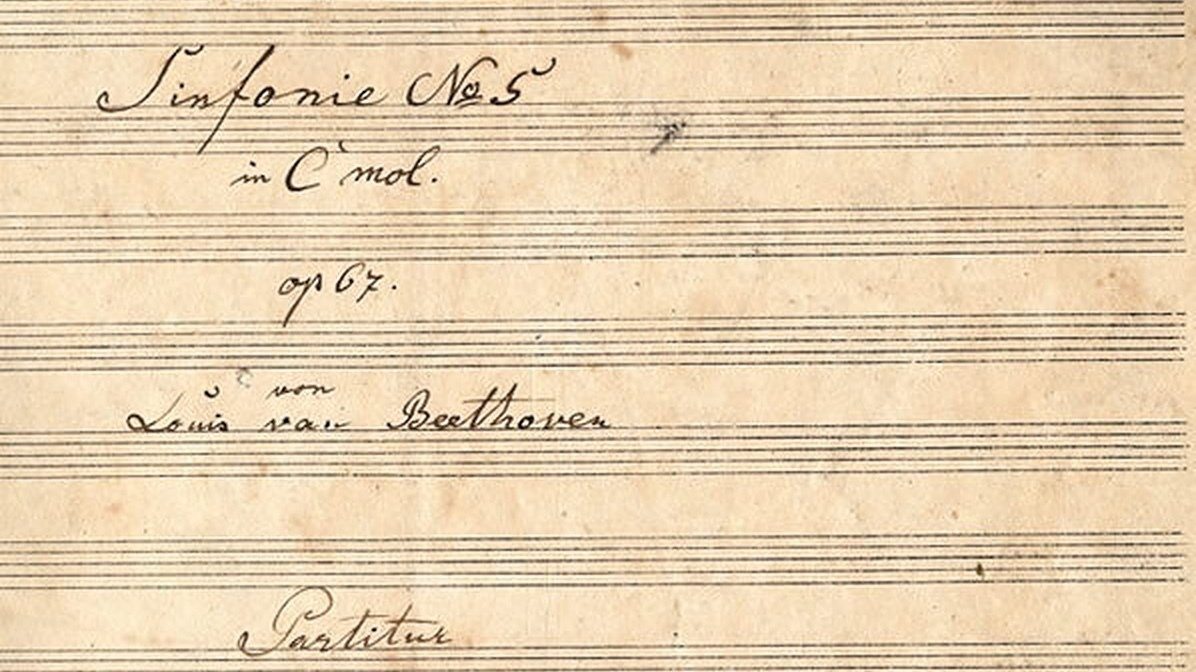 The four notes which open Beethoven’s Fifth Symphony outline what is perhaps music history’s most iconic motif. It’s a motif which has been subjected to pop culture cliches and dubious superimposed poetic associations, such as “fate knocking at the door.” This motivic kernel, perhaps derived from Luigi Cherubini’s 1794 French Revolution anthem Hymne au Panthéon, is the seed out of which the entire Fifth Symphony develops. Preceded by a silent, suspenseful downbeat, it explodes with exhilarating ferocity, launching the Symphony’s heroic journey from dark, turbulent C minor to the transcendence of C major.

The Fifth Symphony was premiered in Vienna on December 22, 1808 at a time when Beethoven was facing increasing deafness and the armies of Napoleon were marching across Europe. The under-rehearsed performance was part of a marathon, five-hour-long concert of Beethoven’s music presented at an unheated Theater an der Wien. (The Sixth Symphony, the Fourth Piano Concerto, and the Choral Fantasy were also on the program). We can only imagine the effect this bold, revolutionary music had on the first audiences. The author and critic E.T.A. Hoffmann called the Fifth Symphony “one of the most important works of the master whose stature as a first-rate instrumental composer probably no one will now dispute…the instrumental music of Beethoven opens the realm of the colossal and the immeasurable for us.” In an 1813 essay, Hoffmann wrote,

How this wonderful composition, in a climax that climbs on and on, leads the listener imperiously forward into the spirit world of the infinite!… No doubt the whole rushes like an ingenious rhapsody past many a man, but the soul of each thoughtful listener is assuredly stirred, deeply and intimately, by a feeling that is none other than that unutterable portentous longing, and until the final chord—indeed, even in the moments that follow it—he will be powerless to step out of that wondrous spirit realm where grief and joy embrace him in the form of sound…

Beethoven’s Third Symphony, the “Eroica,” was monumental and groundbreaking in scale and length. In contrast, the Fifth Symphony is a whirlwind of taut, compressed energy. The first movement (Allegro con brio) develops in short, unrelenting motivic cells. The fateful opening motif lurks around every corner. As the strings and woodwinds trade the second theme, the motif emerges sneakily in the low strings. It consumes the fiery and tense development section, at one moment breaking down into disjointed rhythmic strands before regrouping with renewed power. The mysterious oboe cadenza in the recapitulation remains one of the movement’s inexplicable surprises. The brash, militant sounds of the French Revolution abound. The coda surges to a furious conclusion. The hushed anxiety of the final bars is interrupted by the brusk, forceful hammer blows of the cadence.

The second movement (Andante con moto), set in the unexpected key of A-flat major, is an example of double variation form. Here, variations are developed in two alternating themes. Tender introspection meets the sounds of a Revolutionary military march. The courtly, aristocratic elegance of Mozart and Haydn is replaced by grandiose fanfares, punctuated by trumpets and drums. Listen carefully, and you will hear the “short-short-short-long” rhythmic motif return in new guises. It concludes the first theme and rises to prominence in the second theme’s spirited march.

Beethoven abandons the classical minuet and instead gives us a Scherzo third movement. The movement opens with hushed mystery and an arpeggiated figure which pays subtle homage to the final movement of Mozart’s Symphony No. 40. Suddenly, the “short-short-short-long” rhythm returns, this time as a heroic statement in the horns. The trio section erupts with a vigorous fugue which moves from the depths of the orchestra upward. When the Scherzo returns, it comes in the form of quietly tiptoeing pizzicati and woodwind staccatos. The first audiences would have expected a repeat, verbatim, of the original music. They must have held their breath and listened with rapt attention to this sudden extended decrescendo. What follows would have been even more unprecedented. Rather than a conventional ending, the movement dissolves into a bridge filled with intense mystery and expectation. A cosmic crescendo leads to the triumphant opening of the fourth movement.

It’s a heroic proclamation which begins with the outlining of a C major triad. The powerful and transformative voices of the three trombones change the character of the sound. This was one of the earliest symphonies to use the trombones. As the movement progresses, there are two additional newcomers, the piccolo and the deep contrabassoon. Again, we hear music infused with the “short-short-short-long” rhythmic motif. (You’ll hear it in the basses in this passage). Notice the way a passing inner voice underlying the second theme becomes an exalted statement at the end of the development section. A brief recollection of the Scherzo precedes the thunderous recapitulation. The gradually accelerating coda brings joyful and celebratory musical fireworks. The commentator Charles Rosen believed that the repeating C major cadential chords in the final bars are necessary “to ground the extreme tension of this immense work.” Indeed, Beethoven’s Fifth Symphony unleashes a new kind of intensity and delivers the ultimate dramatic journey from struggle to transcendence.

Here is John Eliot Gardiner’s period performance with the Orchestre Révolutionnaire et Romantique. Interestingly, Gardiner asks the trombones to stand during their initial entrance in the final movement:

Featured Image: A manuscript copy of the Fifth Symphony from 1809